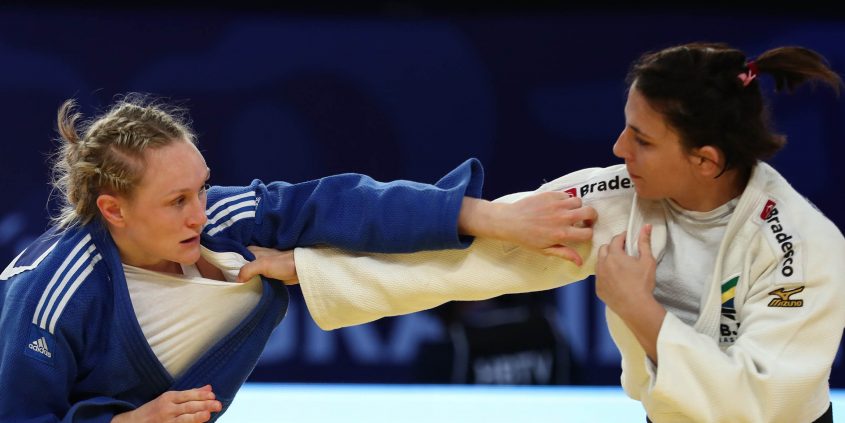 It is a busy weekend for GB Judo as a squad of 28 athletes travel to Germany for the Saarbruecken European Cup as 12 of the junior squad take to the mat in Paks, Hungary.

In a packed field of 477 competitors in Germany, the Senior squad will be looking for valuable time on the mat as they prepare for the World Championships in Hungary in just over a months time.

With high hopes of medals throughout the weekend, Howell has medalled at her last four events with four bronze medals at Grand Prix and European Open level. A medal in Germany would be the perfect preparation for the Wolverhampton judoka.

The British team have great strength in depth from across the board at all weight categories so are able to field a team including the likes of Paralympians Chris Skelley (-100kg) and Jack Hodgson (+100kg) as they look to further their preparations for the IBSA European Championships taking place in Walsall in August.

The weekend will lead into an international standard training camp which will offer the athletes a chance to train alongside the best judoka within their respective weight categories.

Competition for the senior squad starts on both days at 0800 UK time (0900 local). You will be able to find full results here once the competition has been completed

Elsewhere in Paks, Hungary, a strong squad of 12 juniors will be eager to impress and develop their competition judo. The squad including the likes of Eric Ham (-73kg), Jamal Petgrave (-90kg), Wesley Greenidge (+100kg), Olivia Piechota (-48kg) and Acelya Toprak (-57kg) own a host of European/National titles between them and will be looking for success in Hungary.

Eric Ham (-73kg) has demonstrated that he has the skills needed to medal consistently with impressive performances at Junior and Senior European level throughout 2017 while the likes of Petgrave (-90kg) and Greenidge (+100kg) have displayed some dominant performances in the junior ranks in recent months.

Acelya Toprak (-57kg) won a gold medal in her last outing at the Leibnitz European Cup at the start of June to back up a bronze medal won in St Petersburg in April.

Competition for the juniors starts on both days at 0800 UK time (0900 local). You will be able to find full results here once the competition has been completed

The full squad list for the Saarbruecken European Cup (GER) can be found below:

Social Media Round-up: 10 July – 16 July 2017 Scroll to top
Select the fields to be shown. Others will be hidden. Drag and drop to rearrange the order.
Click outside to hide the compare bar
Compare
Wishlist 0
Open wishlist page Continue shopping