You are here: Home / Events / Fifth for Steele at Cadet Europeans 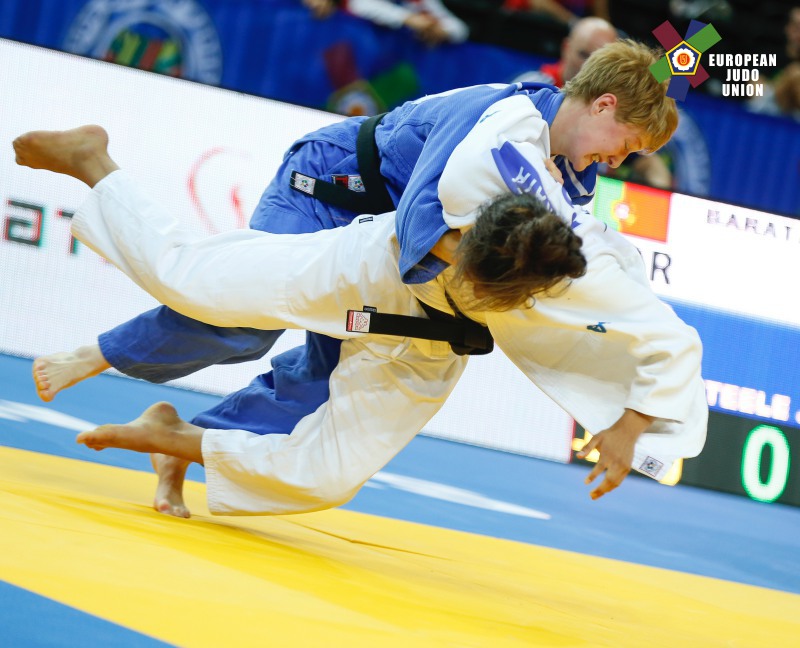 Josie Steele came through a long day’s judo to finish fifth at the 2017 Cadet European Judo Championships on Saturday 1 July.

The Highland Budokan judoka was looking to pick-up GB’s first medal of the competition after Amy Platten and Yasmin Javadian’s fifth places on Friday.

Steele made a strong start at -57kg as she won inside the opening minute against Vineta Alksne (LAT) before coming through a tough contest against Beatriz Barata (POR), winning in golden score by waza-ari.

Steele lost a close quarter-final to Croatia’s Lara Cvjetko with both judoka finding themselves two shidos down going into the final minute. However, Cyjetko took the win as she forced a third shido with the referee going against Steele for passivity.

The British judoka recovered well though to win her two repechage contests against Habibe Afyonlu (TUR) and Caroline Fitze (GER), winning both by ippon.

Her bronze medal contest against Natalia Kropska (POL) was a close match-up with both judoka looking dangerous from the start though the Polish fighter had the better chances early on. However, with just over a minute to go Steele was thrown for waza-ari with Kropska going straight into a strangle, forcing the British judoka to tap out.

No other GB judoka was able to place on the day two of the Championship though Emily Cooper (-63kg), Holly Jones (-63kg), Lachlan Moorhead (-73kg) and Aaron Miller (-81kg) all made winning starts.

Cooper was too strong for Joana Crisostomo (POR) winning by two waza-ari before losing out Daria Kariakina (RUS) by ippon. Jones beat Katarina Kristo (CRO) by two waza-ari in the opening round but was unable to get the better of Anetta Mosr (LUX). The British judoka had a second chance through the repechage but lost to Tatiana Guzun (RUS) by ippon.

Lachlan Moorhead threw Georgios Zafeiridis (GRE) for ippon with a lovely bit of judo but was unable to do the same against Andrei Pirloga (ROU), losing by two waza-ari. Aaron Miller was very dominant in his first contest against Daniel Kuliss (LAT) scoring three waza-ari before finishing by ippon. Eugen Matveiciuc (MOL) was too strong in the second round however, winning on shidos in regular time.

GB will be back in action in the team competition starting from 0800 UK time on Sunday 2 July. Watch live on EJU.net and follow @BritishJudo on Twitter and ippon.org for updates

Two fifths on day one of Cadet European Championships

Dan Grade Promotions – June 2017 Scroll to top
Select the fields to be shown. Others will be hidden. Drag and drop to rearrange the order.
Click outside to hide the compare bar
Compare