You are here: Home / GB Judo / Fifth for Powell and Fletcher in Dusseldorf 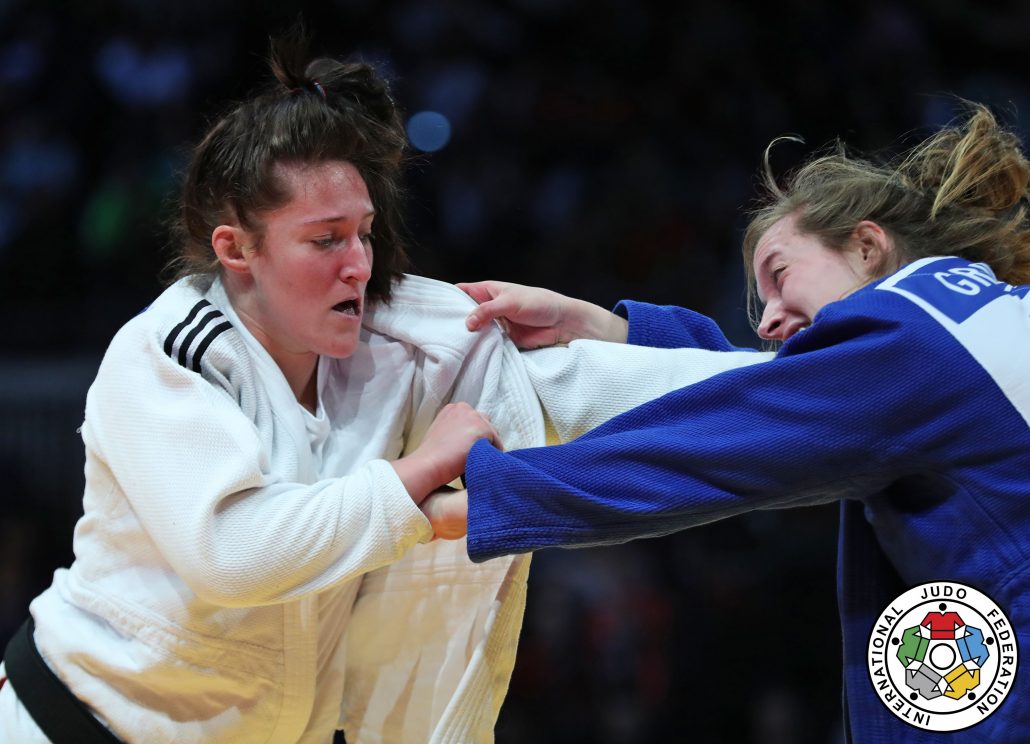 On the third day (Sunday 26 February) of the 2017 Dusseldorf Grand Prix, Natalie Powell and Ben Fletcher both finished just outside the medals with fifth place finishes as the British squad ended the tournament with four fifth places in total.

In Powell’s second tournament of the year the -78kg judoka made a solid start against young Dutch judoka Larisa Groenwold. The 2015 Junior European champion looked active early on but Powell’s superior experience and strength told as she threw her opponent for waza-ari. From there the two-time Masters medallist controlled things to see out the contest.

Tall Ukrainian Anastasiya Turchyn was next up in the quarter-finals but Powell was too good for her opponent throwing for waza-ari before transitioning straight into oasekomi. From there she held Turchyn for 20 seconds to get the ippon score and end the contest.

The semi-final would be a big ask however against current World Champion Maki Umeki (JPN) with Powell on a losing run against the Japanese judoka. The Welsh fighter came out well against Umeki but found herself two shidos down. Going into the last minute Powell went on the attack but was countered by the Umeki and dropped into bronze medal match.

There she faced a second Japanese fighter in Rika Takayama, a two-time Grand Slam medallist including bronze at the Tokyo last year. Takayama’s gripping was impressive and made it difficult for Powell to attack. In the end she was able to roll the British fighter for waza-ari before completing the hold down to take the contest.

Team Bath judoka Ben Fletcher was coming in off the back of a bronze medal at the Rome European Open and was too strong for Aibek Serikbayev (KAZ) leading by waza-ari early on before finishing with big throw for ippon.

Experienced Tunisian Anis Ben Khaled was next up and he forced Fletcher to pick up a shido early on. However, the British fighter got stronger as it went on scoring two waza-ari before strong ground work finished the contest off. German judoka Johannes Frey had beaten Fletcher in Rome the week before but this time in the quarter-finals in Dusseldorf, the British judoka looked the stronger fighter. The contest went into golden score and it didn’t take long for Fletcher to pull off the winning score with a lovely drop attack, much to his delight.

Moving into the semi-finals Aaron Wolf (JPN) was the fighter standing in his way of a first Grand Prix final. It was an epic contest with Wolf looking to score early while Fletcher looked to be getting stronger as it went on. Going into golden score Fletcher was potentially behind on attacks and had to go for it or else risk losing on shido. Despite that it took a fantastic throw from Wolf to win the contest meaning Fletcher dropped into the bronze medal match.

Dutch judoka Michael Korrel had moved into the world top ten off the back of some strong performance in 2016 and the start of 2017 though Fletcher had beaten him in Tblisi last year. Korrel made a fast start with some good attempted attacks with Fletcher doing well to not go behind. However, in attempting to take advantage on the ground Fletcher got caught by Korrel and was held for ippon to finish in fifth.

Max Stewart (-90kg) was also in action off the back of his fifth place in the Paris Grand Slam two weeks ago. The British judoka got off to a good start as he threw David Tekic for ippon. Powerful Serbian Nemanja Majdov was next in the last 16 and it was a very physical encounter with Stewart unable to get into his attacking stride. Going into the final few seconds he went on the attack and was countered for waza-ari and went out of the tournament.

Good medal haul for GB squad at VI German Open Scroll to top
Select the fields to be shown. Others will be hidden. Drag and drop to rearrange the order.
Click outside to hide the compare bar
Compare