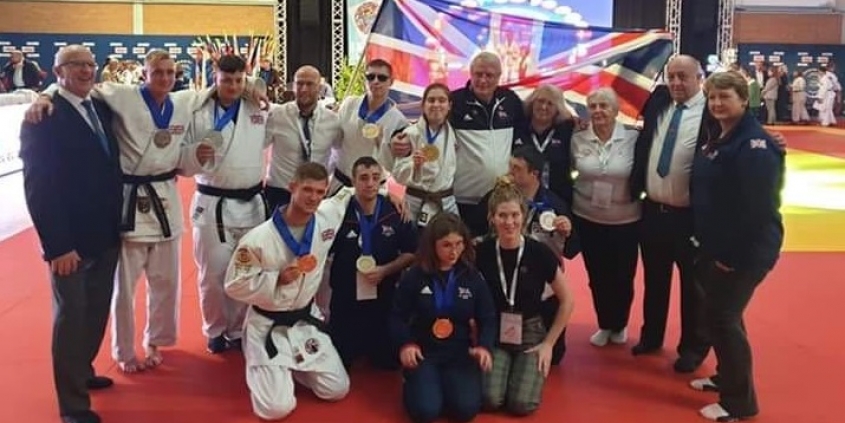 Success was on the cards for the 8 strong British Judo Squad competing at 2nd  Official European Championships ID-Judo in Cologne, Germany between October 16th to 20th 2019.

British success came in the form of Thomas Mawdsley (Under 66kg category) and Chris Murphy (under 81kg category) both scooping impressive gold medals.

A further 3 medals were added to the British tally this time from Shaun Banks, Mikey Lomas and Kyle Jones all taking silver in their respective categories.

British Judo lead, Kerry Tansey said, “Our athletes have shown great professionalism in every aspect, from bonding and creating team ship to supporting each other whilst competing. They are a true credit to British Judo and their home clubs.”

Tracey McCillen, Chief Executive, UK Sports Association said “Congratulations to the Team, it’s a great success story.  The elite pathway for Judo players with intellectual impairment is gathering real momentum and the Cologne Championships is part of that.”

Kate McDermott, British Judo coach said, “It was an event that until you have attended it, until you’ve walked into the arena, felt the atmosphere, the passion and drive you can truly never understand. The event, the competitors, the coaches and all those that made the event possible took my breath away.”

The European ID Judo Championships had representation from 15 nations with 120 participants from across Europe. The British Team was supported by coaches, Kate McDermott and Matt Rush.

The UK Sports Association is the official Great Britain member of Inas, the international federation for athletes with intellectual impairment, Down’s syndrome and autism.  The UK Sports Association and British Judo work collaboratively to support the development of an elite pathway for Judo players with intellectual impairment.

For more information about classification for players with intellectual impairment visit the UK Sports Association website.

Nunn tops the podium as she claims her first European Senior Cup medal at Malaga...

Abu Dhabi Grand Slam Preview Scroll to top
Select the fields to be shown. Others will be hidden. Drag and drop to rearrange the order.
Click outside to hide the compare bar
Compare