You are here: Home / Association news / Early Exits for GB at the Junior European Championships 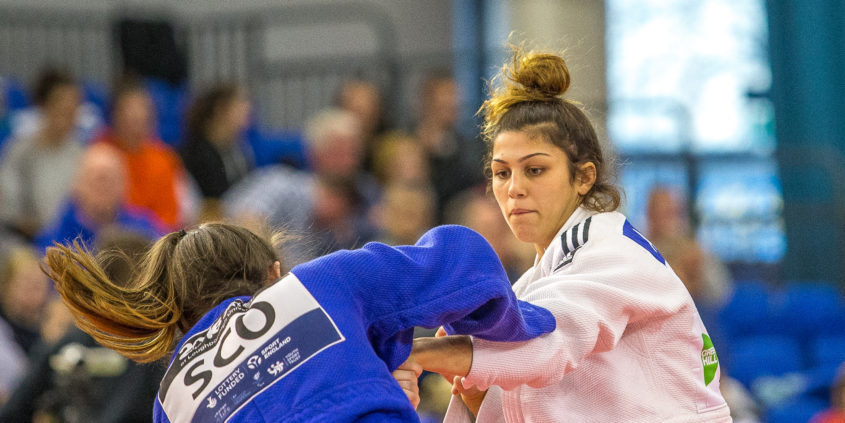 With just two representatives on the mat for GB Judo today at the 2018 Junior European Championships, there were early exits for both Josie Steele and Acelya Toprak on the mat in Sofia.

Josie Steele (-57kg) was making her Junior European Championships debut in Bulgaria and came up against Kosovo’s Flaka Loxha in the second round following a bye in the opening round.

It was a tentative start to the contest from Steele which initially saw her struggle to get to grips with the Kosovo fighter’s tough style. As the contest wore on however Steele begin to get a foothold in the contest and more than held her own whilst picking up shidos on a regular occurrence.

This would eventually come back to haunt Steele as she picked up a third shido deep into Golden Score. The additional period saw both fighters have chances to win the contest and it was difficult to pick a winner for large periods but a false attack from Steele saw her pick up her third and final shido.

Last year’s Junior European Championships Silver medallist Acelya Toprak had harboured hopes to going one better in Sofia and topping the podium for the first time were dashed as she was defeated in the third round.

She looked to be getting the better of Georgia’s Eteri Liparteliani in the -57kg category and can count herself unlucky that she had a waza-ari score wiped off by the table officials halfway through the contest.

This provided Liparteliani with a new lease of energy as she immediately scored a waza-ari of her own as she demonstrated good leg strength to force Toprak over onto a shoulder.

This prompted Toprak to go on the immediate attack and the Georgian athlete was able to counter her attack to score a second waza-ari and with it, secure the victory and succumb Toprak to an early exit.

She had earlier defeated Austria’s Olivia Taroncher in a tight contest that progressed all the way to Golden Score. Just 30 seconds into the additional period Toprak found the score required as she hooked Taroncher’s ankles and was able to force her onto the mat.

Tomorrow sees three more athletes taking in the mat in the form of Harry Lovell-Hewitt (-90kg), Wesley Greenidge (+100kg) and Shelley Ludford (-78kg) as they look to secure GB Judo’s first medal of the competition. Competition is due to begin at 8:30am UK time.

Shelley Ludford Finishes 7th at Junior European Championships Scroll to top
Select the fields to be shown. Others will be hidden. Drag and drop to rearrange the order.
Click outside to hide the compare bar
Compare