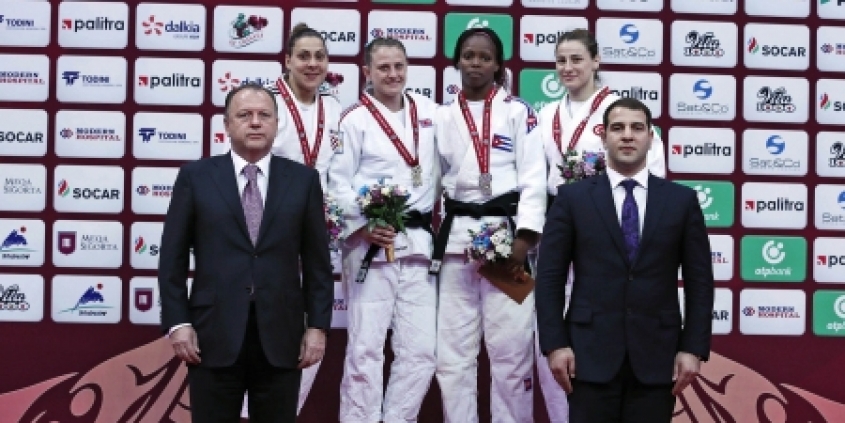 Alice Schlesinger was in imperious form as she took home gold at the Baku Grand Slam on Saturday 7 May and in doing so also picked up 500 qualifying points for the 2016 Rio Olympic Games this summer. The -63kg judoka had won bronze last year and was aiming to be the third British gold medallist at this Grand Slam in as many years.

Schlesinger got off to a good start as she proved too strong for Hannah Martin (USA) forcing her to pick up four shidos. In her next contest with Kiyomi Watanabe (PHI) the British judoka threw her opponent for waza-ari twice in quick succession to book a spot in the quarter-finals.

There she came up against Turkey’s Busra Katipoglu who had just beaten Anicka Van Emden (NED). Again however Schlesinger would prove too good for her opponent as she threw the Turkish judoka for ippon with just 20 seconds on the clock.

In the semi-final Schlesinger was faced once again by Israel’s Yarden Gerbi. The last time they’d fought at the Dusseldorf Grand Prix earlier this year, Schlesinger had forced Gerbi to tap out via juji-gatame in a tense encounter. However this time the British judoka took the win inside the first minute with another nice bit of judo to throw her opponent and book her place in the final.

Schlesinger had last won a Grand Slam title in 2012 and she would not be denied today as she produced a lovely uchi-mata to throw Marijana Miskovic Hasanbegovic (CRO) 27 seconds into the final.

Speaking afterwards Schlesinger said: “I am really pleased with how I fought and focused today. I was very disappointed at the Europeans, so it feels nice to be on the rostrum again.”

Elite Performance Coach Kate Howey, MBE, said: “I am pleased with how Alice performed today. After a disappointing Europeans she came back in style. She won all fights by ippon including against the world number five Yarden Gerbi. This should put her in a seeding place for the Olympics.”

Nekoda Davis (-57kg) and Ashley McKenzie (-60kg) both medalled on the opening day of the Baku Grand Slam taking silver and bronze respectively.

The final day of the Baku Grand Slam will see Gemma Gibbons (-78kg), Natalie Powell (-78kg) and Ben Fletcher (-100kg) going for gold with the action starting from 0700 GMT live on ippon.tv with live updates on @BritishJudo on Twitter.

Final day fifth for Gibbons in Baku Scroll to top
Select the fields to be shown. Others will be hidden. Drag and drop to rearrange the order.
Click outside to hide the compare bar
Compare