You are here: Home / Events / Zagreb bronze for Ashley McKenzie 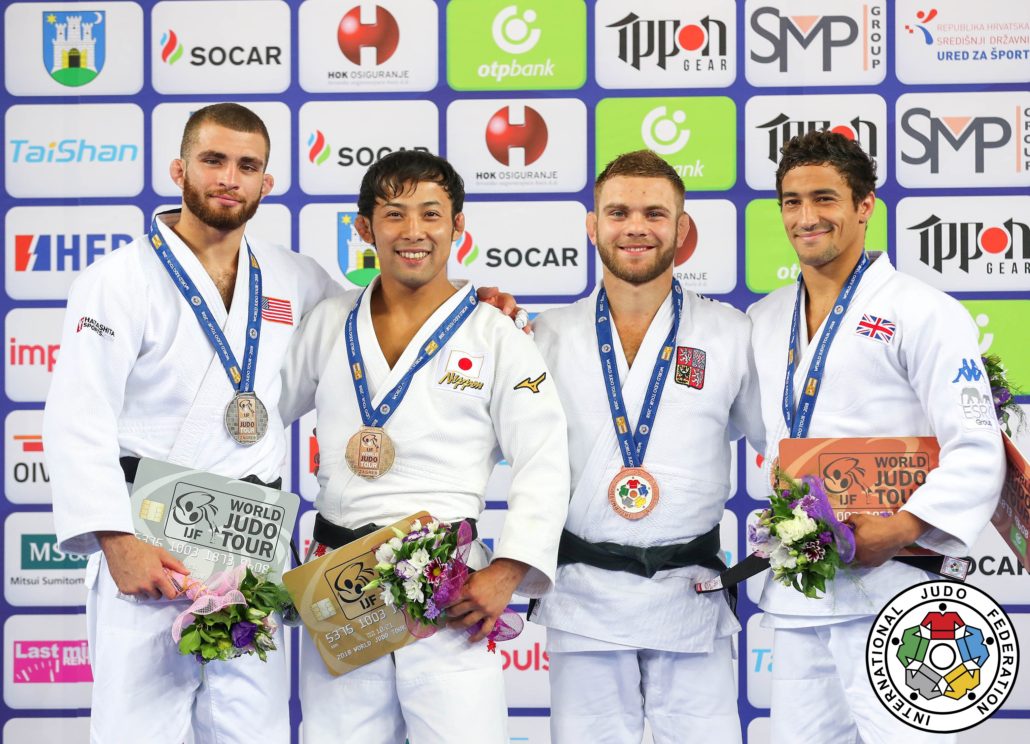 This was the British judoka’s third medal in 2018 following bronze at the European Championships and Paris Grand Slam. This was also McKenzie fifth Grand Prix medal of his career.

McKenzie went into the Grand Prix as second seed and he backed up that ranking with a routine win over Yann Siccardi (MON) in the second round.

McKenzie threw Siccardi for waza-ari to take the lead before a lightning quick Tai Otoshi saw him finish the contest with just over a minute gone.

His third round contest against Dutch judoka Tornike Tsjakadoea was a more tactical affair with McKenzie winning in golden score on shidos.

David Pulkrabek (CZE) was next up in the quarter-finals and in a fairly even contest the Czech fighter took the lead as he countered and rolled McKenzie for waza-ari.

The British fighter continued to pressure his opponent but Pulkabrek pulled out another strong attack and finished the contest in the final minute with a second waza-ari score.

The Camberley judoka didn’t let that disappoint hang too heavy though as he made short work of his repechage final contest, beating Artem Lesyuk (UKR) in less than a minute with two outstanding drop attacks.

Italy’s Andrea Carlino stood in his way for bronze and the younger judoka made things difficult for McKenzie early on as he looked to drag the British fighter onto him and nullify his attacks.

McKenzie bided his time though and after controlling the Italian’s right sleeve he threw Carlino for waza-ari before backing that up in the next exchange with another waza-ari score to secure the bronze medal.

There was also a seventh place for Chelsie Giles at -52kg. The Coventry judoka won her maiden Grand Prix medal earlier this year in Antalya and she made the best possible start she beat Portugal’s Mariana Esteves by waza-ari awasete ippon.

WRL 11 Angelica Delgado (USA) was next up in the quarter-finals and in a very tactical contest the American judoka proved to be a tricky customer.

The contest went into golden score with Giles having picked up two shidos to one for the American. In the opening exchange of golden score the British judoka was countered well by Delgado as she went in for a sasae.

Giles moved into the repechage final against Anja Stangar (SLO) where the Slovenian took the lead after holding down the British judoka for waza-ari.

Giles came back hard at Stangar and almost score with the very last exchange but the Slovenian did enough to hold her off.

Kelly Staddon (-48kg) reached the round of 16 as she beat WRL 20 Catarina Costa (POR) on shidos. The British judoka had lost to Costa twice this year but showed good tactical awareness to force the Portuguese judoka into picking up three shidos.

She took on Rio Olympic silver medallist Otgontsetseg Galbadrakh (KAZ) in the next round and after a fairly even start the Kazakh judoka started to control.

The pressure eventually told with Staddon picking up three shidos to exit in the round of 16.

Tomorrow (Saturday 28 July) is another busy one for GB Judo with six fighters on the mat:

Competition starts at 0900 UK time with live coverage via live.ijf.org. Follow @BritishJudo on Twitter for updates throughout the day

Conway wins Zagreb Grand Prix bronze Scroll to top
Select the fields to be shown. Others will be hidden. Drag and drop to rearrange the order.
Click outside to hide the compare bar
Compare