You are here: Home / Association news / Working with England Rugby 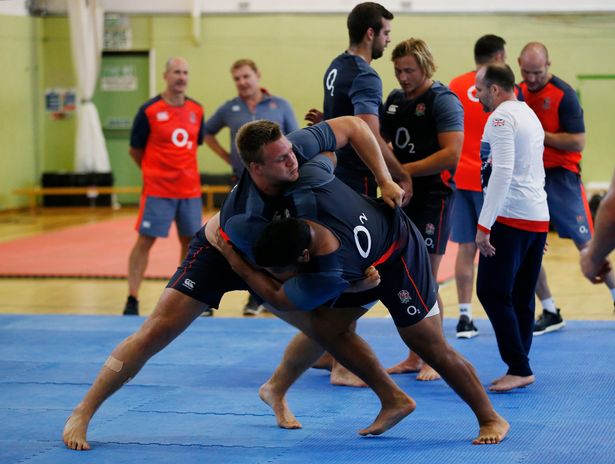 In a bid to improve England’s performances in the lead up to the Japan World Cup in 2019, England Head Coach Eddie Jones and Assistant Coaches Steve Borthwick, Neal Hatley and Paul Gustard spent time at the British Judo Centre of Excellence with members of the Performance team.

The England coaching staff had identified defensive issues during their recent tour to Australia and wanted to see how they could utilise judo techniques and learning to improve their defence ahead of the Autumn Internationals starting on November 12 with the visit of South Africa.

Paul Gustard: “There’s obvious transference I guess around grappling with mauls and tackle and restart collection and so on and also that low body position you adopt in breakdowns. Judo players are very flexible, they’re agile, they’ve got good mobility and some of the activities that they do are very practical in terms of a rugby sense.

Off the back of those visits Kate Howey and Jean-Paul Bell were invited down to England’s training camp down in Brighton on Monday 3 and Tuesday 4 October and their Portugal training camp from November 2 to November 4.

Speaking after the first sessions in Brighton, England Forwards coach Steve Borthwick said: “I think within that 20-30 minutes we did today I thought I saw some players really changing, really picking up some things. I was really intrigued watching them when they left. They were then talking about it and they were chatting about it and trying to look at their hand positions which shows me they’re really keen.”

Bell, speaking ahead of the Six Nations, felt it was a positive experience and valuable opportunity for the sharing and exchanging of knowledge between sports:

“It was really good to be invited down by Eddie and the rest of the team to help them ahead of the November internationals last year. England had obviously a great year by then but were always looking to improve and they felt that judo could give them a bit of an edge in defence.

“So for us over both camps it was about helping them to develop their movement patterns in those tackle, ruck and maul situations so that they could be as effective as possible in defence.

“It’s always interesting to see how other elite sports work and getting the opportunity to share knowledge and learning with other coaches was invaluable. I’m looking forward to seeing how the team does over the next few years as they build up to Japan in 2019.”

EYOF judoka Will Jones to captain Wales Under-20s Scroll to top
Select the fields to be shown. Others will be hidden. Drag and drop to rearrange the order.
Click outside to hide the compare bar
Compare