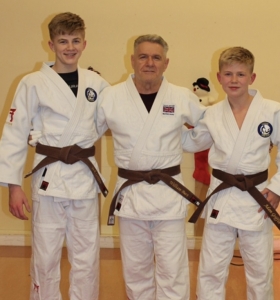 For many people, when they reach the age of 59 they may be thinking about relaxing and looking forward to retirement. However, for Scotland’s William Burt, he decided to start a new sport and study judo.

‘I have been studying judo now for five years, I started judo in May 2014 firstly to get myself back to a reasonable level of fitness and to lose weight.’

‘Previously I had always been in fairly good shape and had a good level of fitness up until my early fifties, but after taking early retirement at 52 I turned into a couch potato! As a teenager I started karate, up to brown belt level, but after breaking my wrist I took up long distance running before then moving onto weight training and five-a-side football. However, seven years of inactivity took its toll.’

‘In my opinion Judo, compared to these other exercises, attracted me because of the concept of using your opponent’s weight against them, the friendliness of the judoka in the class and their willingness to help and pass on knowledge to me.’

‘Four of my grandchildren study judo and I attended most competitions to watch them, so I therefore decided to take up the sport, and that is where my judo journey began.’ 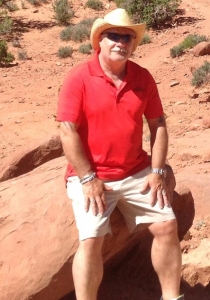 ‘I can still remember the head coach at Tayside Judo, Andy McInroy’s face when I turned up at the club and said I wanted to start judo at the age 59. He looked at me (5’4″ and 99.5kg) and said “REALLY?”

‘I started under a first-rate coach Scott Malone and the ever-watchful eye of Andy ‘Mac’, as we call him! I’m not going to pretend that starting judo at 59 was easy, in fact it was very challenging, but after great coaching, and Andy advising me to sit out when I needed to, my judo and fitness progressed to twice weekly sessions. One session was at Perth High School, where I was introduced to two brilliant young coaches, David Scobbie and British Judo’s Aiden Moffat, who now take the Dundee classes as well. Taking the two classes improved my training, judo, fitness and general health no end, and by 2016 I had passed my brown belt grading and was ready to compete.’

‘I started my judo journey at 99.5kg and was now going into my first competition, the 2016 British Masters Championships, to compete at M7 -73kg. I won gold!’

‘On the morning of 7th February 2017, I did not feel well at all and knew there was something wrong. It turns out an artery had ruptured near my heart and a blood clot from it had passed through my heart and caused it to arrest – I had a heart attack! After I was stabilised in coronary care I asked the cardiac consultant if it was my fault, and if doing so much training at my age had caused the rupture. He said ”no, not at all, whatever you’re doing keep doing it, your fitness has in fact saved you.” Judo helped save my life!’

‘After my heart attack in 2017 I just wanted to make it to the mat in Cardiff for the British Masters. I had the privilege to fight the very formidable Chris Doherty in the final and I managed to overcome my 2016 opponent, Irish Masters champion Manus O’Donnell, en route to winning silver. In 2018, at the British Masters in Thetford, I remember waiting to go on the mat and numerous players wishing me good luck. It was only after the fight I realised my opponent, Steve Ashford, had won the British title ten times and was also a Commonwealth gold medallist! To have shared a mat and fight with these men was an honour and privilege.’ 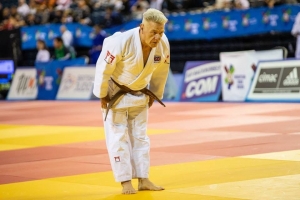 ‘At the European Veteran Championships, at the Emirates Stadium in Glasgow, I fought a two time World Champion Veteran Sambo player, unfortunately I did not win a medal, but what an experience!’

It has been quite a journey for William, but what does the future hold?

‘I have decided no major competitions for me this year as I am currently training towards a Veteran grading in September. I set myself the goal of achieving my Dan grade before or during 2020, as I will be 65. I have passed the theory, so I’m already halfway there with 50 points, so I’m hoping I can fulfil my ambition by then!

‘In my opinion taking up judo at any age is an excellent way for getting fit and healthy. It is one of the best things I have ever done, and I love it. You will meet new friends that are tough, loyal and dedicated. To become a part of the judo family is an honour and you can improve your fitness both physically and mentally. Sometimes at training I am truly inspired by the likes of Gordon Swan, a 3rd Dan in his mid-50’s recovering from a double hip replacement, and a 3rd Dan female player who is in her 70’s – we call her Sensei Maz and she trains two times per week. They both inspire and give me motivation.

Team Announcement: Team GB announces selected athletes for the Baku 2019 European... Scroll to top
Select the fields to be shown. Others will be hidden. Drag and drop to rearrange the order.
Click outside to hide the compare bar
Compare