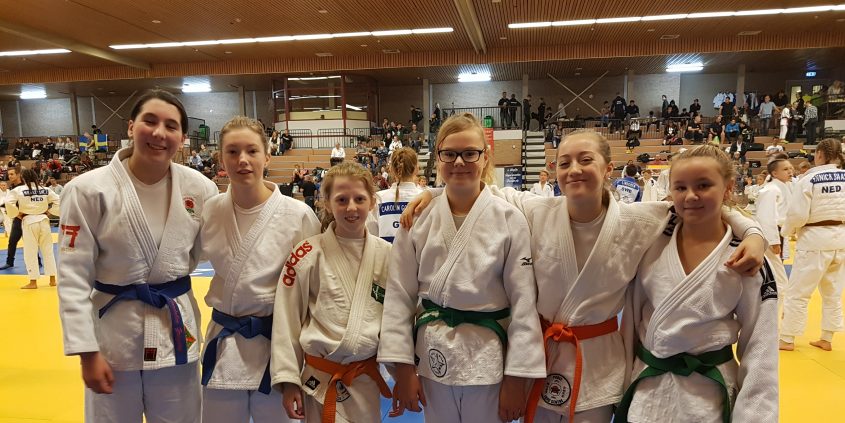 Western Area judoka for a second time travelled over to Holland to compete in two exciting tournaments in Emmen and Alkmaar.

Our team of 20 judoka representing clubs Devizes, Bradley Stoke, Poole, Kingsley School, Yate, South Brent and Team Bath left early on Friday morning. We covered just over 600 miles to Emmen for the Saturday Competition, before driving two hours back across Holland to Alkmaar for the second event on Sunday.

The ODJK was the first event in Emmen, which attracted 700 judoka fighting across a 10 mat arena. With 11 Nations represented, the standard of judo was very high with both the Belgian and Dutch National teams competing together with many other elite level and European Cup judoka.

Our team all fought incredibly well, particularly the judoka who were competing in Europe for the very first time. James Smith competed in the U15, -38kg. James lost his opening bout to a German before battling back strongly to win his next three fights including a tense bronze medal bout against Luuk Rattink which went into golden score in the bronze final. Isabel McKay was also fighting really well in the U15 -52kg and after an excellent run of form she unfortunately lost in her bronze medal bout to Joyce De Vries.

Teigan Howell who was in the same category -52kg, was making her European debut. She won her first contest in the group before being eliminated in the later rounds. Charis Oram competed hard in each of her contests, but failed to reach a final position in the +63kg category. Max Gregory U18 -90kg was improving in every bout and eventually earned himself a well-deserved bronze medal.

His sister Cordelia went one better by winning a silver medal in the U15 -70kg division. She competed wonderfully throughout her group to reach the final against Dilara Sahin from Judo team Bijsterbosch, and this was a tense hard fought bout which went the way of the Dutch girl, leaving Cordelia with the silver medal. In even better form was Pierre Michelin who won the team’s only gold medal on Saturday when he defeated Jonathan Lingmerth from JK National club in the final of the  Boy’s U15 Combined -81kg group.

Josh Shipp earned the team’s fifth medal of the day winning a bronze medal in the Boy’s U18 -50kg category. Just missing out in the bronze fights unfortunately was Cerys Callard, Amie McMurray, while in 7th Place were Mark Wild, Kieran McCann and Kolya Schwinge. On reflections of the judo on display in Emmen, our team competed very well gaining so much experience and confidence during the first day of competition and hopefully helped them to move forward to day two.

We packed up after the day’s competition and set off on our two hour drive to the new base down near Alkmmar ready for the second tournament of the weekend.

That evening once we had settled into our Stayokay hostel and enjoyed many pizzas, the team had a little time to reflect on the day’s events and socialise before getting some well-earned sleep.

Day two started early once again as we set off to the Sport Complex Hoornse Vaart in Alkmaar just before 8am. These championships attracted just over 600 judoka from 10 European nations and fought across an impressive eight mat arena.

After the normal switching and making sure individual weight categories had carried over from Saturday’s event, we got started just after 9am. Unfortunately the day started poorly with Robyn Ward being thrown heavily on her head and after some treatment it was decided the best option was going to be a proper hospital check-up.

Fortunately as the day progressed we got news that Robyn was in good health and she later returned to watch the rest of the event and support the team. Back on the mat however it was clear the day was going to be another challenging event for our team, as the level of the athletes was once again very tough.

Cordelia Gregory once more produced another outstanding performance in her category +57kg. She battled her way winning all her fights in a round robin style pool and eventually defeated her closest rival to claim the gold medal, by beating Ugne Pileckaite from Onbekend JC in the final bout in the pool. Charis Oram was also in this group and even though the level was much higher, she gave an impressive display and improved in each contest.

It was a very hard morning session for the rest of the team however, Amie McMurray fought hard to finish in 7th place. James Smith and Zach McMurray equally impressed finishing in 7th and 9th. Then it was the turn of Ceri Milward and Cerys Callard, who had been told in the morning she couldn’t compete as there were no other participants in her weight. Suddenly Cerys was called to fight and with just two minutes notice was changed and on the mat fighting in a newly created group with a combined age and weight category.

Cerys fought incredibly winning two of her four bouts, while Ceri Millward also won the same number of contests however with only 1one bronze medal on offer Ceri was awarded the bronze on points over Cerys. Both girls had fought astonishingly well and deserve huge credit for their efforts.

The afternoon session was where all the excitement happened from winning medals to forcing the team back on the mat to fight again as all the English teams where rapidly running out of time to catch the Euro Tunnel home. Some of the team knew that they might not even get onto the mat to fight. However with the help and amazing support from the Alkmaar organising team in the end we did manage to get everyone fighting and winning despite the lack of time left and our coach drivers reminding us we need to leave on more than one occasion.

On the mat though Josh Shipp reached the final of the -50kg in impressive style, the final didn’t quite go his way. Regardless of the result Josh has produced some quality judo all weekend, adding a silver in Alkmaar after losing to Dries Boulidam from Bos Judo to his bronze medal from Emmen.

Adam Vosper was always going to be ready to stop and leave and any moment, but as the time was slipping away with some fast changes in the contest orders he was suddenly in the final of the -55kg against Henry Stables from FIJ Judo. The fight was very tense and evenly balanced to the end but it wasn’t to be for Adam who had to settle for the silver followed by a run straight onto the coach still in his kit and grabbing the medal on the way.

It was a very similar story for Max Gregory with little rest in-between contests he kept going and eventually won himself the bronze medal in the +81kg category. Mark Wild -60kg produced some of the best throws all weekend, winning five by ippon as he earned a bronze medal after defeating Mats Sommervold from Norway in the final contest.

Tom Smith made an impressive debut in the -60 kg class finishing in 7th place. Cameron Lavelle and Koyla Schwinge both fought hard in the -73kg division and Pierre Michelin unfortunately withdrew after a leg injury. Kieran McCann, Teigan Howell, Isabel McKay and Ben Pearce all produced some good judo displaying plenty of potential for the future at this level in Europe.

As the team finally left the venue just after 5pm we all raced down the motorway only to face a closure on the motorway which left us trying to navigate our long detour in the Dutch countryside. Eventually we arrived at Calais at 10:10pm and missed our Eurotunnel train which was supposed to be 10:20. Happily our drivers managed to sweet talk the operator and we got onto the already fully booked next train at 1:48am. This however wasn’t the case for Pinewood team who we had shared most of the weekend with and they had to wait until 7:20am.

Even though the weekend involved lots of travel and heaps of running around and chasing judoka and officials, the experience and team building from within our group was invaluable. Watching the team support each other and develop and gain many life experiences makes these trip so valuable to our judoka’s long term development and continued success for the Western Area Squad.

So a massive thank you was well earned to each team member and their parents for sending you with the team. Behind the scenes, Lisa Oram and Martin Wild who worked on the travel and accommodation. Our parent supporter Andy McMurray who ran the whole weekend’s commentary live on Facebook with photos and results. Our coaching team alongside Simon Ward was Eva Minarikova and Gary Gregory.

Finally to both the Emmen and Alkmaar Judo clubs who looked after our teams and ran two extremely well organised tournaments for our athletes, but an extra special thank you to Walter Snijders at Alkmaar who really went the extra mile without a doubt to help us with a last minute transport problem and then helping to take Eva and Robyn to the hospital as well as staying with them to help out even more.

So once again thanks to you all and hopefully we can return again in 2018. 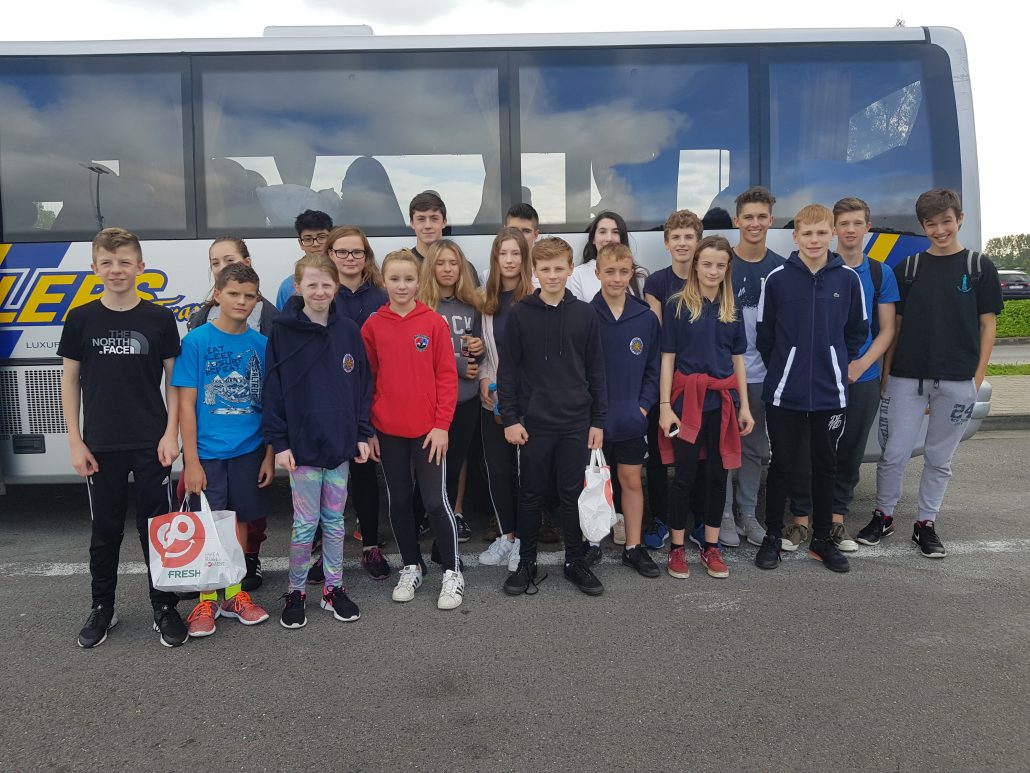 First round exit for Greenidge at Junior Worlds

Performance Director Blog: Consistent success by our Juniors Scroll to top
Select the fields to be shown. Others will be hidden. Drag and drop to rearrange the order.
Click outside to hide the compare bar
Compare