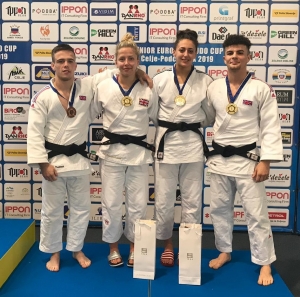 Ham (-73kg), from Glossop, improved upon his 5th place finish 12 months previous, to claim his first senior medal and win gold, to add to the gold he won at the Junior European Cup in Coimbra in 2015.

Basingstoke’s World Junior Championship bronze medallist, Ludford (-78kg), who is making the transition from the junior ranks to senior, won her first senior gold to add to silver she won at the European Open in Glasgow last year.

Petersen-Pollard (-70kg) of Sutton Coldfield, who is still a member of the GB Judo junior squad, won her first senior medal in taking gold, to add to the silver medals she has won at the Junior European Cups in Coimbra and Lignano earlier this year.

Scotland’s Thomson (-60kg), who is also making the step up from the junior ranks this year, claimed his first senior medal in taking bronze.

England Talent Development Coaching Appointments Scroll to top
Select the fields to be shown. Others will be hidden. Drag and drop to rearrange the order.
Click outside to hide the compare bar
Compare