You are here: Home / Events / U23 European Bronze for Kelly Staddon 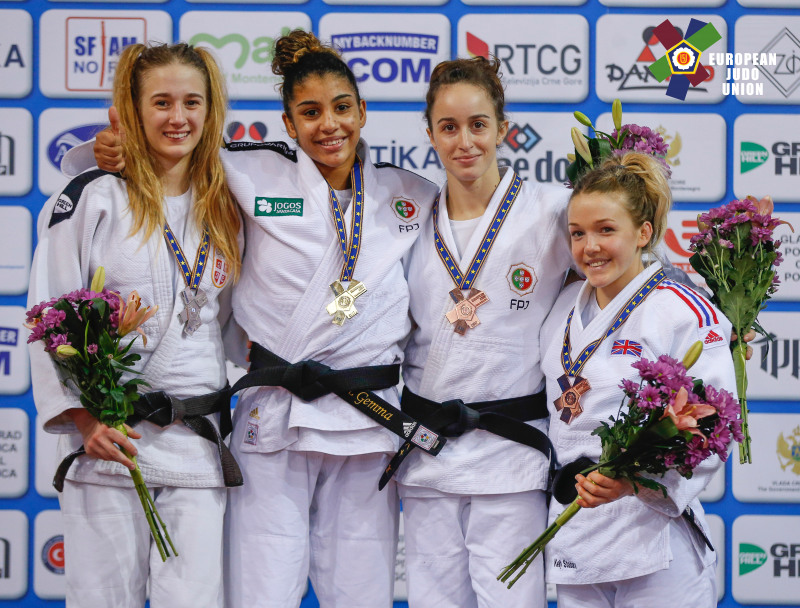 Kelly Staddon capped off a strong day’s judo with -48kg bronze at the 2017 U23 European Championships in Podgorica, Montenegro on Friday 10 November.

The Romford judoka has had a good second half to 2017 with a gold at the Saarbruecken Senior European Cup and silver at the Belgrade European Open.

Staddon started her day against Italy’s Elisa Adrasti with the British judoka dominating the exchanges from the start. With just over two minutes gone Staddon threw Adrasti which was given waza-ari before being upgraded to ippon.

Junior European Championship bronze medallist Gultaj Mammadaliyeva (AZE) was next up in the quarter-final. The powerful Azebaijani went on the attack in the first exchange with Staddon countering well to score waza-ari.

After that the Ford Judo Club judoka showed her contest management to hold off Mammadaliyeva and book a place in the semi-finals.

Top seed Maria Siderot (POR) had come through a couple of tough contests but she showed her class to throw Staddon for ippon with little over a minute on the clock.

The British fighter had already improved on her seventh place at last year’s U23 Europeans but she looked determined from the start to secure a podium finish.

Staddon’s gripping put Madalina Stoica (ROU) under pressure from the start as she forced the Romanian to get two shidos inside the first minute for defensive posture and stepping out.

Staddon would pick up a shido for a gripping infringement but she didn’t let that faze her as Stoica dropped under pressure to pick up a third and final shido.

“This year my focus has been on getting my competition and training load high. I struggled with injuries in 2016 and this didn’t help with nerves or my confidence coming into the bigger events.

“I have more confidence in my judo lately, so leading up to this event I was excited to show my improvements. Mentally I’ve noticed a really positive change, so I am very happy with that.

“This year I have performed against some of the top girls, and got some of my best results, so to end the year with my first championship medal is a great stepping stone for me.

“Matt (Purssey GB Elite Performance Coach) was great with me today. He made sure I kept focused on my performance and to take each exchange at a time, instead of thinking of the end result, so I am super happy to win the medal for us both.

“I had a clear gripping pattern for my bronze fight and, although I would of preferred to have finished with a throw, I am happy that I showed patience and let the plan work out. Now I just need to learn from my semi-final mistake and get ready for the Hague Grand Prix next weekend!”

GB EPC Matt Purssey was delighted with Kelly’s result and the progression she’s shown this year:

“I am delighted for Kelly! There’s is nothing better, as a coach, than when someone who truly deserves success achieves it.

“Kelly is one of the most sincere, genuine & caring people I know & have the pleasure to work with. She is also one of the most professional, on & off the mat, & never misses an opportunity to challenge herself – this is how she keeps learning & progressing.

“Kelly has grown in confidence & belief this year & is starting to show in competition what she is capable of.

Competition will start at 1000 UK time with live stream via britishjudo.org.uk and updates via @BritishJudo on Twitter

Dan Powell Wins Bronze At U23 Europeans Scroll to top
Select the fields to be shown. Others will be hidden. Drag and drop to rearrange the order.
Click outside to hide the compare bar
Compare