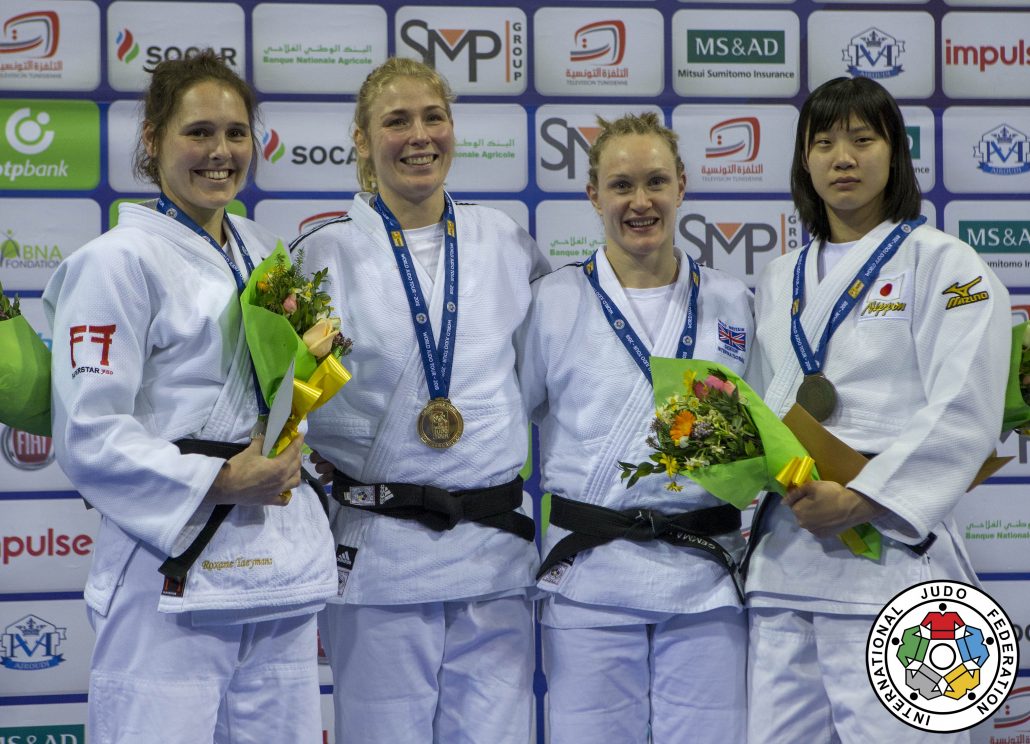 Gemma Howell won the first international medal of 2018 for GB Judo with bronze at the 2018 Tunis Grand Prix on Saturday 20 January.

This was the Wolverhampton judoka’s third Grand Prix medal at -70kg having moved up to that weight at the start of 2017. The 350 world ranking points should also see Howell overtake Sally Conway in the world rankings.

Howell was in fine form from the start as she made short work of Tatiana Kovalenko (RUS), winning her opening contest inside the first minute. The British judoka threw Kovalenko for waza-ari in the opening exchange and followed that up in the next exchange as she threw her for ippon.

Japan’s Saki Niizoe was next up in the quarters and the Howell went behind early on by waza-ari. Despite her best effort she was not able to get a score back and dropped into the repechage.

There she faced Nurcan Yilmaz (TUR) and the Turkish judoka proved to be a tricky customer. Eventually thought Howell spotted an opportunity in newaza and executed a superb turnover to secure the hold down.

This booked Howell’s place in the bronze medal match where she took on Austria’s Michaela Polleres.

Howell controlled proceedings from the start as she dominated the gripping exchanges and put in a number of strong attacks. Polleres conceded an early shido for passivity as a result.

Despite being on the back foot, Polleres was still dangerous and did enough to keep Howell honest. Eventually with 45 seconds left on the clock Howell took the lead as she threw Polleres for waza-ari.

The British judoka was able to win down the clock with Polleres pressing hard, with the Austrian coming close to scoring in the dying seconds.

“Gemma fought well today showing she can throw, her gripping was good and her newaza is top drawer. Her contest management was a lot better which she has been working on. She did well to get another Grand Prix medal which can only give her confidence going into her next competition at the Dusseldorf Grand Slam next month.”

There were also a top eight placings for Lucy Renshall and Amy Livesey at -63kg as they finished fifth and seventh respectively.

Renshall got the better of the experienced Isabel Puche (ESP) in her first contest as she threw the Spanish judoka for ippon.

Her quarter-final with Andreja Leski (SLO) was a lung-bursting encounter which went into golden score. After over four minutes of golden score it was the British judoka who came out on top, throwing Leski for ippon.

It was another golden score contest in the semi-final against Tina Trstenjak (SLO) with Renshall giving the Olympic champion a good fight. Eventually the Slovenian took the win with a close waza-ari score going in her favour.

Austria’s Magdalena Krssakova had beaten Renshall’s teammate Livesey in the repechage final and she continued that winning run as a late waza-ari score proved the difference in a tactical contest.

Livesey faced Denmark’s Laerke Olsen after receiving a bye into the second round. After taking the lead by waza-ari, the British judoka finished the contest in newaza and she forced Olsen to tap from a strangle.

In the quarter-final Katharina Haecker (AUS) took an waza-ari lead and held despite Livesey’s best efforts. This dropped the British judoka into the repechage where she took on Krssakova (AUT).

Livesey appeared to have won it in final seconds with a waza-ari. The score was taken off by the table officials and Krssakova took the win in the golden score as she threw Livesey for ippon.

Jemima Yeats-Brown made her return to international competition in Tunis. The Ryecroft judoka had last fought internationally in 2016 due to an ACL injury last year.

She saw off the challenge of France’s Marina Olarte in her opening contest as she threw her for waza-ari before finishing the contest in newaza via strangle.

Belgium’s Roxane Taeymans would get the better of Yeats-Brown in the second round with a single waza-ari proving the difference. The Belgian would go on to finish the day with a silver medal.

At -73kg Dan Powell made his Grand Prix debut and started things off with a solid win over Belhassen Louati (TUN) as he held him down for ippon.

Powell would lose out to Akil Gjakova (KOS) in the next round with the Kosovan winning with a mix of strong tachiwaza and newaza.

Eric Ham (-73kg) and Owen Livesey (-81kg) both went out in the first round to Georgii Shmakov (RUS) and Ivan Petr (CZE) respectively.

Ham’s contest went to golden score with Shmakov winning on shidos. Livesey went ahead in the opening minute of his contest before Petr levelled things up with just under a minute left.

The Czech judoka finished the contest just three seconds to go with a second waza-ari giving him the win.

Sunday will be the turn of the heavyweight judoka with Frazer Chamberlain (-90kg), Jamal Petgrave (-90kg) and Philip Awiti-Alcaraz (-100kg) taking to the mat.

Competition starts at 0900 UK time with live coverage via live.ijf.org and britishjudo.org.uk. Find the full draw on ippon.org and follow @BritishJudo on Twitter for live updates.

Fifth at the Tunis Grand Prix for Frazer Chamberlain Scroll to top
Select the fields to be shown. Others will be hidden. Drag and drop to rearrange the order.
Click outside to hide the compare bar
Compare
Wishlist 0
Open wishlist page Continue shopping