You are here: Home / Featured / The Physical and Mental Benefits of Judo for Children 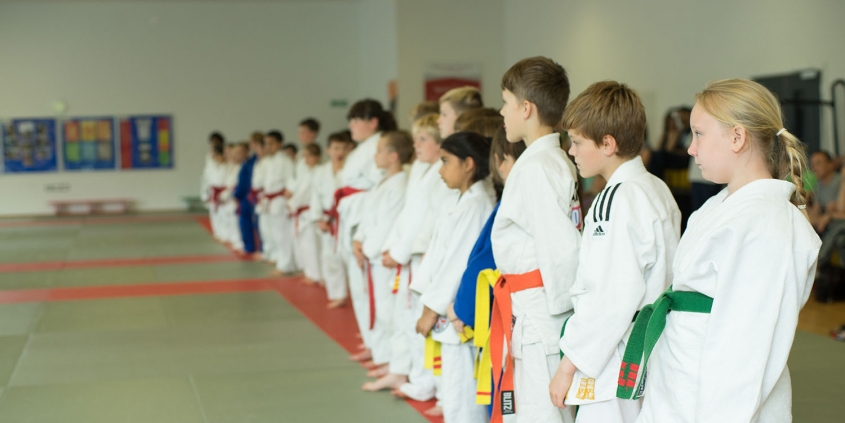 Judo was founded in 1882 by D. Jigoro Kano and means the “gentle way.” It teaches people of all ages the importance of flexibility when applying technique. In judo, when performing a throw or other skill, emphasis is placed on flexibility and efficiently using your leverage and balance for every movement. To be successful in judo, it’s much more important to learn technique, timing, and skill, instead of simply using brute strength to win.

Judo classes start with ukemi, which literally means “receiving body,” and teaches students how to properly react to an attack and shows the necessary skills to respond to an attack safely. This means that everyone must learn how to fall before learning anything else. If you can’t learn how to fall the right way, you will get hurt practicing judo. The reality of judo is that you will get thrown really often, which is why you need to learn to break falls.

There are two main methods of ukemi in judo, either when your arm hits the mat first, or when you’re falling and you roll your body forward in a motion of somersaulting. The most important thing to learn as a student is to not put your hands out when you fall because that’s how you get injured. Judo teachers explain that before any judo training begins properly, students have to become comfortable with falling and get rid of the instinct to put your hands out, the cause of the large majority of injuries.

The Benefits of Judo

Judo has so many health benefits, both mental and physical, especially in children. According to Frederic H. Thanes, a judo instructor at Last Minute Writing and Writinity, “not only does judo focus on building physical fitness, but it also improves children’s focus, develops positive attitudes about sports in general, and increases self-esteem, self-discipline, self-respect, and courtesy toward others.”

Judo is an excellent activity for young kids because it builds healthy and strong muscles early on, improves their cardio, and lowers their cholesterol. Children who participate in judo have a reduced risk of childhood obesity, heart disease, and osteoporosis, even as they leave childhood and become adults. It also sets the foundation for them to become healthy and active adults who appreciate the importance of physical activity.

As a martial art, judo focuses on building self-respect, respect towards others, including opponents, and respect towards your teacher. In tun, this nurtures their trust, confidence, and judgment so they can grow as balanced and emotionally healthy young adults.

Judo is about giving children an outlet for their boundless energy while also discouraging violent behavior, like many martial arts. Students of judo have compared discipline in judo to discipline in the military because it teaches you to respect those around you, pay attention to detail, and learn how to present yourself.

Kyle Powers, a judo master at Draft Beyond and Research Papers UK, explains to his readers that “it’s rare for children who practice judo to get involved in bullying or schoolyard fights. Because it’s a sport that builds discipline and respect of others, students known that engaging in aggressive behavior is not the proper solution and their judo techniques are for their classes.”

Children’s concentration has increased exponentially after they start practicing judo because they get used to following very detailed and specific instructions from their teachers, paired with focusing deeply on their techniques of movements. Studies have shown that children who are hyperactive or who suffer from attention deficit disorders benefit immensely from the disciplined environment of judo.

Kids who have attention problems will take judo classes and the difference in their focus is night and day. They feel like they really want to learn and they’re really engaged, which pushes them to focus more. That can even be seen as therapeutic and helpful as they grow older and need to concentrate at school or work.

Judo, like many other martial arts, combines physical activity, self-defence skills, and discipline. Judo is an excellent sport for children to learn for many different reasons, including to make children more physically healthy, mentally well, and build confidence, self-esteem, and respect for others.

British Judo Membership Fees Set for Price Increase Scroll to top
Select the fields to be shown. Others will be hidden. Drag and drop to rearrange the order.
Click outside to hide the compare bar
Compare