British Judo has today announced the team for the Junior European Judo Championships to be held in Vantaa, Finland from 12-15th September.

Kelly Petersen-Pollard (-70kg) enters in fantastic form having made the final at every competition she has entered this year, claiming gold at the last four, including the prestigious Paks and Berlin Junior European Cups.

She is joined by another player in fantastic form, Josie Steele (-57kg). Steele has medalled at her last five competitions, the most notable being gold in Paks and silver in Berlin.

Also selected is Yasmin Javadian (-52kg) who finished 5th at the 2018 Junior European Championships and Sian Bobrowska (-48kg) who has had a consistent season after three 5th place finishes and a bronze medal in Paks. Completing the women’s team is Jasmine Hacker-Jones (-52kg) who took bronze earlier in the year at the Kaunas Junior European Cup.

For the men Joshua Giles (-60kg) is selected following his breakthrough performance in Paks in taking bronze, his first junior medal. Also selected is Henry Wakes (-66kg), who in his first year at the -66kg category, took bronze at the Kaunas Junior European Cup. They will be joined by Lachlan Moorhead (-81kg) who was in fine form earlier in the year taking bronze medals at both the Coimbra and Kaunas Junior European Cups.

British Judo Elite Development Coach Colin Oates said: ‘Looking forward to the Junior Europeans, we have selected a strong team and believe on their day each athlete is more than capable of producing a performance to be proud of. We are into the final stage of preparations and I am excited to go to Finland. At this age and stage, all we expect from the athletes is for them to stretch themselves and break through their highest ceiling to find out what they are capable of.’ 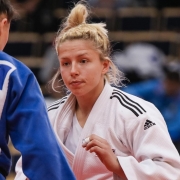 The John Davies Western Area Summer Camp Celebrates 10th Anniversary Scroll to top
Select the fields to be shown. Others will be hidden. Drag and drop to rearrange the order.
Click outside to hide the compare bar
Compare