You are here: Home / Events / Superb silver for Nairne at U23 Europeans 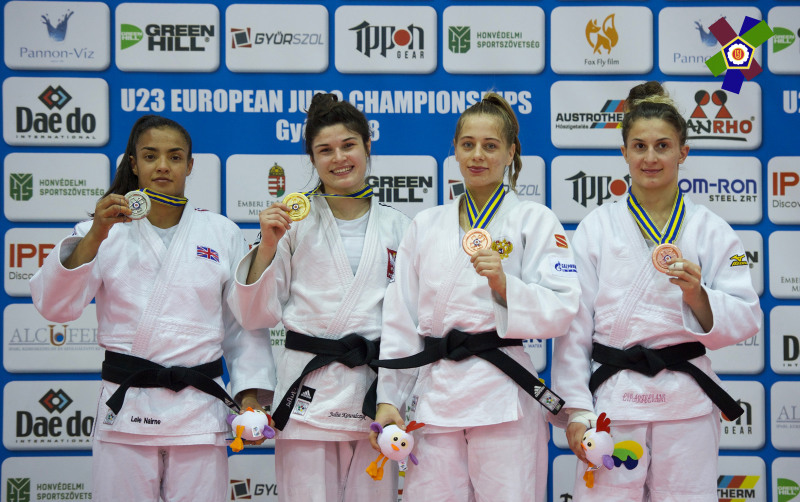 Lele Nairne won a superb silver medal at the 2018 U23 European Judo Championships on Friday 2 November in Gyor, Hungary.

The -57kg judoka from Weston-Super-Mare had previously fought at the Junior (U21) European Championships in 2016 but lost in the second round.

“At the start of day, I was looking forward to the event, and I’m really, really thrilled with my performance, especially after Glasgow (European Open).

“I’m pleased with my development over the last few months. The 9:30 ‘Hardskills’, for the last year, have improved my gripping and newaza.

“Now I think if I perform at my best I am able to win my fights. I now focus fight by fight, and not on the result.

“Thanks to everyone at the Centre, players and coaches, for helping me.” 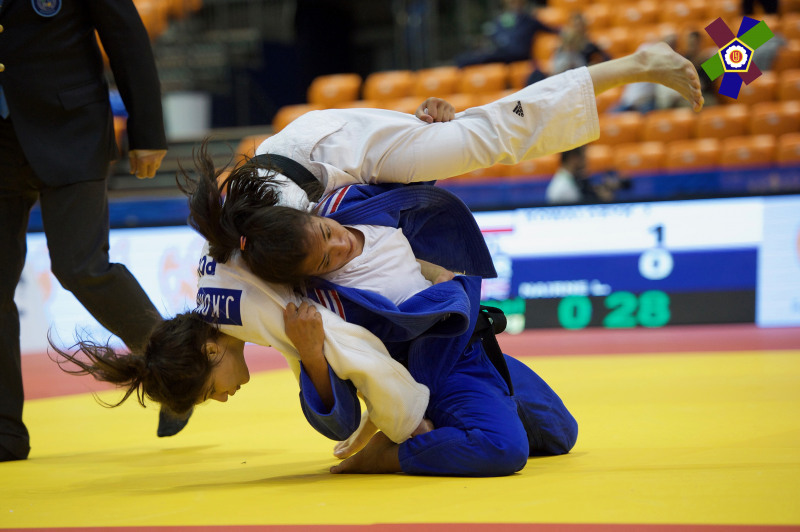 Nairne started her day against Romania’s Andrada Secrieru and the British fighter showed her patience in a potential tricky first fight.

Eventually, with over two minutes gone in the contest, Nairne set up the Sumi Gaeshi and threw the Romanian for ippon.

Belgium’s Mina Libeer was next up in the second round with a place in the quarter-finals up for grabs. Libeer won bronze at the Junior Worlds last year and went in as second seed today.

The British judoka picked up an early shido for false attack but did enough to stay in the contest as it went into golden score.

During added time it was Nairne who produced the better attacks and came close to scoring on multiple occasions.

That weight of attacks told as she forced Libeer to pick up two shidos for passivity before receiving a second shido herself for touching the leg.

Nairne though showed good contest management to get the better of a gripping exchange and forced Libeer to get a third shido, this time for gripping on the same side.

Current Junior European silver medallist Eteri Liparteliani (GEO) was always going to be a hard fight but Nairne made the best possible start as she threw the Georgian with Kouchi Gake in the first minute.

Unsurprisingly the Georgian judoka came flying back and there were a number of close calls for both fighters.

The British judoka picked up a shido for passivity to match an early shido Liparteliani received for grabbing the leg, but she did more than enough to hold off the Georgian and book a place in the semi-final.

Nairne took on Pauline Starke (GER) for a place in the final with the British fighter going in on the wrong end of a 1 – 2 win/loss record against the German.

Starke had beaten Nairne earlier this year at the Minsk European Open and on her way to winning the Junior European Championships in 2016.

All of the early pressure came from Starke as she forced Nairne to pick up a shido for gripping on the same side.

Nairne though spotted an opportunity to set up an attack using ashi-waza before throwing Starke for waza-ari using Laats.

With just over a minute left it looked like Starke had the fight won in newaza and as she secured osaekomi but Nairne showed great strength and determination to get out of it.

In the very exchange Nairne secured the win as she threw Starke for a second waza-ari score, once again using Laats.

“I am delighted for Lele. Her transformation this year, under the guidance of Denny (Roberts, EPC Academy Programme) and the Academy programme, has been incredible!

“Lele has always demonstrated great judo skills, but now, as a result of her hard work, she is living, more and more, the behaviours of a performance athlete.

“This is the difference and what allows her to consistently deliver her judo – which, as we saw today, is dynamic, spectacular and a joy to behold.

“Her focus at training is the best it has ever been, and I believe this is a stepping stone for great things to come.

“I know today’s performance, and result, will make so many people happy. You can’t help but love Lele.”

Alex Short (-66kg) made a solid start on his first major championships as he proved to be too good for Christos Skouroumounis (CYP).

Short forced his opponent into picking up two early shidos for stepping out and defensive posture.

The British judoka had to wait till golden score to get the win, throwing the Cypriot judoka with Osotogari.

Russia’s Mirzoiusuf Gafurov (RUS) was a big step up in the second round though and Short soon found himself a waza-ari down.

The Russian continued to attack, and he soon had the win, throwing Short for a second waza-ari score.

Josie Steele (-57kg) went out in the first round to Germany’s Anne Schmidt. The Germany fighter showed her experience as she forced Steele into picking up three shidos.

Competition starts at 1000 UK time with live coverage via EJU.net. Follow @BritishJudo on Twitter for live updates and you can find the full draw on ippon.org

Piovesana crowned U23 European Champion Scroll to top
Select the fields to be shown. Others will be hidden. Drag and drop to rearrange the order.
Click outside to hide the compare bar
Compare