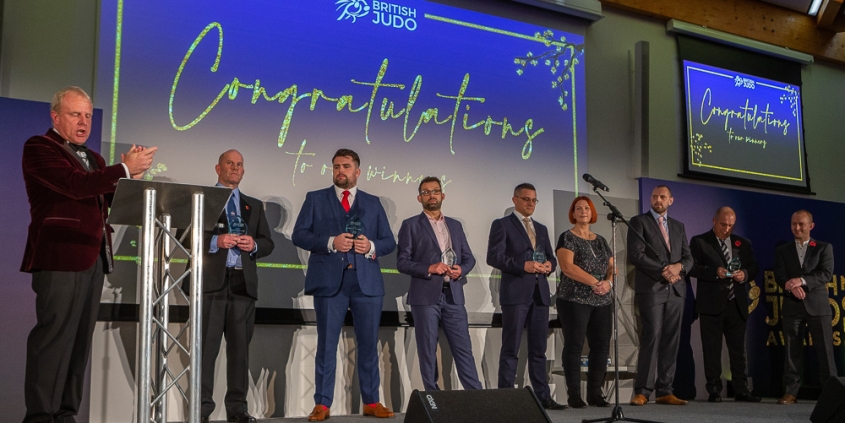 Saturday saw the return of the British Judo Awards Evening; it was a night to celebrate the fantastic achievements of British Judo members who have excelled as well those who have given up so much of their time to help others get the most from the sport we love.

The evening was filled with laughs, magic and some questionable singing – more on that later! 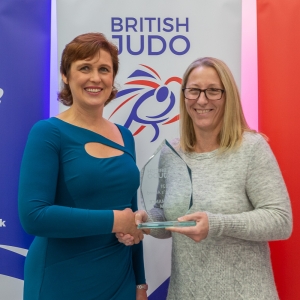 The President’s Award was presented to the GB Judo Performance Team, following their hard work in preparing the GB Judo Olympic and Paralympic squads for the rescheduled Tokyo Games. A Games that resulted in British Judo bringing home three medals.

There was a special recognition for Alan Stanbra for his exceptional service to the sport of judo for number of years. Alan is retiring from his role as Secretary for Yorkshire and Humberside area after 40 years of service.

A new award category for this year was the British Judo Heroes Award which, through the magic of television, was introduced by British Judo legend Neil Adams.

Our British Judo Heroes have been recognised by their judo communities for their impact and inspiration throughout the lockdown period.

This award recognises the efforts and achievements of individuals who have tirelessly dedicated their time throughout the pandemic, whether it be through providing virtual coaching sessions, offering advice and support, volunteering, caring for others or providing a communication platform for clubs and members to stay in touch with each other throughout the lockdown period.

Due to the incredible achievements by all our nominated heroes, it was impossible to select one single winner for the award, so, in a British Judo first, to show our appreciation for all the hard work and commitment shown to their clubs and communities, all nominees were crowned winners of the British Judo Heroes Award.

Matt Rush was presented with the Adaptive Award. Matt is a fantastic advocate for disability judo and there is nothing he would not do for his judo kids and the adaptive community across the country. Non more evident than when he stepped up as Head Coach for the adaptive team travelling to Cologne. Matt looked after the delegates, athletes and coaches to ensure they had a successful trip.

A short break to the award ceremony followed as starters were served. Our resident food critic, following his appearance on Channel 4’s Come Dine With Me, Chris Skelley scored the food an 8!

The next set of awards were our Judo Values Awards. The judo moral code is a set of ethics and values written by judo founding father Jigoro Kano. Courage, respect, modesty, sincerity, friendship, honour, politeness and self-control. Values that are not only important in the dojo, but also in life.

Our Judo Values Award celebrates members who embody our sports values, both on and off the mat, with winners selected by their areas. 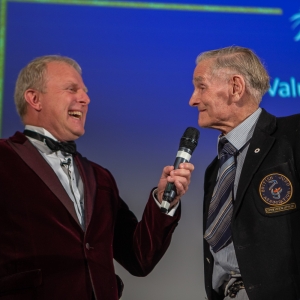 Joe Glynn has dedicated over 75 years of his life to coaching. During this time he has worked with multiple Great Britain and England judoka.

Our Veteran Male and Female Award winners were selected by the British Judo Association’s Masters Commission. Veteran Male winner Patrick Bryan has tirelessly dedicated his time to promoting Masters Judo over the past 6 years. He does this solely for. The good of the sport which he self-funds, whilst inspiring everyone he encounters.

Dianne White is our Veteran Female winner. Dianne has enjoyed consistent performances and successes in European and World Veterans for many years. She also coaches and manages one of the most medalled veterans’ clubs and spent time during lockdown keeping the community together through online coaching sessions.

The British Judo Inclusion Award was awarded to Samurai Judo Club’s Olivia Turner. Olivia has been involved in coaching, refereeing and volunteering at multiple judo events for several years. She also runs unique technique session, introducing inclusivity into her local club, where they are able to value and nurture players of all abilities and backgrounds.

Prior to the main courses being served, guests were treated to a magic show by magician and member of the magic circle Ed Sumner.

Our Female Athlete of the Year needs no introduction, winner of Team GB’s first Olympic medal at the Tokyo Olympic Games and three-time Grand Slam medallist in 2021; Chelsie Giles.

The penultimate award of the evening was the prestigious Roy Inman Award, the award is presented in honour of Roy and his positive contribution to British Judo. Roy was national coach from the 1970’s up until 2000, and has had influence upon a significant number of our competitive judo players, particularly the women’s GB team. 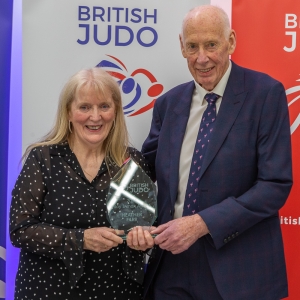 Our Roy Inman Award winner competed in the +72kg weight category and retired from competitive judo in 1984 having accumulated 13 medals at major international competitions with 26 career medals. She was a part of the first women’s GB Squad to compete at the first Women’s Judo World Championships. She was coached, and supported, by Roy throughout her elite career and once she retired, went on to assist him with coaching the team.

Working alongside her husband, Dave, the pair coached at Harmondsworth Judo Club, but now living in Cornwall, she regularly coaches at St Ives Judo Club.

The final award of the evening was our Male Athlete of the Year. It has been quite the 2021 for our winner. A year which has seen him win gold in Tokyo to be crowned Paralympic Champion and be sent a lifetime supply of pork pies and Yorkshire tea!

Our Male Athlete of the Year goes to the nicest man in judo, Chris Skelley.

We couldn’t let Chris leave the stage before sharing a video he recorded prior to the Games stating his karaoke song of choice would be Dancing Queen by ABBA. It just so happened that the evening’s entertainment was ABBA tribute act ABBA Gems.. Cue the penny drop moment when Chris realised what was about to happen. For those of you that have not seen the video on our social media channels. Enjoy!

Recent Samurai Judo Club Results – British Judo back in full effect! Scroll to top
Select the fields to be shown. Others will be hidden. Drag and drop to rearrange the order.
Click outside to hide the compare bar
Compare