You are here: Home / Events / Silverware in Dakar and seventh place finishes at The Hague 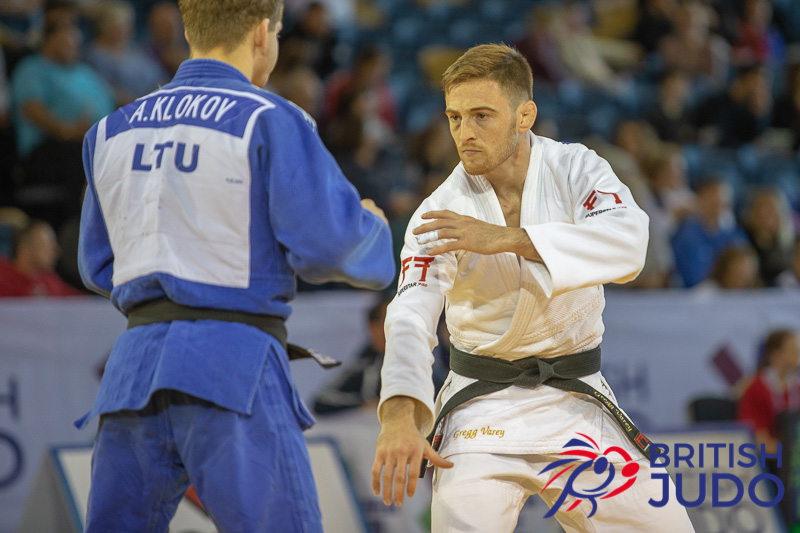 GB Judo finished the final day of competition at the 2018 The Hague Grand Prix with two seventh place finishes while there were two medals at the Dakar African Open.

GB Judo had enjoyed a super Saturday in the Netherlands with gold for Sally Conway (-70kg), silver for Alice Schlesinger (-63kg) and bronze for Amy Livesey (-63kg).

Natalie Powell (-78kg) was going in off the back of a silver medal at the Abu Dhabi Grand Slam last month.

The Irfon judoka went in as top seed and made short work of her first opponent, Alice Matejckova (CZE).

Powell took a waza-ari lead with just over a minute on the clock and followed that up just forty seconds later, throwing Matejckova for ippon.

Russia’s Antonina Shmeleva was next up, and the British judoka struggled to get into the contest.

Shmeleva’s greater attack rate lead to passivity shido for Powell and the Russian went ahead by waza-ari with just over a minute left in the contest.

Powell pushed hard for an equalising score but couldn’t get through Shmeleva’s defence and dropped into the repechage final against China’s Zhenzhao Ma.

Ma had won bronze at the Abu Dhabi Grand Slam and she showed why as, after a fairly even start, she threw Powell for waza-ari with a driving uchi-mata score.

The British fighter responded perfectly though and soon had a waza-ari score on the board herself.

In the very next exchange though, a clever change of direction from Ma saw her catch Powell for a second waza-ari score, leaving the British fighter in seventh place.

Sarah Adlington (+78kg) was going into The Hague off the back of three consecutive fifth place finishes, including at the World Judo Championships in Baku.

She received a bye into the second round where she faced Anna Zaleczna (POL). The Polish fighter was very active and put in a lot of attacks but very few were particularly effective.

However, Adlington found herself down by two shidos to one as the fight approached the final minute.

Zaleczna then took a waza-ari lead as she countered Adlington’s attack but the British fighter didn’t stop pushing for the score and her persistence paid off as she threw the Polish fighter for waza-ari and went straight into osaekomi.

Anne Fatoumata M Bairo (FRA) was next up in the quarter-finals and Adlington was positive from the very start but the French judoka countered her for two waza-ari scores.

It proved to be a close fight with both judoka picking up two shidos as the fight approached its final minute.

Ceric took the win though as she threw Adlington for waza-ari with just twelve seconds left in the contest to leave the British fighter in seventh.

-90kg duo Frazer Chamberlain and Jamal Petgrave both went out in the third round.

A waza-ari in the final minute gave Chamberlain the win over Bas Van Empelen (NED) in his first-round contest as the British fighter showed some nice ashi-waza to win a tough fight.

He then proved too strong for Samuli Viitanen (FIN) in the second round as he forced the Finnish judoka into picking up three shidos.

Former WRL 1 and European champion Aleksandr Kukolj (SRB) was next up in the third round and Chamberlain soon found himself two shidos down.

Kukolj secured the win in the second half of the fight as he threw Chamberlain for ippon with a strong bit of ashi-waza.

Petgrave had a bye into the second round and he had to tough it out against Japan’s Kazuya Maeda. Petgrave made a positive start but going into the final seconds he was two shidos down.

The British fighter continued to press though, and he forced Maeda into a weak attack which Petgrave countered for waza-ari with a second left on the clock.

Home fighter Noel Van T End (NED) was Petgrave’s opponent in the third round and the Dutch fighter used his experience well as he caught the British fighter for a waza-ari score with just over a minute left.

As Petgrave went in search of a score in the final minute, Van T End spotted his chance and threw the British fighter for a second waza-ari.

There were two medals for GB Judo at the Dakar African Open with Rachael Hawkes taking home -70kg silver and Gregg Varey bagging bronze at -66kg.

This was Hawkes’ first Continental Open medal and the British fighter made a strong start as she beat Aguirata Kabore (BUR) inside 13 seconds.

She then had to grind out her semi-final against Karene Agono Wora (GAB), outlasting her opponent in a tough contest.

Ayuk Otay Arrey Sophine (CMR) proved too strong in the final though, leaving Hawkes with silver.

Varey, added a third Continental Open to his collection with a strong showing in Dakar. He made short work of Moctar Nourou Sourakatou (NIG), winning his first-round fight with just 42 seconds on the clock.

His quarter-final was also won inside four minutes as he saw off the challenge of Adebayo Frederic Olympio (TOG).

His semi-final saw him take on former African Senior Champion Houd Zourdani (ALG) and the Algerian judoka proved too strong on this occasion.

However, Varey made up for any disappointment as he came through his bronze medal fight against Senegal’s Jeannot Diatta, with a waza-ari score proving decisive.

British Judo Launches “Safeguarding Adults” Policy Scroll to top
Select the fields to be shown. Others will be hidden. Drag and drop to rearrange the order.
Click outside to hide the compare bar
Compare