You are here: Home / GB Judo / Silver medal for Oates at European Championships 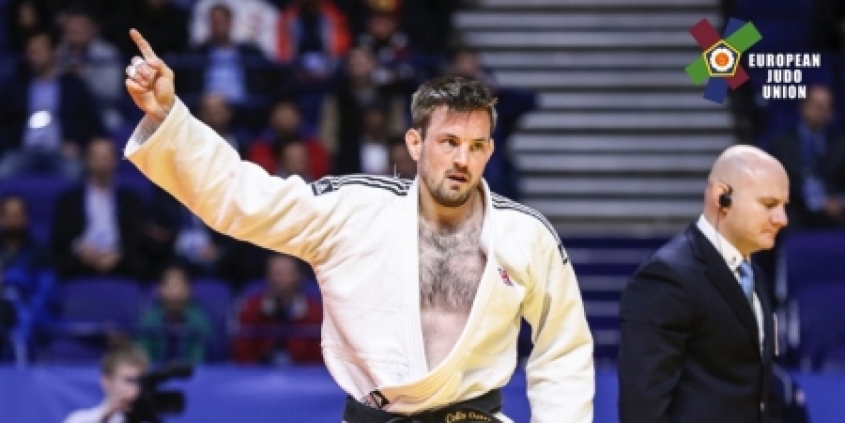 Colin Oates added a European silver to his medal collection as British Judo made a very strong start on the opening day of the 2016 European Judo Championships in Kazan, Russia on Thursday 21 April.

In arguably the biggest result of his career to date Oates showed all of his experience, all-round skill and tactical nous to makes his way through the rounds against some tough opposition and pick up his second European Championship medal after a bronze in 2011.

The -66kg British judoka’s ne-waza skills came to the fore in the first contest with Javier Delgado (ESP) as a waza-ari via hold down was enough to see him through. His second contest against Jasper Lefevere (BEL) was another tactical affair however this time Oates was able to throw for yuko before securing another waza-ari by hold down to continue his winning run against the Belgian and for a place in the quarter-final.

Italy’s Fabio Bastile was coming in off the back of a silver medal at the Tbilisi Grand Prix and proved a tough opponent however going into the final moments Oates was leading by a shido before making the contest his by forcing the Italian to tap out via strangle.

The semi-final with Adrian Gomboc (SLO) was safe to say a lung-bursting encounter with both men unable to really gain a foothold in the contest as they were tied on one shido each going into golden score. 110 seconds of golden score went by before Oates was finally able to secure the match-winning throw for yuko to secure his place in the final.

In the final Oates was up against Vazha Margvelashvili (GEO) who was coming in off the back of three Grand Prix medals in 2016 alone. In another tactical tussle it was the powerful Georgian who took the win throwing Oates for ippon to take the medal.

Speaking afterwards Oates was pleased with his day’s work though disappointed to miss out on gold:

“It was a really good day today. Amazing that I can still feel gutted though because I felt I had the chance to become European champion and missed it. That being said it’s great reinforcement ahead of the Games and to take another European medal is a great achievement.”

“Good opening day with some strong performances, results and positives to take forward into the next events.”

There was also a highly encouraging result for Nekoda Davis (-57kg) as the 22 year old secured her best result at a senior major championships to date with fifth.

A day before her 23rd birthday Davis also displayed her improving all-round ability as she forced her first opponent Tatiana Kazeniuk (RUS) to tap out via strangle before a throw for waza-ari against Arleta Podolak (POL) took her into the quarter-final.

Her opponent Helene Receveaux (FRA) was going in ranked seventh in the world and despite being on a losing run against her Davis was not far off scoring on more than one occasion. However a shido in the final minute gave the French judoka the advantage and Davis was unable to make up the difference.

This set-up a repechage contest with Miryam Roper who had beaten Davis decisively in the Samsun Grand Prix. Roper made a fast start forcing the British judoka to concede and shido before scoring a yuko. However with a minute and a half left Davis was able to execute a lovely juji-gatame to take her place in the bronze medal contest.

Davis came up against Nora Gjakova (KOS) who proved a very strong opponent as she threw Davis for waza-ari. Davis responded well as she pushed hard for the win with the Kosovan picking up three shidos but doing enough to pick up the win.

GB Elite Performance Coach Kate Howey said: “Nekoda was very unlucky not to win a medal today and I am happy with her performance. Tactically she fought well, scored in ground work twice and looked strong.

“A fifth for Nekoda at Europeans shows that she is improving having lost first round last year. Moving forwards there are a few more competitions before the Games to put little things right.”

Ashley McKenzie (-60kg) was also in action on the opening day and made a solid start as he proved too strong for Albanian judoka Indrit Cullhaj throwing him for waza-ari twice in quick succession. His next contest saw him take on France Junior European champion Walide Khyar and it proved to be a seesaw encounter.

McKenzie made the early running as he threw the young Frenchman for yuko before the Khyar countered to throw the British judoka for waza-ari with a couple of minutes left in the contest. That proved to be the winning score as Khyar continued in the competition eventually finishing with gold.

10 things to know about the European Judo Championships

Home nations off to Commonwealth Championships Scroll to top
Select the fields to be shown. Others will be hidden. Drag and drop to rearrange the order.
Click outside to hide the compare bar
Compare