You are here: Home / Featured / Silver for Livesey in inaugural Montreal Grand Prix 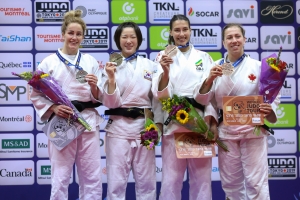 British Judo’s Amy Livesey (-63kg) was the stand out performer at this weekend’s Montreal Grand Prix, winning silver, in what was the first time the IJF Grand Prix has been staged in Montreal.

Livesey entered Montreal ranked 21st in the World and knowing a strong performance will see her bid for World Championship selection later this year, and Olympic qualification grow. Following a bye in the opening round, Livesey faced Alisha Galles (USA) in the second round. Victory saw her progress to face Alexia Castilhos (BRA) in the quarter-final, an athlete ranked only 2 places behind Livesey in the world rankings. Despite what looked a close match on paper, it was far from that, Livesey throwing her opponent in under 45 seconds to win her Pool and progress to the semi-finals.

In the semi-final Livesey faced home athlete, Catherine Beauchemin-Pinard (CAN), the world number 9. Despite the difference in world rankings it was Livesey who emerged victorious and booked her place in the final against Mokhee Cho (KOR). With the score tied, the final went to Golden Score and it was Cho that was able to find a winning score to claim the gold and Livesey claiming the silver.

Ashley McKenzie (-60kg) was the first of the British Judo athletes to compete at the Montreal Grand Prix. Drawn in Pool B, McKenzie had an opening round bye before facing Joshua Katz (AUS) in the second round. McKenzie’s experience saw him prevail against his younger opponent and set up a quarter-final match against Jorre Verstraeten (BEL), an athlete ranked just 4 places behind McKenzie in 18th. The match was as close as the world rankings suggested, with the match running the full 4-minutes and McKenzie winning by a single Waza-ari score to win his Pool and progress to the semi-final.

In the semi-final McKenzie faced world number 1, Robert Msvidobadze (RUS). McKenzie gave a great account of himself against the current World Championship silver medallist, after 2mins 30secs of Golden Score it was the Russian who was able to find a winning score to progress to the final and relegate McKenzie to the bronze medal match to face Harim Lee (KOR). In another close match that was inseparable after 4-minutes, the match entered Golden Score and it was the Korean who took advantage of a tiring McKenzie and was able to find a winning score after 2minutes 17secs. The result seeing McKenzie finish in 5th place.

Eric Ham (-73kg) entering Montreal ranked 88th in the world, had a bye in the opening round and faced Igor Wandtke (GER) in the second round. Wandtke, ranked 27th in the world, and with a bronze medal from the recent Hohhot Grand Prix was heavy faviorute for the match. However, it was Ham emerged victorious after throwing his opponent in under 45 seconds and progress to the quarter-final to face Victor Scvortov (UAE), the world number 18. Ham gave a great account of himself against a world-class opponent and former World Championship bronze medallist. The match ran its duration with the UAE athlete progressing to the semi-final by virtue of a single score. Ham was progressed to the Repechage where he faced Eduardo Barbosa (BRA), a former Pan-American Championship Champion. Again, the match ran the full duration and Ham pushed his experienced all the way, but it was the more experienced Brazilian who progressed courtesy of a single score. The result saw Ham finish 7th and climb an impressive 19 places in the world rankings to 69th.

2018 European U23 Champion Lubjana Piovesana (-63kg) had a bye in the opening round and was defeated by eventual gold medallist Mokhee Cho (KOR) in the second round following an accumulation of three shido’s and handing her opponent victory.

Recent European Games 5th placed athlete, Frazer Chamberlain (-90kg) had a bye in the opening round and faced home athlete Mohab Elnahas (CAN) in the second round. Clearly buoyed by the home support the Canadian athlete defeated Chamberlain to progress to the quarter-final.

2018 World Junior Championship bronze medallist and world number 62 athlete, Shelley Ludford (-78kg), had a bye in the opening round and faced world number 32 Nefeli Papadakis (USA) in the second round. In what was a cagey match, it was the American who prevailed to progress to the quarter-final and eventually finish 5th.

Kimberley Renicks (-48kg) was drawn against Gulkader Senturk (TUR) a former European Junior bronze medallist, in the opening round of the -48kg category. Senturk is currently ranked 34th in the world rankings, 27 places ahead of Renicks. It was the Turkish athlete who won by a single score to eliminate Renicks and go on to finish in 5th.

2012 Olympian, Daniel Williams (-73kg) had a bye in this opening round and faced home favourite, world number 23, Antoine Bouchard (CAN) in the second round. With 85 world ranking places between the two, it always proved to be a tough opening match for Williams. With the scored tied at the end of 4-minutes, the match entered Golden Score, where the Canadian was able to find a winning score to progress in the competition and eliminate Williams. Bouchard eventually went on to win bronze.

Making his return to competitive judo after almost three years away, the 2014 Commonwealth Games gold medallist, Christopher Sherrington (+100kg) faced former European Junior Championship silver medallist, Johannes Frey (GER), an athlete ranked 42nd in the world in the opening round. A score down with 20 seconds to go, Sherrington went on the attack and was unfortunately caught by his opponent and thrown for ippon. Frey later went on to finish 5th.

William Burt proving you’re never too old to start judo Scroll to top
Select the fields to be shown. Others will be hidden. Drag and drop to rearrange the order.
Click outside to hide the compare bar
Compare