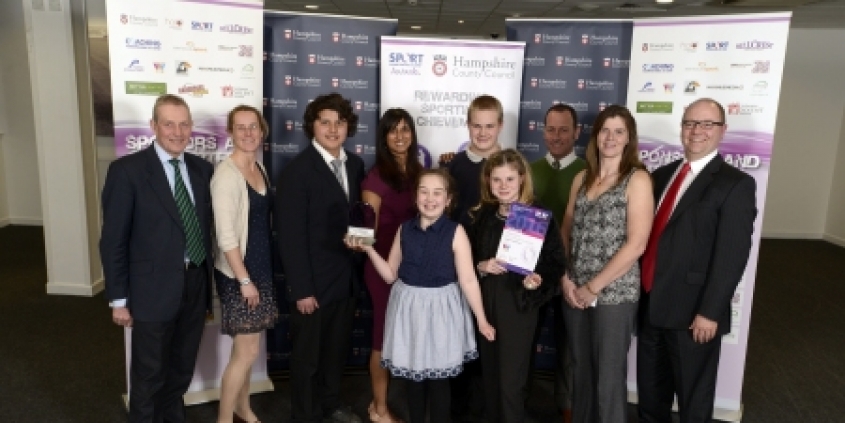 The gala evening was hosted by Hampshire County Council and Sport Hampshire & IOW at Southampton Football Club’s St. Mary’s Stadium and celebrated sport in the county over the last 12 months.

Shin Gi Tai received the award in recognition of its work in encouraging young people to take up sport in the county through its satellite club based at Dove House School. The club started with seven pupils and has grown significantly over the last 12 months rising to 20.

The club scheduled its classes to run directly after the school day and worked closely with the head of P.E. at the school to identify and encourage pupils not currently engaged in sport to try judo. Shin Gi Tai then provided a number of scholarships to transition the pupils from the school to its main club in Basingstoke to become long term participants.

In October last year the club sent four pupils to the Hampshire Judo Special Needs Championships where every member of the squad won a medal (one Gold, one Silver and two Bronze).

“As a club we’re really pleased to have to won this award”, said Shin Gi Tai’s Coach Bryan Andrews.

“Judo is such a great sport for people who don’t enjoy team sports and we’ve seen during the course of the year a number of the older pupils developed real confidence in their abilities. We went into school assemblies and announced promotions to new pupils in front of the whole school. It was a real boost to have their achievements celebrated publicly”.

British Judo Regional Development Officer Chris Doherty added: “Shin Gi Tai are a great example of how a judo club should work. They are very proactive especially in developing judo players who have learning disabilities which has the backing and support of British Judo”.

Judo on show at the 2016 Durham Dash Scroll to top
Select the fields to be shown. Others will be hidden. Drag and drop to rearrange the order.
Click outside to hide the compare bar
Compare