You are here: Home / Events / Seventh for Renshall in Paris 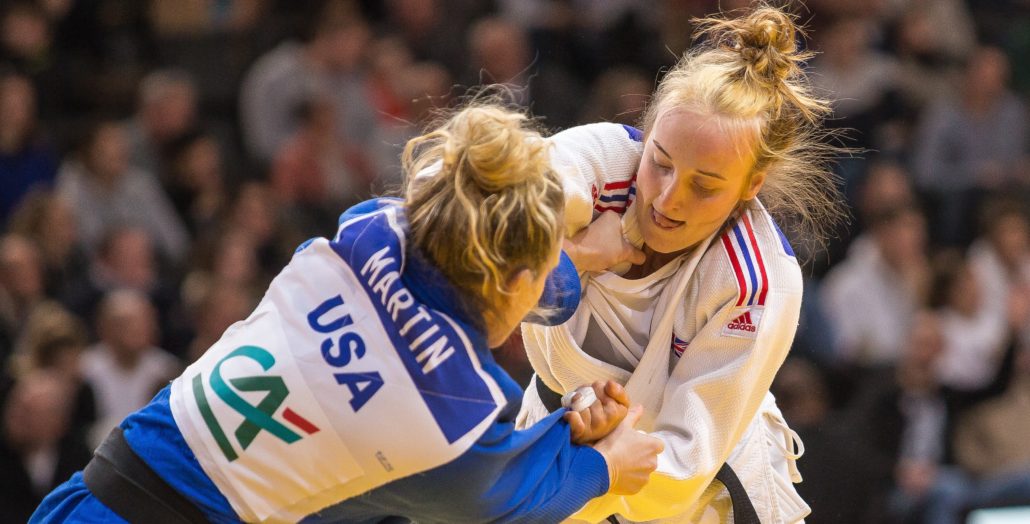 Lucy Renshall (-63kg) finished seventh for GB Judo on day one of the 2019 Paris Grand Slam on Saturday 9 February.

The SKK Judo Club judoka had finished fifth at the last two Paris Grand Slams and went in among the top eight seeds.

After a bye into the second round, Renshall started her day against Ekaterina Valkova (RUS). It proved to a cagey contest with neither judoka particularly dominant.

It came down to shidos with Renshall showing her tactical and gripping ability to force Valkova into a defensive posture in the final minute, resulting in a third and final shido against the Russian.

This put Renshall through to the third round against Denmark’s Junior World medallist Laerke Olsen. Both fighters picked up a shido going into the final minute in another event content.

Renshall’s experience showed in the final minute as she took her change and threw Olsen for waza-ari.

This setup a quarter-final against Rio 2016 gold medallist Tina Trstenjak (SLO) with the Slovenian having won each of their five contests to date.

They had also faced each other at this stage of the last two Paris Grand Slams and it turned into another close contest.

A lightning fast drop attack by Trstenjak gave her the waza-ari lead with just over a minute gone in the contest.

Renshall however kept up the pressure and forced Trstenjak into getting a shido. The Slovenian did enough though to hold off the British fighter and force Renshall to drop into the repechage finale.

There she faced Japan’s Aimi Nouchi. The Japanese judoka is two-time Grand Slam winner and it was another pretty evenly matched contest.

Despite picking up two passivity shidos, Renshall fought well to force Nouchi into getting a second shido for defensive posture and forced the contest into golden score.

Nouchi did enough though in golden score to result in Renshall getting a third shido for passivity, meaning the British fighter missed out on fighting for bronze.

Chelsie Giles (-52kg) and Ashley McKenzie (-60kg) both went out in the third round, losing after being ahead early doors.

Giles, on her Paris debut, put in a very professional performance to see off Nathalie Rouviere (GER) in her first content.

Giles countered Rouviere for waza-ari before showing her newaza skills late on in the contest to secure osaekomi.

She took on Rio 2016 silver medallist Odette Giuffrida (ITA) for a place in the quarter-finals. Giles made a great start as she countered Giuffrida for waza-ari.

The Italian though showed her class to catch Giles with some sharp ashi-waza in the final minute for a waza-ari score.

The fight went into golden score and it was Giuffrida who took the win as she countered Giles for a second score.

McKenzie had to come from behind in his second round contest against Artem Lesiuk (UKR). The Ukrainian took a waza-ari lead with just over a minute left.

The British fighter responded perfectly though as he pressured Lesiuk into a weak attack which he countered for waza-ari.

The fight went into golden score and McKenzie took the win as he threw Lesiuk for ippon.

McKenzie made the best possible start to his third round contest against Daniel Ben David (ISR), throwing the Israeli judoka for waza-ari inside ten seconds.

Ben David though took her chance well with just over a minute gone on the clock as he unbalanced McKenzie with some ashi-waza before showing good control to finish the throw.

Kelly Staddon (-48kg) was on her Paris Grand Slam debut where she faced Nathalia Brigida (BRA). It was a very cagey contest with Brigida doing enough to force Staddon into getting three shidos.

Hard fought Paris fifth for Yeats-Brown Scroll to top
Select the fields to be shown. Others will be hidden. Drag and drop to rearrange the order.
Click outside to hide the compare bar
Compare