You are here: Home / Featured / Seventh on Europeans debut for Bekky Livesey 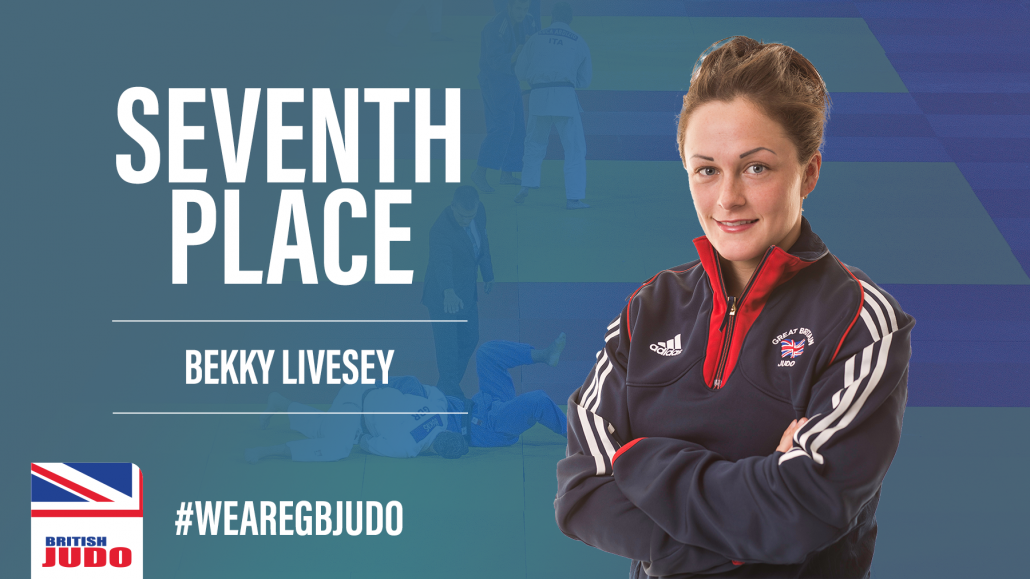 There were no medals on day one (Thursday 20 April) of the 2017 European Judo Championships in Warsaw, Poland for the British team however Bekky Livesey impressed to finish seventh on her debut.

The St Helens judoka made a strong start in the -57kg category against Lithuania’s Anastasija Michailova going ahead by waza-ari early on before finishing the contest with an ippon via a hold down. This setup a last 16 contest with the seventh seed Anastasiia Konkina (RUS). In an exciting match the British judoka went ahead by two waza-ari inside the first minute before the Russian pulled one back.

Livesey did well to hold off Konkina throughout the rest of the contest as she booked her spot in the quarter-finals. There she faced Kosovo’s Nora Gjakova, bronze medallist at last year’s European Championships, and the British judoka was more than holding her own against the World No.6.

However, the Kosovan was able to counter and roll Livesey for waza-ari before strong work on the ground gave her the contest ending ippon score. Dropping into the repechage Livesey was up against the highly experienced Russian sixth seed Irina Zabludina for a place in the bronze medal matches.

Again, Livesey started well despite conceding an early shido but the Russian was able to go ahead by waza-ari before putting together a nice combination to finish the contest with an ippon score.

Ashley McKenzie (-60kg) was the other British judoka to place on day one as he backed up his seeding with a solid showing at the Torwar Arena. McKenzie was too good for Italy’s Carmine Maria Di Loreto as he forced the Italian to pick up a shido in golden score.

In the quarter-finals though McKenzie found himself on the wrong side of the referee as he took on Georgia’s World No.3 Amiran Papinashvili. The British judoka was generally more positive throughout but found himself two shidos to one down going into golden score.

In golden score Papinashvili forced McKenzie to pick up a third shido which meant the British judoka dropped into the repechage. There he faced Spain’s Francisco Garrigos and the Spainard controlled things well from the start and went ahead by waza-ari.

He followed that up not long after with some strong ne-waza to hold McKenzie down for 20 seconds for the ippon score.

Chelsie Giles and Kelly Edwards were also in action in the -52kg category with Giles making her senior Europeans debut in Warsaw. The 20 year old took on home judoka and World No.24 Karolina Pienkowska in the first contest of the day and soon found herself two shidos down. However, the British judoka pulled off two waza-ari scores in the final thirty seconds to take the win.

Olympic and World champion Majlinda Kelmendi (KOS) was next up in the last 16 and it was a definite step up in class for the British judoka. Kelmendi’s greater experience and power told as she scored three waza-ari though Giles gave a good account of herself.

Edwards took on France’s World No.11 Amandine Buchard in the first round and it was the Telford judoka’s superior attacking that made the difference. There were no scores on the board as the contest went into golden score and Buchard picked up another shido for passivity to give Edwards the win.

The British judoka next took on Russia’s Alesya Kuznetsova and it was another close, tactical affair as it the contest went in to golden score. Edwards was again looking to force a score or shido but was caught on the ground and forced to tap out as Kuznetsova applied the armlock.

“There were some good performance today especially from the youngsters like Bekky Livesey, who didn’t look out of place on this stage. This is all part of their development at the beginning of this cycle and is about fighting the top judoka. Chelsie Giles fought Kelmendi, the Olympic and World champion, and gave a good performance.”

Friday will see Alice Schlesinger (-63kg) and Amy Livesey (-63kg) in action from the GB Judo team. There will be live coverage via eju.net and you can follow @BritishJudo on Twitter for updates on the British judoka

European Bronze for Alice Schlesinger Scroll to top
Select the fields to be shown. Others will be hidden. Drag and drop to rearrange the order.
Click outside to hide the compare bar
Compare