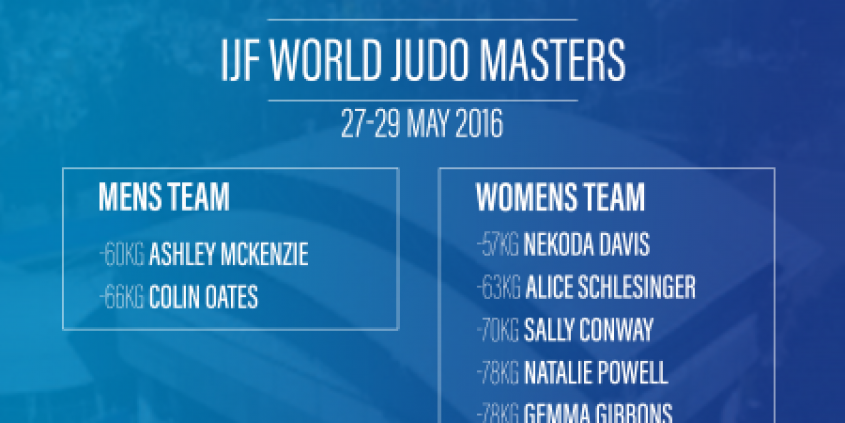 Seven of Great Britain’s top judoka are prepared to take on the world’s best at the invite-only IJF World Masters in Guadalajara, Mexico from 27-29th May 2016.

The IJF World Masters is the final event in the Rio 2016 Olympic Games qualification period and features only the worlds best players invited by the International Judo Federation (IJF).

Ashley Mckenzie (-60kg), Colin Oates (-66kg) and Nekoda Davis (-57kg) will be in action on day one of the competition tomorrow (27 May), at the Lopez Mateo Sports Center.

Alice Schlesinger (-63kg) goes into the competition as fourth seed, while Sally Conway (-70kg) is seeded seventh in her category. Both Schlesinger and Conway will be in action on Saturday (28th May).

Sunday (29th May) will see the -78kg British pair, Gemma Gibbons and Natalie Powell in action for the final time in the qualification period. The pair go into the final Olympic qualification opportunity with the knowledge that only one of them can compete at the Olympic Games. With Powell ahead in the rankings, Gibbons will be striving to make a final impression in Mexico.

Elite Performance Coach, Kate Howey, said: “This is the last qualification tournament in a long two year period and once again we are looking for the players to put in their best performance.

“Any medal here is good but more importantly the points could boost the players’ world ranking and get them seeded at the Olympics in Rio, which would be a great advantage.”

Follow the action live with @BritishJudo on twitter and send your support to the team using #WeAreGBJudo.

Watch all the action live on ippon.tv – preliminaries begin at 5pm (BST) with the final block starting at 11pm (BST).

Fuelling the Body for Judo

Improvements made to Grading Schemes Scroll to top
Select the fields to be shown. Others will be hidden. Drag and drop to rearrange the order.
Click outside to hide the compare bar
Compare