You are here: Home / Events / Second round exit on debut for Chelsie Giles in Baku 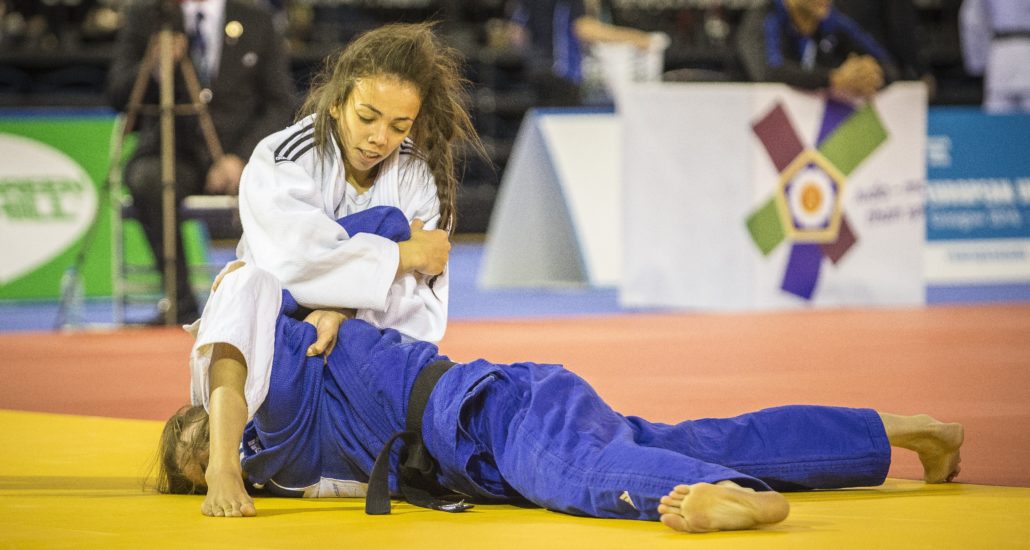 Chelsie Giles went out in the second round on day two of the 2018 World Judo Championships in Baku on Friday 21 September.

The Coventry judoka was making her Worlds debut and had earned her place in Azerbaijan with Grand Prix silver and bronze in Antalya and Budapest respectively.

In the first round of -52kg Giles took on home fighter Buyankhishig Purevsuren (AZE) and immediately looked to put her opponent under pressure.

Giles looked to be controlling matters and forced Purevsuren into a couple of weak drop attacks.

The British fighter took advantage in newaza to setup sangaku and she held the Azerbaijan judoka for ippon.

WRL 9 Charline Van Snick (BEL) was next up in the second round and the Belgian judoka has been in good form since moving up a weight.

Van Snick won bronze at the London 2012 Olympics at -48kg but has already earned multiple Grand Slam and Grand Prix medals at -52kg.

Giles made a good start as she immediately but Van Snick under pressure. The Belgian judoka showed her class though as she controlled proceedings and soon took the lead by waza-ari.

Giles forced Van Snick to pick up a shido for a gripping infringement but could not match her opponent’s attack rate and got a shido for passivity.

With little under two minutes remaining Van Snick secured the win with another waza-ari score to knock Giles out in the second round.

“Obviously a bit upset but I knew it was going to be a hard fight. It just didn’t plan out the way I wanted it to today.

“Next competition is Abu Dhabi (Grand Slam). I’m just training up till there now so, hopefully get back into it and bring a better performance next time.”

.@chelsiejudo: "It just didn’t plan out the way I wanted it to today"

GB Judo Team Announcement: 2018 Junior World Championships Scroll to top
Select the fields to be shown. Others will be hidden. Drag and drop to rearrange the order.
Click outside to hide the compare bar
Compare