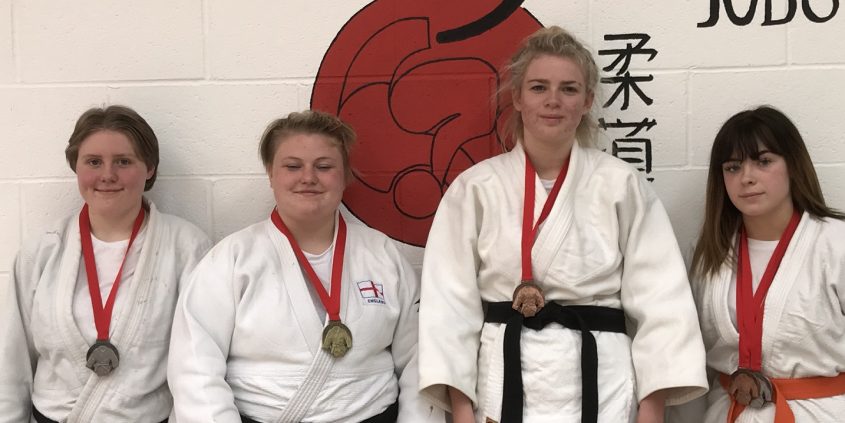 With a range of ages, weights and abilities taking part, from 14 year-olds dipping their toes in their first senior events right up to veterans, there were a number of strong performances across the board. Parent judoka Jane Mesher from Irfon, whose husband had fought at the Samurai’s Men Kyu Grades event the previous day, put up a particularly spirited performance, whilst Nicola Grange from 2As rolled back the years by winning Gold in both the Veterans and the Dan Grade Lightweights categories.

There were plenty of Dan grade points on offer throughout the day for developing judokas. Top of the points table was Emily Lawrence from Royal Navy, who clocked up 60 points towards her black belt, with another six players getting 40 points or more. Several of the brown belts gained enough points to be able to claim their black belts, including Zoe Donovan from Newport who has been attending Samurai events for many years.

In the Dan grade events, Frankie Marston from University of Northumbria (a former Samurai player, back at her old club) topped the points table with 40 points, whilst three other Dan grades each clocked up 30 points. Olivia Turner from Samurai and Charlie Bond from Team Bath gained enough points to secure their 2nd Dans.

There was an excellent atmosphere throughout the day, with all the players being determined but friendly and sporting at the same time.

Since they began running events nearly 40 years ago, the Samurai club have gone out of their way to ensure the women get the same chances as the men to gain higher grades. The club ran the first ever women’s veterans competition in Great Britain back in 1991 and many women have gained enough points for their higher Dan grades, right up to 5th Dan, at the club’s open events.

The next chance for the women to get black belt points at a Samurai event is their Masters and Senior High Grades Open for both men and women at Walsall Centre of Excellence on November 24th, whilst the Kyu grades also have the Rod Lane Kyu Grade Championships at the club to look forward to on 10th November.

2019 Baku (AZE) Grand Slam Preview
Scroll to top
Select the fields to be shown. Others will be hidden. Drag and drop to rearrange the order.
Compare
Wishlist 0
Open wishlist page Continue shopping
We use cookies to ensure that we give you the best experience on our website. By continuing to use our website, you agree to the use of cookies.OKRead our Privacy Policy