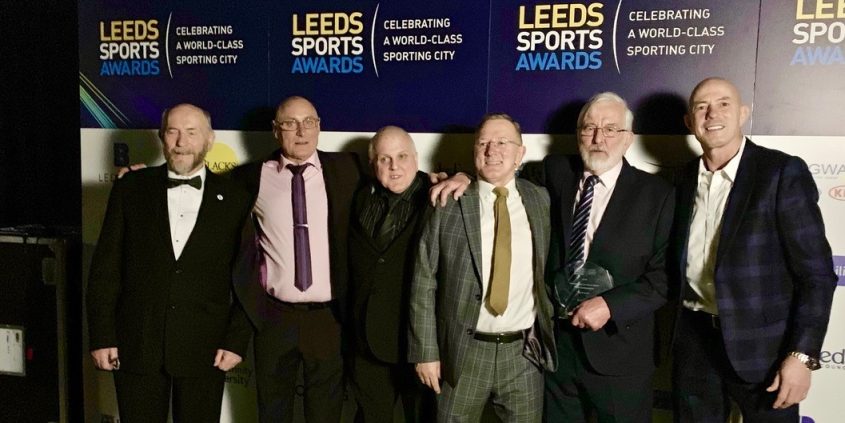 West Yorkshire Judo’s own Roy Francis was awarded the “Outstanding Contribution to Sport Award” at a highly prestigious awards ceremony this Thursday at the First Direct Arena in Leeds.

The event was covered by local news channel, BBC Look North, with over 850 attendees present. It was great to see Roy receive this fantastic award which goes a small way to recognising the herculean effort put in by this immensely modest man who epitomises the ethos of judo.

Roy is currently a 5th Dan and has been involved in judo since the 1950’s, running Aireborough Judo Club 2 nights a week and you will see him still volunteering at just about every Dan grading or competition in the area.

Roy was accompanied to the event by his wonderful family and members of the West Yorkshire Judo Committee.

It make me incredibly proud to see volunteers like Roy receive the recognition they deserve for the tireless work they put in year after year.

Roy was amongst a very esteemed cast of sportsmen and sportswomen on the evening included the likes of:

This is fabulous recognition for judo in one of the major sporting cities in the world.

JudoTots Off To a Flyer at Kingsley School
Scroll to top
Select the fields to be shown. Others will be hidden. Drag and drop to rearrange the order.
Compare
Wishlist 0
Open wishlist page Continue shopping
We use cookies to ensure that we give you the best experience on our website. By continuing to use our website, you agree to the use of cookies.OKRead our Privacy Policy