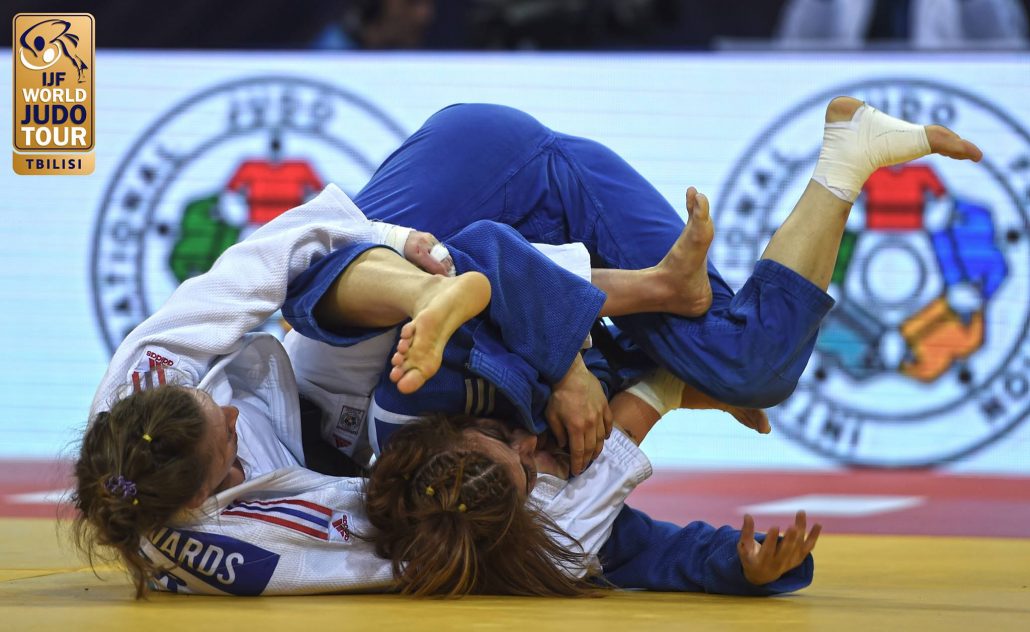 It was a difficult first day at the Tbilisi Grand Prix on Friday 31 March for the British Judo squad as three out of five judoka exited at the first round, while Chelsie Giles and Kelly Edwards secured 7th-placed finishes.

Chelsie Giles (-52kg), fresh off of her bronze medal performance at the Thuringia Open in Germany last week, was seeded eight for the competition, one place below her compatriot Kelly Edwards. Giles took on Guidana Almakhanbetova from Kazakhstan in her opening fight. Early pressure paid off from Giles as she repeatedly forced her opponent to fend off her attacks and as a consequence left the mat several times, resulting in two shidos. Almakhanbetova began to launch ground attacks on Giles but she defended well and launched her counter attack. This again forced her opponent off of the mat and resulted in a third shido, and the end of the contest.

Kelly Edwards (-52kg), who was on her return from an ankle injury sustained at the training camp after the Paris Grand Slam, came up against Nazakat Azizova from Azerbaijan. The two had not met previously before in competition before today and it was Edwards who took the initiative in the opening stages of the contest. She immediately had Azizova on the mat as she scored an early waza-ari, though that was taken off by the table officials, and looked to find a way through her defence. Edwards was close to throwing her opponent a number of times only to be blocked at the last. She eventually managed to secure victory via ippon after effective transition into newaza saw her claim the win.

The draw wasn’t kind to Giles and Edwards in the second round however as they came up against the Second and First seeds respectively. Giles had to contend with World No.2 and top seeded Erika Miranda from Brazil. Miranda showed her experience that has seen her scoop a number of world medals throughout her career and she demonstrated this throughout as she scored with a waza-ari with a minute remaining and was able to watch the clock down and defend against Giles to secure the win. Edwards came up against Reka Pupp, who was a silver medalist at this year’s Baku Grand Slam. The contest went all the way to golden score but saw Edwards thrown by Pupp for waza-ari.

Both Edwards and Giles were defeated in the repechage finals by Darya Skrypnik (BLR) and Joana Ramos (POR) respectively meaning that they both finished the day in seventh place to leave the British team medal-less on the opening day of the Tbilisi Grand Prix.

Neil MacDonald (-60kg) was the first Brit onto the mat for the competition against Sahib Asgarov from Azerbaijan. The Scottish 19 year old was making his Grand Prix debut, making the step up from junior level at which he is ranked World No.1. The opening exchanges were a close affair with MacDonald showing the attacking flair which has made him such an exciting fighter to watch. An opening two minutes saw each judoka awarded a shido. The fight eventually went to Golden Score and as MacDonald leaned in to attack, Asgarov was able to counter and throw MacDonald for ippon.

Immediately following, Sam Hall (-66kg) stepped onto the mat looking to make an impression on a World tournament. He came up against Lithuanian Andrej Klockov, an opponent that Hall is familiar with having beaten him in the repechage at the Tallinn European Open back in September 2016 on his way to fifth place. Hall almost caught his opponent in newaza in the opening exchange but Klockov responded well and put in a nice drop attack to throw Hall for ippon.

Kimberley Renicks (-48kg) met World No.18 Steffanie-Arissa Koyama from Brazil in her opening round match. The 21 year old Koyama maybe young, but seeded No.4 in Tbilisi, she is a Gold medal winner in the recent Baku Grand Slam at this weight. Whilst leading by a wazari, Koyama was able to follow it up with effective newaza to keep Renicks in a hold and end the contest and Renicks involvement in the tournament.

Watch all the action live on ippon.tv from 0800 GMT and follow @BritishJudo on Twitter for live updates on British competitors.

Fifth Place for Smythe-Davis and Livesey in Tbilisi Scroll to top
Select the fields to be shown. Others will be hidden. Drag and drop to rearrange the order.
Click outside to hide the compare bar
Compare