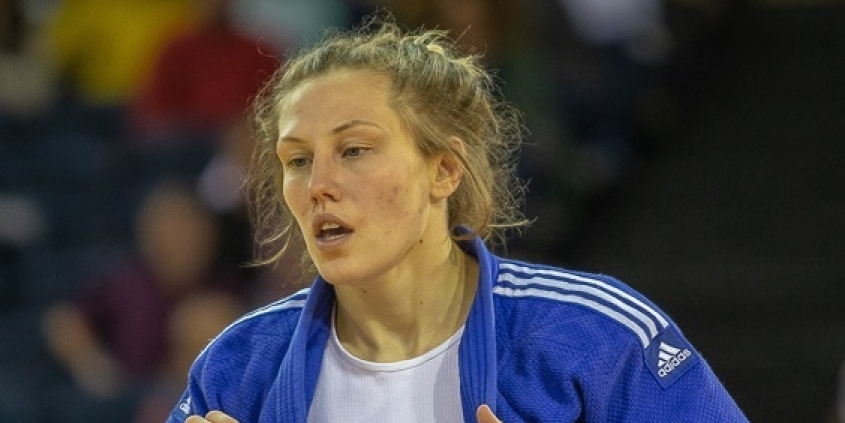 On the final day of the Hungary Grand Slam in Budapest, Emma Reid finished 5th in the -78kg category.

Competing in her first international competition since the European Judo Championships in Sofia, Emma Reid was first drawn against Italian judoka Giorgia Stangherlin. The contests went the distance, and Reid managed to take the win a dominating waza-ari.

Booking her place in the round, Reid was next up against Eiraima Silvestre from the Dominican Republic, the judoka who had earlier defeated Natalie Powell in her Pool B R1 contest. Once again, it was a lengthy contest for Reid, but the victory fell in her opponent’s favour when Silvestre threw Reid for ippon. Defeat in the quarter-finals for Reid meant it was a repechage round next where she faced Kaliema Antomarchi (CUB).

Reid battled the round and didn’t give Antomarchi an easy contest scoring two strong waza-aris for ippon, taking the win in the repechage round. Fighting for bronze, Reid was up against Brazillian judoka Mayra Aguiar. Reid made a good start but it was Aguiar that had the stronger hand-throwing Reid for ippon and taking the bronze medal.

Also competing in the -78kg category for GB women was Natalie Powell. She was first up against Eiraima Silvestre (DOM) in her R1 contest. Powell showed her power in the contest, but Silvestre saw an opportunity and threw Powell for ippon eliminating her out of the competition.

Jamal Petgrave who was competing in the -90kg category was up against Chinese judoka Qi Han in his first-round contest. Petgrave took the contest past the distance into golden score time. After 2 minutes 37 seconds of golden score time, Petgrave broke through and threw Han for ippon. Petgrave progressed to the second round but didn’t get past Mammadali Mehdiyev after Petgrave was handed three shidos, subsequently awarding Mehdiyev the win.

Rhys Thompson who was competing in the -100kg category was drawn against Peter Paltchik in the first round. Depsite fighting for the whole contest time, it was a short competition for Thompson after his opponent Paltchik took the win after a waza-ari point.

Rowena Birch Opens Sankaikuni Judo Scroll to top
Select the fields to be shown. Others will be hidden. Drag and drop to rearrange the order.
Click outside to hide the compare bar
Compare