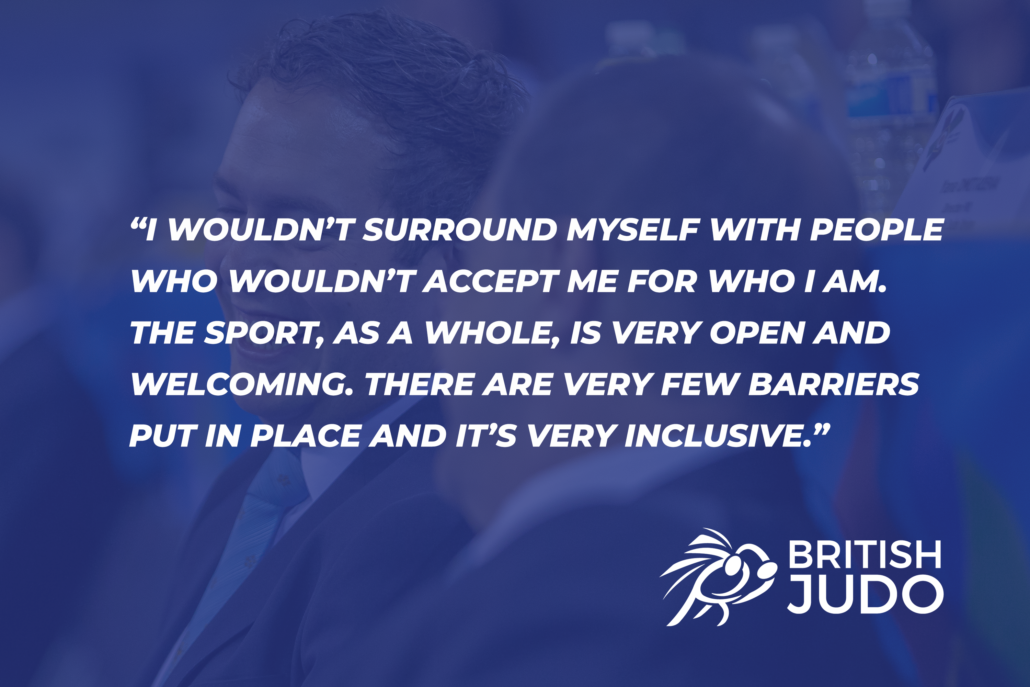 It was family that got me into judo. Me and my three brothers were taken to judo when I was about eight years old. We started at our local club and haven’t stopped.

I like that the sport is like a big judo family. Everyone looks after each other and it’s very welcoming and open.

There wasn’t much of a reaction from my family members when I came out. I think they already knew! It wasn’t a big surprise and it wasn’t a big deal.

My sexuality is not that big a part of my life, it’s just one aspect of my life. There’s so much more to me than my sexuality.

I don’t know when or how many people in judo know about my sexuality. This blog might be how they find out!

To be perfectly honest, I don’t know, and I don’t care.

That positive reaction is probably down to a mix of the people I know and the culture and values of the sport.

I wouldn’t surround myself with people who wouldn’t accept me for who I am but also the sport, as a whole, is very open and welcoming. There are very few barriers put in place and it’s very inclusive.

Alongside my role at British Judo, I am also an international referee. Some referees on the circuit know and others don’t. Again, this blog might be one way in which they do find out, but it doesn’t really bother me if they do.

However, refereeing is quite judgemental by its nature and our job is to judge. Internationally there are cultural differences and different values in different countries. I am careful, depending on where I go, about how obvious I am with people.

I don’t know if it bothers me or not but it’s just a fact of life right now. Not every country is as open as we are.

I did question before agreeing to do this blog whether I wanted anything going out on the internet or to the wider public that could jeopardise my future career as a referee especially if it meant being judged for who I am and who I love.

What changed? I think it’s important to be honest and to be open. If people judge, then let them judge.

Am I worried about negative backlash once this comes out? Yes and no.

No, not specifically about this.

If it does affect the way people feel, then obviously it does worry me, but I think I’ll be judged more for my ability to referee than for being gay. And if there is any negativity then there’s not much I can do about it.

I think it’s hugely important that there are allies for the LGBT community.

For example, there’s inappropriate language used throughout society in normal daily life that’s considered acceptable by a lot of people that I don’t think is acceptable.

However, having other people, that aren’t necessarily gay, challenge that language and any negative actions would make things a lot better.

I’m more comfortable in myself and on the whole, I feel it is becoming less acceptable to use that sort of language. Whether that’s because I’m surrounded by older and more mature people now I just don’t know.

I don’t know what kids of today are saying but I see lot more young people coming out more often so that shows it’s becoming less acceptable to use gay in a negative and derogatory sense.

I feel a lot happier being open and honest with myself and that’s probably the hardest thing to do.

It takes a lot of courage but it’s a relief once you’re able to live honestly.

Junior and Senior national titles to be decided in Sheffield Scroll to top
Select the fields to be shown. Others will be hidden. Drag and drop to rearrange the order.
Click outside to hide the compare bar
Compare