You are here: Home / Association news / Q & A – In Conversation with Eleanor Cantwell (Performance Welfare... 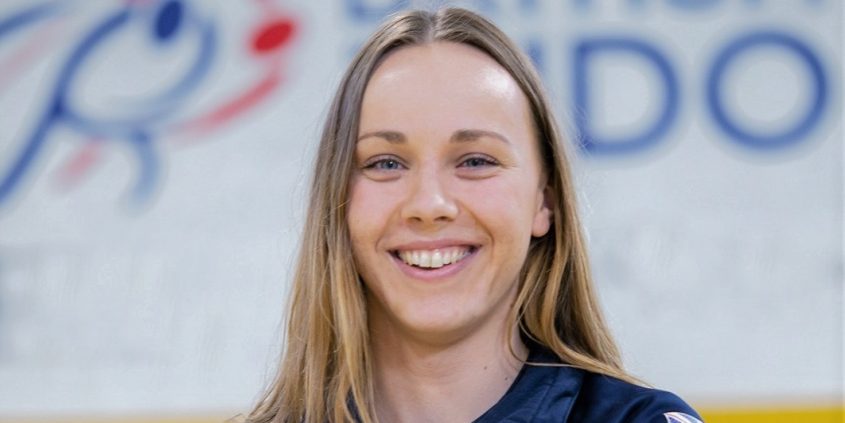 We recently sat down with British Judo’s Performance Welfare Officer, Eleanor Cantwell, to talk about her role on the World Class Performance Programme (WCPP).

Just to start things off, can you tell us a bit about your role at British Judo?

I’ve been at British Judo now for 18 months and this was a new role for British Judo as well as for me so it’s still very much evolving. Day to day, I’m based at the British Judo Centre of Excellence in Walsall and work mainly with the World Class Performance Programme athletes and the wider Performance team. However, the role is by no means exclusive to the Centre of Excellence or to the WCPP athletes and I am also involved in work happening across the performance pathway too.

To carry out my role, I need to work closely with other performance staff, particularly the sport science and medicine team. However, where my role is different is that my line management comes from outside Performance. This gives my role a degree of independence meaning that athletes can discuss matters with me confidentially without fear of consequence and safe in the knowledge that information won’t just get fed back to those making decisions relating to funding and selection. The need for this has been highlighted as something really important in reviews that have happened in other sports within the high-performance system.

The idea is that I’m the first point of contact in that kind of situation. The athletes all know there’s someone to speak to if there’s anything wrong or they’re worried about someone else. Likewise, staff can speak to me if they’re worried about an athlete but maybe don’t feel they’re in the right position to approach them.

What follows will depend on what’s right in that situation but may involve helping facilitate a discussion around the arising issues, working to get the right support in place for an athlete, helping an athlete to get a referral outside of the sport or passing on the matter to the safeguarding manager. However, sometimes just having a chat with someone impartial that you know will be confidential is all that is needed.

This element of the role comes under the reactive side of responsibilities and is probably quite similar to the role of a ‘traditional’ welfare officer, which hopefully those operating within club environments will be familiar with.

Unlike club welfare officers, who do fantastic work despite often being in the role voluntarily and often being under resourced, I am in the fortunate position of being based at the Centre full-time. This means that I can also work quite proactively with the athletes and staff, aiming to reduce the number of situations requiring reactive support and action.

Being at the Centre everyday means I can build good relationships with the athletes and am able to do things like deliver education on subjects such as anti-doping, wellbeing and mental health.

Considering the nature of your role, how important was it to build a good relationship with the athletes?

It was hugely important to establish a good relationship with the athletes from the outset because in a situation where you do need to talk to someone, you’re unlikely to go to someone you don’t know, don’t trust and have no experience of working with.

When it does come to those times where things feel like they are going wrong or you need to speak to someone, you’re naturally going to go to the person you feel you can talk to without judgement, who is able to listen and who you’ve got a good relationship with.

How closely do you work with the other members of the SSSM team?

I am fortunate that while I have some degree of independence, I don’t work completely on my own. The SSSM team are really close knit in judo and that’s helped us work well together, in particular when supporting athletes with any issues.

It might be the case that the Lifestyle Advisor and I are identified as the people for athletes to speak to if an issue has come up. However, if that athlete discloses something to the physio, as is often the case in sport, because they have a strong relationship after rehabbing from a long-term injury for example, then that’s great. In other cases that might be the S&C Coach or our Nutritionist but the main thing is that the athlete is speaking to someone, that’s what’s important.

Have you faced any challenges since starting the role?

I think one of the main challenges I feel I have faced, and this is just my perception of course, was the feeling that my role and area of work would ‘take away’ from the performance side of things. I’ve heard the word ‘soft’ being used (outside of judo) when considering athlete’s wellbeing as well as their performance and it just isn’t the case. The two go hand in hand, and an athlete experiencing a positive state of wellbeing is only going to more likely to perform to their ability and be able to cope with the demands of training and competition.

I imagine though that there was still some resistance to this sort of approach?

I think there can be but things like checking in each morning on measures including ‘perceived stress’ and ‘how are you coping?’ and delivering things like wellbeing education is not going to take away from the athletes going out and performing.

If an athlete feels positively about all aspects in their life, then surely that’s only going to make the medals or the goals more achievable?

We know they want to do that (perform). They wouldn’t be here if they didn’t want to. High performance sport can be unforgiving, so you wouldn’t stick at it unless your heart is really in it. It’s important to help the athletes develop the right skills to cope with an environment that can feel very pressurised and place a lot of demands of them at times.

Positive mental health is very much in the public consciousness, not only within sport but in wider society too. How easy it for athletes to be open about their mental health?

When it comes to mental health and wellbeing I think it’s relatively easy to do something like a workshop because it’s with a group and we’re not talking about anything specific. We’re talking about finding balance, the importance of support networks and why having time out is important. I have found that the athletes are pretty engaged in these kinds of conversations.

The harder part, I think, is when they’re not feeling great, and that feeling doesn’t feel like it’s going away anywhere. How do you actually bring yourself to sit down and talk to someone?

It comes easier to some people than others. For some people they need to build that relationship before they can do that, and others may still struggle even then.

Again, if I’m not that person they build a relationship with, then that isn’t a huge concern for me. I just want to make sure they do have someone they can go to.

It doesn’t need to be in judo. I have that degree of independence but I’m still in the sport, so people might find it easier to go to someone who knows nothing about judo.

I think sometimes the other person may as well not be there. It’s just you getting things off your own mind so you can figure out what you’re going to do about it. They could input pretty much nothing, but you probably wouldn’t have this chat to a wall! I feel like you need to do it with another person but a lot of the time it’s simply getting stuff off your mind that helps.

It does come down to the individual, some people are just able to talk a bit more openly than others but that doesn’t necessarily mean they’re going to be able to cope with things better.

So, it’s very much an individual thing?

Definitely, and it’s really important that to find something that works for you, talking is just one outlet. It’s the time out bit that’s important. It’s not necessarily time out to talk. It’s time out to do whatever helps you.

For me as an example, exercise is a huge one but for these guys they are training every day so the last thing many of them want to do when they’re feeling stressed is more exercise! It’s often just a case of having a conversation with the athlete and suggesting other options they can think about.

I also think it helps knowing what triggers you have. For example, if you’re aware that you don’t do well when you’ve had a bad night’s sleep then you know that this is going to be a tough day but you also know what you need to do to get through the day and that there’s a reward or timeout planned in. It’s like a book of tricks, and you probably need a couple of different options because on some days that first option just isn’t going to work for you.

Successful Day at Western Area Development Event Scroll to top
Select the fields to be shown. Others will be hidden. Drag and drop to rearrange the order.
Click outside to hide the compare bar
Compare