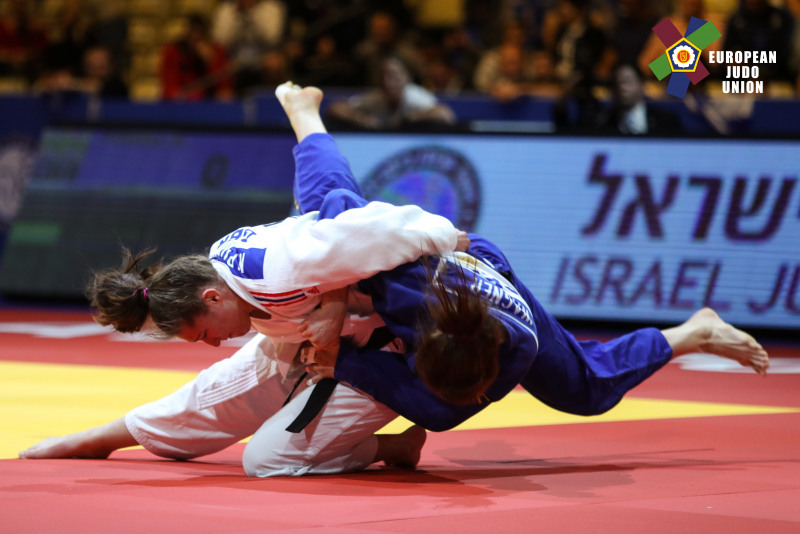 Natalie Powell ensured that GB Judo finished the 2018 European Judo Championships on a high as she won bronze on Saturday 28 April in Tel Aviv, Israel.

This was Powell’s third consecutive European medal following bronze in 2016 and 2017. It also meant that GB finished with five medals in total, its biggest medal haul at a European Judo Championship since 1998.

GB’s five medal also meant that only Russia with eight had won more medals at these Europeans. France also won five, however, three of those medals were gold.

Powell went in as top seed and took on Hungary’s Evelin Salanki in the first round. Salanki made the more dynamic start but the Irfon judoka took her chances well to counter two of the Hungarian’s throws for waza-ari.

Moving into the quarter-finals Powell faced off against Anna Maria Wagner of Germany. The eighth seed went ahead in the opening minute as she rolled Powell for waza-ari.

The British judoka responded well to that early setback though as she immediately went on the attack. The pressure eventually told as she threw Wagner for waza-ari to level things up on the scoreboard.

The contest always felt like it would finish before time and that proved to be the case as with just over a minute to go Powell countered Wagner’s attack and went straight into osaekomi to finish the fight.

French judoka Madeleine Malonga was next up in the semi-finals and the British judoka never had a chance to get into the contest.

Malonga immediately took a dominant grip and threw Powell for waza-ari and went straight into osaekomi to complete the win.

This dropped Powell into the bronze medal contest against Portugal’s Yahima Ramirez. The British judoka had never lost to her Portuguese opponent and it proved to be a very tactical contest.

After an early scare Powell consistently got the better of the gripping exchanges and her power and stamina told as she forced Ramirez to pick up three shidos.

Frazer Chamberlain and Jamal Petgrave both exited in the second round at -90kg following tough fights.

However, as the contest went on it was Chamberlain’s power that told as he forced Kaljulaid into mistakes resulting in two shidos for the Estonian fighter.

The British fighter appeared to have taken a decisive lead in the final minute as he countered Kaljulaid’s attack but the waza-ari score was eventually taken off.

The contest went into golden score where Kaljulaid took the win as he spotted an opportunity to use a bit of ashi-waza to throw Chamberlain for waza-ari.

Petgrave was making his Senior Europeans debut and he took on WRL 2 Beka Gviniashvili (GEO). The Westcroft judoka made a solid start as a couple of good attacks almost yielded a score but it was the Georgian who took the waza-ari lead.

With just over a minute left Petgrave went for a big attack but Gviniashvili showed his power to take the British fighter back from ippon.

Obituary: John Ritchie Scroll to top
Select the fields to be shown. Others will be hidden. Drag and drop to rearrange the order.
Click outside to hide the compare bar
Compare