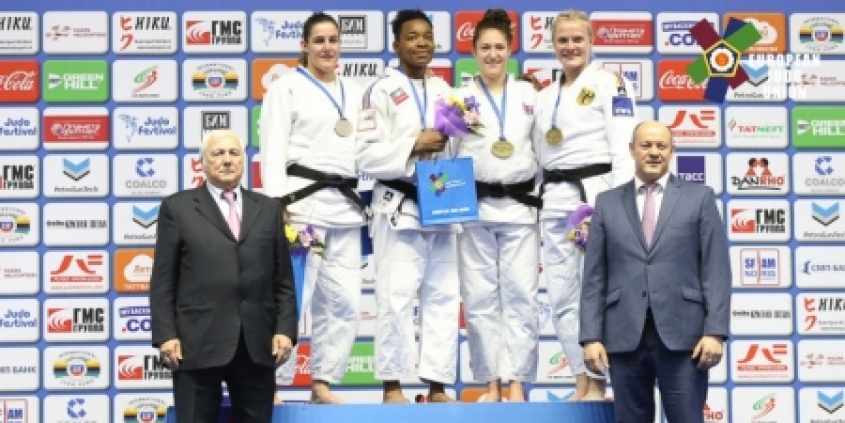 Natalie Powell took a big step on the road to Rio Olympic Games as she came away with bronze on the final day of individual competition at the 2016 European Judo Championships on Saturday 23 April in Kazan, Russia.

Powell had to face fellow British -78kg judoka Gemma Gibbons for bronze with both having had to beat a top ten rival earlier in the day. When the two had last fought at the Paris Grand Slam Powell had won a tight contest on shidos however this time she pulled off a big throw to take the contest by ippon and secure Britain’s second medal of the championships after Colin Oates’ -66kg silver on Thursday.

Powell had looked in good form early on as two waza-ari in quick succession against Croatia’s Ivana Maranic gave her the win. Her quarter-final saw her take on Anamari Velensek (SLO) and Powell put in a strong controlled performance as a waza-ari put her through to the semi-finals.

There she faced Guusje Steenhuis (NED) whom Powell had already beaten twice this year however the World No.4 scored a waza-ari and then held off a late surge from Powell setting up the British judoka’s bronze match with Gibbons.

“I’m so happy! I came into these European Championships fitter and stronger than I have ever been. My aim was to win the Europeans but I am happy with bronze. I am really happy!”

Gibbons had ground out a tough first contest with Victoriia Turks (UKR) on shido before losing her quarter-final with Audrey Tcheumeo (FRA) as the French judoka produced a big ippon scoring throw.

Gibbons recovered well and in the repechage she pulled a big result against Marhinde Verkerk (NED) as she threw her opponent for waza-ari in the final minute of a close contest.

Ben Fletcher had his best day at senior major championships to date finishing seventh in the -100kg category. After a solid win by yuko over Jakub Wojcik (POL) Fletcher took on 2013 World Champion Elkhan Mammadov (AZE) and in a contest that went the full distance and more.

After Fletcher just missed out on a score in the final minute it came down to golden score where the British judoka produced a lovely bit of judo to throw the visibly tiring Mammadov for ippon.

His quarter-final saw him take on Grigori Minaskin (EST) and while the British judoka was arguably in control a slight mistake saw the Estonian hold Fletcher for ippon on the ground and take the win. This dropped Fletcher into the repechage where he took on Michael Korrel (NED) and in a shido heavy contest Fletcher was penalised early and from there the Dutch judoka did enough to ensure he came out on top by three shidos to two.

Frazer Chamberlain (-90kg) made an impressive start against Peter Zilka (SLO) as he threw his opponent for yuko before producing a big ippon throw to take the contest. However his next opponent Karolis Bauza (LTU) proved too strong throwing Chamberlain for waza-ari twice.

Sarah Adlington (+78kg) and Andy Burns (-90kg) were also in action however both lost in the first round on shidos.

Elite Performance coach Kate Howey MBE was pleased with overall performances of the team throughout the competition:

“There have been some good performances today with Ben’s seventh and Gemma and Natalie fighting for bronze and Natalie winning her first European medal.

“I said before the tournament we wanted the players to perform the best that they could and throughout the whole championships the players have performed and the results have come.

“This is the best set of results since 2006 which is good in Olympic year.”

Fifth for Conway at European Championships

British Judo announces exciting new partnership with A-Plan Scroll to top
Select the fields to be shown. Others will be hidden. Drag and drop to rearrange the order.
Click outside to hide the compare bar
Compare