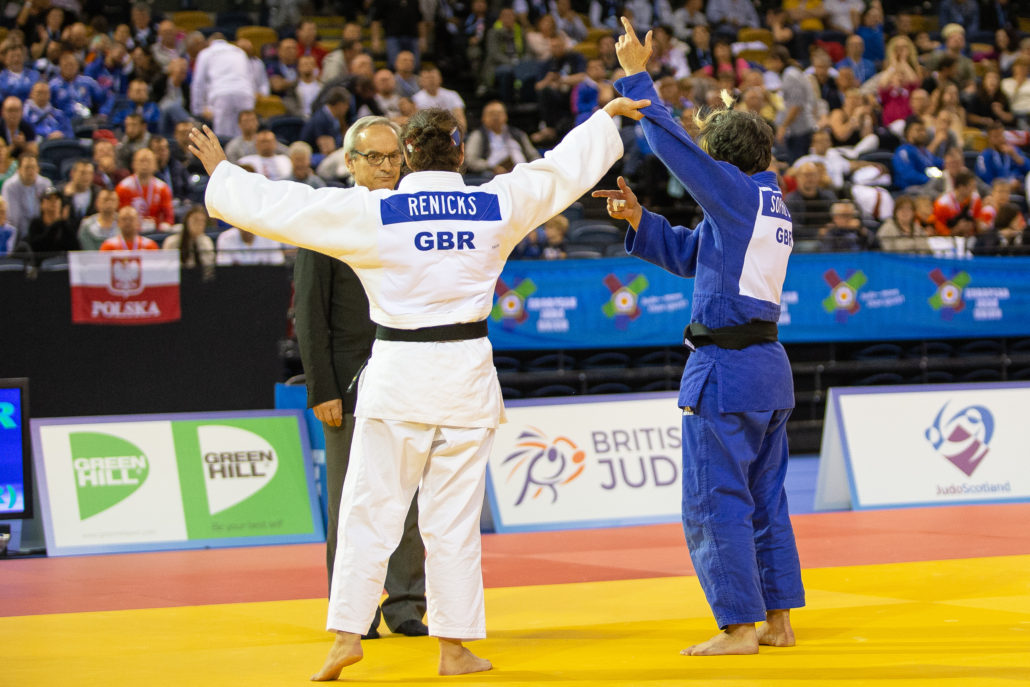 It proved to be a memorable day at the Emirates Arena, Glasgow as the GB Judo Masters team more than doubled their medal tally to 49 on Saturday 16 June.

GB won a total of nine gold medals on day three with a number of memorable performances throughout the day.

At F6 -63kg Joyce Malley underlined her class at this level as she retained her European title. The current BJA Female Masters Player of the Year started her day with ippon wins over Delphine Philbert (FRA) and fellow Brit Dianne White.

She followed that up with waza-ari awasete ippon victories over Nadia Cocco (ITA) and Christine Peuch (FRA). 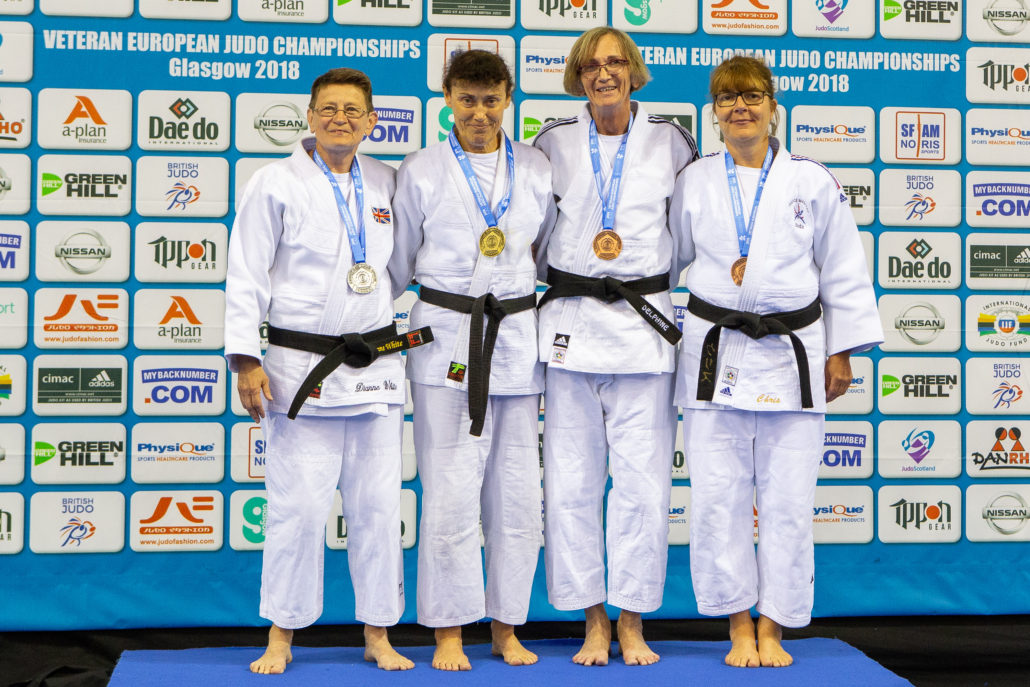 While Malley’s class came through in the end, she admitted that it was touch and go as to whether or not she’d make it to Glasgow.

“One, I’m very pleased and secondly, I’m very relieved because I actually broke some ribs in April and I didn’t decide, although I’d entered, to actually compete until the Thursday because my consultant advised me to leave it until the last minute to make a decision.”

Understandably, that injury not only affected her preparation but also her judo on the day:

“Usually for judo, I do lots of judo. I wasn’t able to do that. I was confined to doing anaerobic stuff that did not cause my body a problem.

“I had to change my judo, I wasn’t as fit as usual so I had to confine myself to less attacking and I had to use different techniques. That was challenge for me.”

There was a memorable gold win for Andrew Malone as the M2 -73kg judoka had to grind out the wins in front of a vocal home crowd support.

Waza-aris were enough to see off the challenge of Frederic Alinhac (FRA) and Ruben Gonzalez Herraez before he showed his contest management ability to force Zulfugar Huseynov (AZE) to pick up three shidos, despite being a waza-ari down. 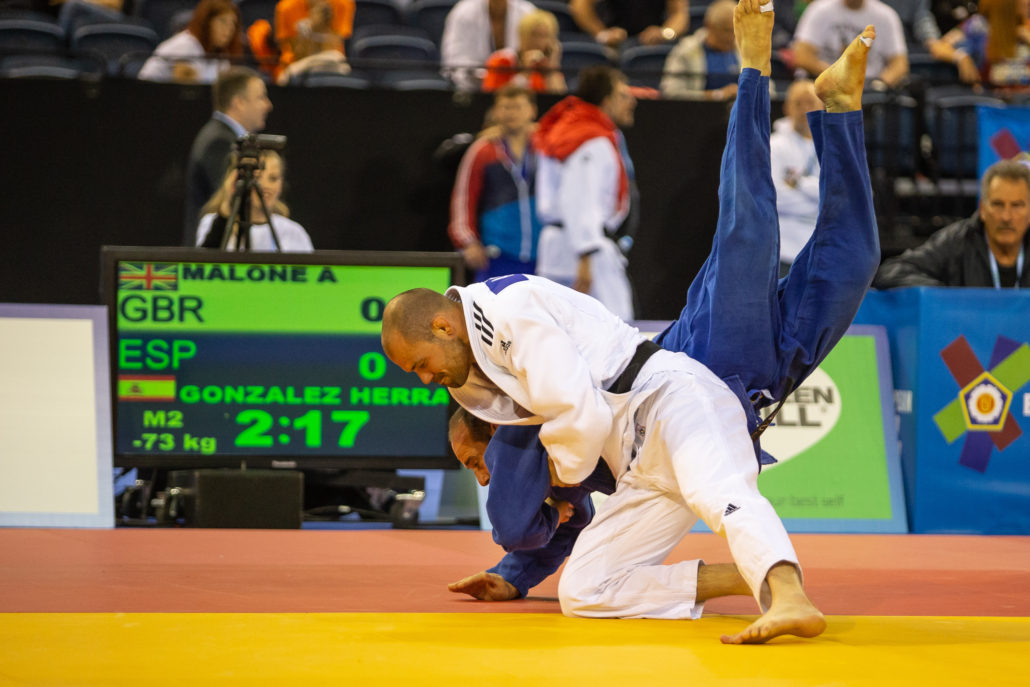 Malone went on to beat fellow GB judoka Stevey Barteluk in the semi-finals with a waza-ari score in golden score booking his place in the final.

The final against Yann Talamo (FRA) was another tough and physical contest for Malone and once again it went to golden score. In the end it was the British judoka’s superior tactical ability that won out as he forced Talamo to pick up three shidos.

Speaking afterwards, Malone spoke about how he had to overcome his nerves at the start of the day:

“At the beginning of the day I was quite nervous. It’s a great setup and when you walk through that tunnel it’s very daunting to start with especially when you’ve not been competing at this level for a long time but it was fantastic. As the day went on my nerves settled and I felt more in the fights as we went along.”

Malone not only benefited from support in the crowd but also from back home:

“I’ve got the family here and all the clubmates, the kids and parents have all come to support me. People watching it that can’t make it today as well were all sending me well wishes on the messages so it’s been great support today.”

There were another magnificent seven GB gold medallists today. Emma Burnett (F1 -57kg) responded well to an early defeat to win what was effectively the gold medal contest against France’s Jamila Ben Salah.

Sophie Cox (F2 -57kg) won an all-GB final against Louise Renicks as she held down the Glasgow 2014 gold medallist for waza-ari in golden score. This was Renicks’ first competitive appearance since 2015.

Debra Small (F5 -48kg) made short work of three of her four opponents on the day before getting the better of Rosanna Dell Accio (ITA) in a tight last contest. Sarah Hopkins was in similarly impressive form at F5 -70kg with two ippon wins from her four contests.

There were three +78kg gold medals also with Simone Callander (F3), Kerry Tansey (F4) and Lesley Reid (F6) powering through their weight categories with multiple ippons wins between them.

The fourth and final day of the 2018 Veteran Europeans will be the turn of the team event with a record 51 teams entered in total. Competition starts at 0930 UK time with live coverage via britishjudo.org.uk and eju.net. Follow @BritishJudo on Twitter for GB highlights throughout the day.

Four medals for GB Judo at Veteran European Teams Scroll to top
Select the fields to be shown. Others will be hidden. Drag and drop to rearrange the order.
Click outside to hide the compare bar
Compare