The Dan Grades system is a distinctive feature of judo with promotion to different ranks based on a variety of different pathways and achievements.

Obtaining a Dan Grade is one of the highest qualifications available to individuals involved in the sport of judo.

Who are the Dan Grades for?

The Dan Grade system is aimed judoka who are 15 years of age and older who have moved on from completing the Kyu Grades system.

How does the Dan Grade System work?

Judoka test their ability, by entering for an examination within the Dan Grade system. For that examination players are required to demonstrate superiority over a cross-section of other players competing at the same level. This ensures that successive Dan Grades up to 5th Dan are populated by increasingly skilful players.

For grades higher than 5th Dan judoka wishing to move up a grade must apply to British Judo. A decision is then made on their application by the British Judo Board of Directors.

For more information the policies and procedures for the Dan Grade system click here.

What are the belts in the Dan Grade system?

There are 10 different grades contained within the Grades system, which represented by 3 different coloured belts. 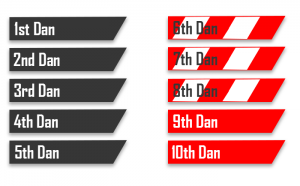 The online list will be hosted through The Dojo, accessible via the home page. Head over to www.bjadojo.co.uk and click on “Dan Grade Register” in the top right hand corner. You do not need to be logged in to the system to access the register.

Lapsed members who hold a BJA Dan Grade will continue to have their grades registered offline but will not appear on the Dan Grade Register.

Should they wish to be placed on the online register, they will be required to hold a British Judo Association membership – the minimum required level being a Recreational membership, priced at just £15.00. Members of JudoScotland, Welsh Judo Association and NI Judo Federation will have separate links in order to access the register shortly.

You are able to search the register by name, club or area.

Scroll to top
Select the fields to be shown. Others will be hidden. Drag and drop to rearrange the order.
Click outside to hide the compare bar
Compare