In 2019, British Judo will launch the GB Judo Elite Development Squad programme as we start to look forward in identifying and developing potential athletes for Paris 2024 and Beyond.

The GB Judo Elite Development Squad will be aimed at current GB Junior Squad athletes who will be profiled and benchmarked up to four times per year, where a number of athletes will be selected for the Elite Development Squad that will entail in attending domestic training camps at the British Judo Centre of Excellence and identified Junior European Cups and training camps. Additionally, when and where appropriate, identified GB Junior EDS athletes will attend various training camps with the Senior Team on the WCPP as part of their long-term development into Senior Judo.

The first Athlete Profiling day will take place at the British Judo Centre of Excellence on the 2 and 3 February, that will include a number of physical assessments and mat based technical and tactical assessments. Post profiling weekend, British Judo will identify a number of athletes for the GB Junior Elite Development Squad who will attend their first domestic training camp on the 18 – 23 February.

All GB Junior Squad athletes have already received their calling notice for the first Profiling weekend.

The GB Junior Elite Development Squad programme will include up to 6 domestic camps per year, plus a number of Junior European Cups and training camps. The domestic training camps will provide opportunity for high quality Randori, physical development and the delivery of educational workshops around nutrition, psychology, lifestyle and career planning. Additionally, guest coaches will also be in attendance to further support the long-term development of athletes who are deemed to have the potential for Paris 2024 and beyond. Giorgi Vazagashvili, a 2000 Sydney Olympic Bronze medallist, multi European and World medallist and former Georgian National Coach will attend the first training camp in February. 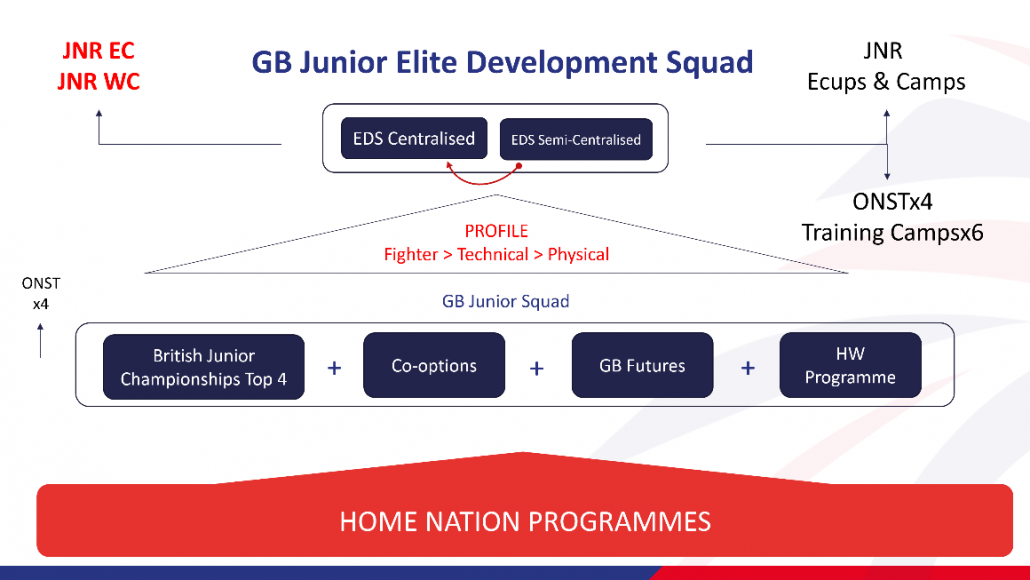 The GB Junior Elite Development Squad programme will be led by a strong coaching team of 2012 and 2016 Olympian and former European medallist Colin Oates and Elite Performance Coach Denny Roberts, who will be supported by Home Nation programme coaches, identified Club coaches as well as additional guest coaches. Tim Ellis, the GB Performance Pathway Manager will manage the EDS programme and will be the key point of contact for Athletes, Parents and Coaches.

As such the importance of the GB Junior EDS Programme, the Performance Director, Nigel Donohue, will oversee and support the Coaching and Management Team of the programme, as he looks towards building a team for Paris 2024 and beyond.

Although we are very much focussed on qualifying and preparing a team for the Tokyo 2020 Olympic and Paralympic Games, the British Judo World Class Performance Programme is in a very strong position with the now established National Training Centre – that is due to under go further development this year, with a comprehensive Coaching and Sports Science and Medicine Team, there is no doubt that this is an exciting time for GB Junior athletes as British Judo looks beyond the Tokyo Olympic and Paralympic Games and starts the planning and preparation for Paris 2024.

To note, it would still be advantageous though and when appropriate, for GB Junior EDS athletes to attend Home Nation Squad training should this complement the EDS programme.

Transition onto the WCPP (Academy programme)

The World Class Performance Programme will only consider athletes on the GB Junior EDS programme for a place on the fulltime programme (Academy programme). The nomination process by Home Nation programmes will cease after this year and identification will then be through continued assessment at EDS domestic and international training camps and performances in international competition.

Following the profiling weekend on the 2 & 3 February, the WCPP will identify up to 30 athletes for the GB Junior Elite Development Squad who will be invited to all ONST’s and the following domestic training camps:

Identification for the GB Junior Elite Development Squad will be based on the following;

There will be continued Profiling and Assessments for current EDS programme athletes and invited GB Junior Squad athletes, who may have missed the 2 & 3 Feb Profiling weekend, or we wish to reassess, at EDS Camps 3, 4 and 5.

Athletes identified for the GB Junior Elite Development Squad will be given the opportunity to compete at identified Junior European Cups and training camps. When and where appropriate athletes may be invited to additional training camps on an individual basis. However, in order to be considered for the Junior European and Junior World Championships, athletes must meet the criteria detailed in the published selection policy.

It will be expected that all GB Junior EDS athletes commit to the programme, but will accept, in exceptional circumstances with an evidence-based rationale, that athletes may not be able to attend an EDS Camp or selected international competition or training camps for various reasons that must be communicated in advance of the training camp or competition.

We will continue to communicate the progress of the GB Junior Elite Development Squad programme as and when appropriate, but should you have any questions, please don’t hesitate to contact the GB Judo Performance Pathway Manager – Tim Ellis as follows: