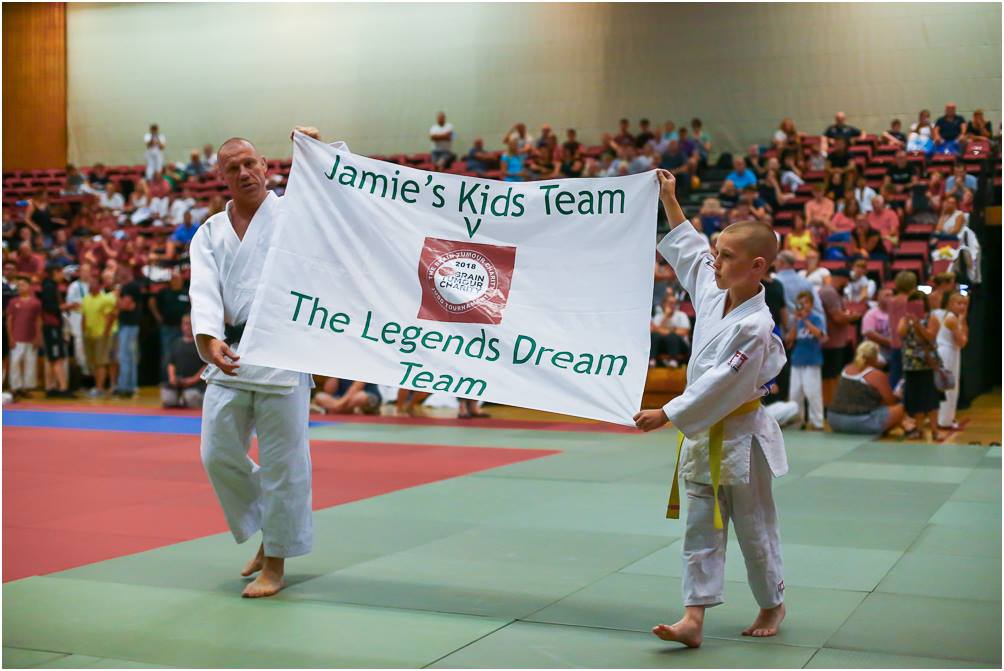 It was a memorable weekend in Wales for the 2018 Brain Tumour Charity Judo Tournament from Friday 13 to Sunday 15 July.

The event was to raise money for the Brain Tumour Charity, in memory of Welsh judoka Jamie MacDonald who passed away last year after a two year battle with cancer.

Things kicked off with an exceptional masterclass from judo legends Angelo Parisi and Brian Jacks at the Sport Wales National Centre on Friday night.

Saturday saw over 150 young judoka take part in the Kid’s Competition as well as the exciting Jamie’s Kids vs Legends match.

Despite that though, they could not get the better of Jamie’s Kids with the younger judoka winning each contest by ippon.

Huge thanks has to go to young Deryn Allen-Dyer who was the driving force behind the match. Thanks as well to Rob Mann from Swinton Judo Club who donated t-shirts for the match to Jamie’s Kids team. The match was watched on by Jamie’s mother and brother Sue and Luke.

Sunday saw the senior competitions with around about 90 judoka in action and while it was a quieter day there was still some great judo on show throughout.

“It was another amazing weekend and it’s really humbling to see how much the event has grown since last year.

“A massive thanks to everyone that supported the event over the last year and taken time out of their schedules to help out at the weekend.

“We really appreciate all of the hard work and dedication that has gone into making this event such a great success.

“I can’t wait for next year’s competition which we have renamed as the Jamie MacDonald Memorial Championship.”

The Jamie MacDonald Memorial Championship will be held on Sunday, the 31st of March 2019 and will be at The Sport Wales National Centre in Cardiff.

A Medal Winning Performance from Akrotiri Judo Club Scroll to top
Select the fields to be shown. Others will be hidden. Drag and drop to rearrange the order.
Click outside to hide the compare bar
Compare
Wishlist 0
Open wishlist page Continue shopping