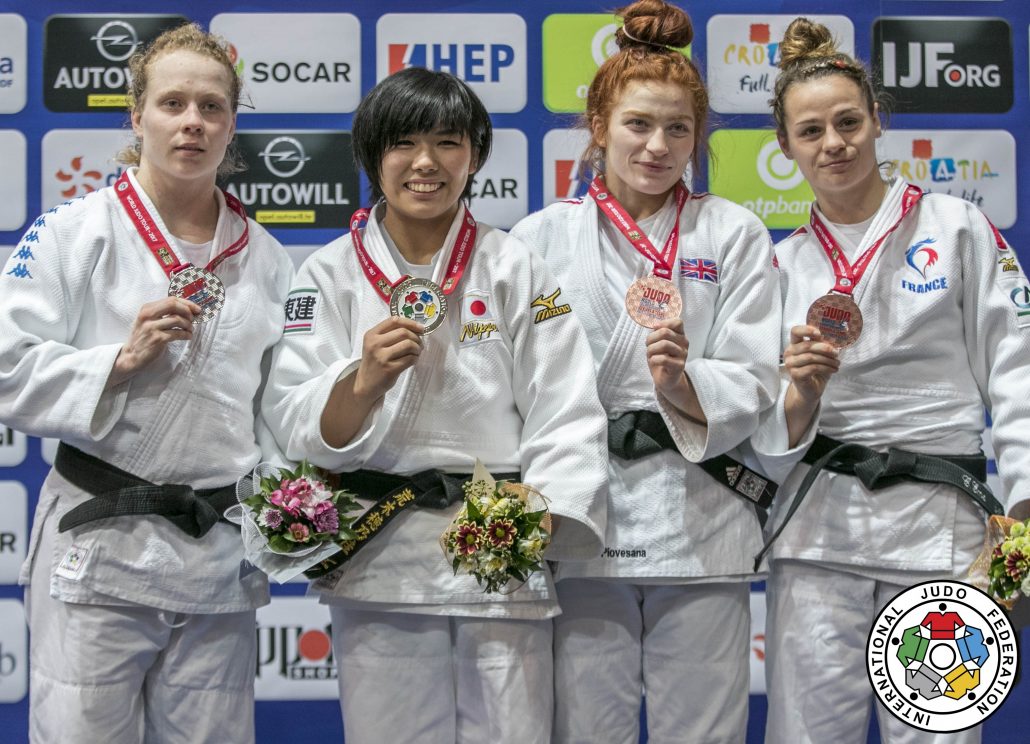 Lubjana Piovesana ended her junior career on a high with bronze at the 2017 Junior World Championships in Zagreb on Friday 20 October.

The -63kg judoka had been close to the medals at Junior championships on three occasions with fifth place finishes at the 2015 Junior Worlds and 2015 and 2017 Junior Europeans.

The Midlands judoka made a very impressive start as she beat Russia’s Mariia Gryzlova inside the opening 30 seconds. Piovesana saw her opportunity in newaza and applied top sangaku forcing Gryzlova to tap out.

Her round of 16 contest followed a similar pattern, finishing with just 49 seconds on the clock. Andjela Samardzic (BIH) was forced to ground and once again Piovesana went in for the top sangaku forcing a tap from her opponent.

Serbia’s Anja Obradovic was next up in the quarter-finals and it was a physical and tough contest with both judoka close to scoring on numerous occasions.

Eventually the contest went into golden score and off an Obradovic attack, Piovesana forced her opponent back for waza-ari with a nice bit of tewaza.

This set-up a semi-final contest with current Junior European champion Sanne Vermeer (NED). Vermeer had won a close semi-final between the two in Maribor last month and this fight was another tight affair.

With just over 90 seconds left Piovesana went ahead as she rolled Vermeer for waza-ari. The Dutch judoka came storming back and forced the British fighter to pick up two shidos for stepping out and levelled things up with a waza-ari score.

With just under 30 seconds left Vermeer took the lead with another waza-ari score and forced Piovesana to tap out in newaza.

This meant the Piovesana would fight for bronze where she faced Jovana Obradovic, sister of Anja. The British athlete had won their most recent contest in the Arad Junior European Cup in August and she made a strong start in Zagreb.

The rate of attacks started to tell as the referee gave the first shido to the Serbian for passivity before awarding a second for gripping on the same side. Obradovic came back well though and forced Piovesana into a false attack shido late on. 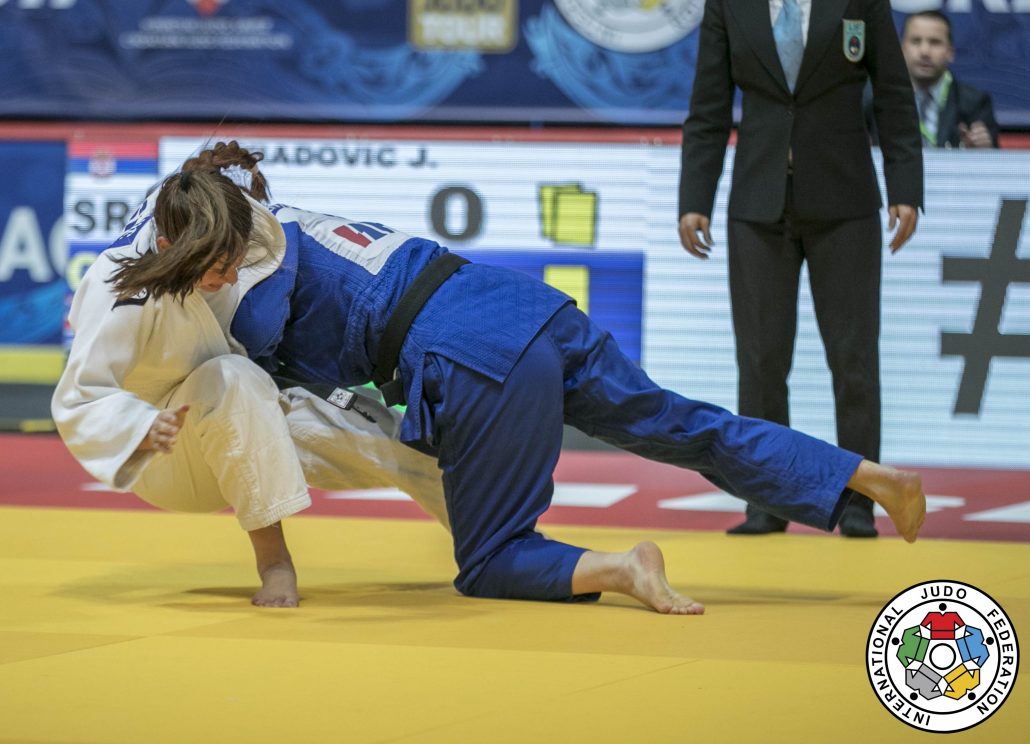 The contest went into golden score and Piovesana was straight on the attack with a couple of close scores. After a third straight attack with no reply the referee gave the final shido to Obradovic securing a well deserved bronze medal for the British fighter.

“I’m really happy with the day, how I picked myself up after losing and from having three fifths at major competitions. To end my junior career with a bronze at the Worlds was really special!”

“I couldn’t be happier for her. She has had either the pressure of being Junior World No.1, or the No.1 seed, for the most part of the last two years; a level of expectation after winning two Grand Prix medals & to deal with the disappointment of finishing fifth in her last three championships.

“To pick herself up after the semi-final & win the bronze showed character & courage. This is the first time she has done this & bodes well for the future.”

McWatt, in only his fourth competition back from injury, made a solid start as he saw off the challenge of Razvan Ciolan (ROU) with two waza-ari scores seeing him into the second round.

Georgia’s Tristani Mosakhlishvili had made short work of his first contest and it was a typically physical match in the second round.

McWatt took the lead with a nice waza-ari as he showed good determination off a drop attack. The Georgian levelled things up off the next exchange though and the fight would go into golden score.

Off the first exchange of golden score, McWatt transitioned well into newaza off an attack and held down Mosakhlishvili for ippon to move into the round of 16. 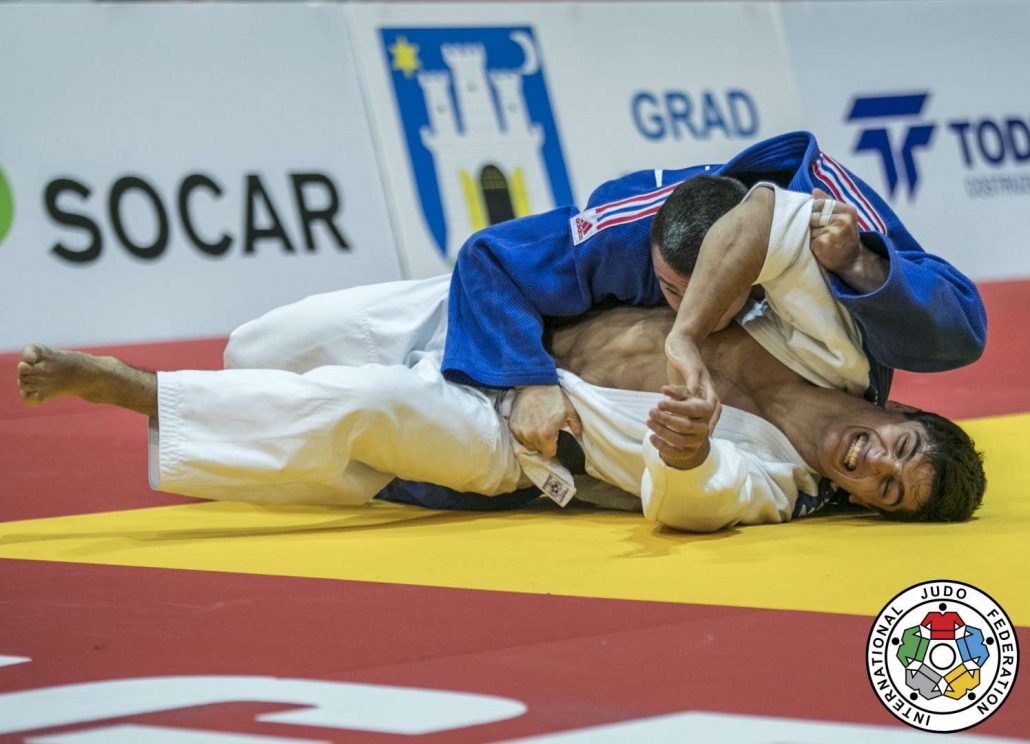 Dutch judoka Jesper Smink had won bronze at the Junior European Championships and he proved to be a suitably awkward customer for the British judoka. McWatt went ahead by waza-ari after the first exchange though and would double that lead with two minutes left.

Smink though wasn’t going away in a hurry and he continued to press McWatt and got a score back late on. The British judoka did enough to hold him off though and moved into the quarter-finals.

The quarter-final with Junior European champion Tim Gramkow (GER) came off the back of a short turn around. After an even start the German seemed to get stronger as the contest continued.

In the final minute, it was Gramkow who went ahead by waza-ari and he followed up well on the ground to apply the strange, forcing McWatt to tap.

The Garioch judoka responded well though against Italy’s Salvatore D’Arco and he controlled their repechage final well, winning by three waza-ari.

Italy’s Junior European bronze medallist Christian Parlati was looking to add a Junior World medal to his collection and the tall Italian was another tricky opponent for McWatt.

Parlati picked up a shido as good pressure forced a false attack. With a minute left though he took McWatt back for waza-ari as the British judoka looked for the big attack. The Italian then showed good contest management to hold off McWatt’s late push for a score.

“Stuart has demonstrated incredible mental toughness, resilience & determination to come back from back-to-back ACL reconstructions and delivery the performance he did today.

“Stuart followed his outstanding performance at the European Teams with another today. He has not only come back from injury physically better, but technically better too. I am excited to see what the future holds for Stuart as a senior athlete.”

Westcroft’s Jamal Petgrave went into this year’s Junior World Championships as one of the top seeds after a great 2017 including bronze at the Junior Europeans last month.

The British judoka had a bye into the second round where he faced Youngchan Park (KOR). The Korean took the lead at the two minute mark, rolling Petgrave for waza-ari but the British fighter responded well to level things up with a nice uchi-mata. 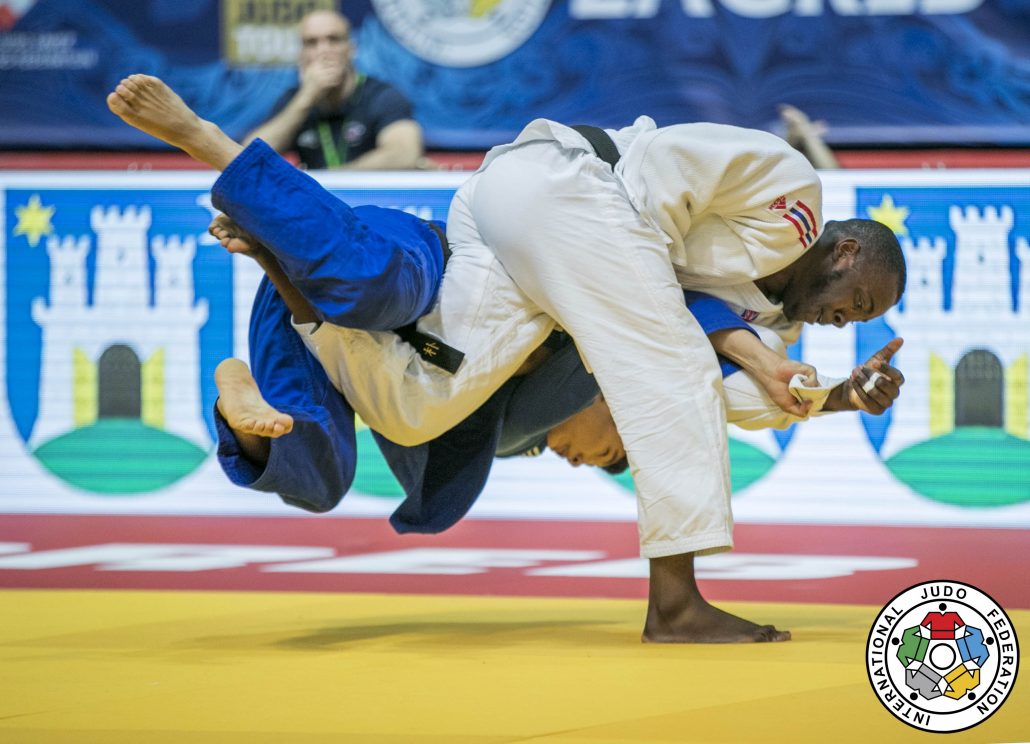 The contest went into golden score and Petgrave made sure of the result with a lovely ko-uchi giving him the ippon score.

Another golden score contest followed in the round of 16 against Algeria’s Oussama Ramdane Temri. Neither judoka could be separated in regular time with a shido each the only change to the scoreboard.

Petgrave took control of the contest in golden score though and secured his quarter-final spot as he rolled Temri for waza-ari.

His quarter-final with Vitalii Shepel (UKR) did not start well as he was thrown for waza-ari in the opening exchange. Petgrave kept the pressure on though and he eventually forced Shepel into an awkward position on the ground before securing the hold down for ippon.

Japan’s Goki Tajima had been in impressive form throughout the day, winning each of his fights by ippon. Petgrave though made a fast start as he put the Japanese judoka under pressure, coming close to scoring with a good sacrifice attack.

However, once Tajima saw an opening he took advantage. Petgrave did well to spin out of one big standing seoi-nage but he had little answer to the next two as he went behind by waza-ari before being thrown by ippon.

This dropped the British judoka into the bronze medal match for the final block where he took on Koshi Nagai (JPN). Once again it was Petgrave who made the better start as he soon forced Nagai into picking up a shido for false attacks.

Petgrave would soon get a shido himself for gripping the belt while failing to attack. Petgrave continued to press but as the fight went on Nagai seemed more likely to score and he did with a big throw for waza-ari.

Two more waza-ari came in the final twenty seconds as the British judoka went looking for the score to leave Petgrave in fifth place and outside of the medals.

“Jamal Petgrave has been sublime this year, winning gold in Bremen & Berlin, bronze in Russia & at the European Championships & now a 5th place at the worlds. To be so consistent, at such a competitive weight, at all the hardest events is very impressive.

“More impressive, & testament to Jamal, his parents & his coach Andy Ede, is how humble he has remained. This is just the beginning for Jamal.”

He also reserved praise for the team as a whole in making today’s results possible:

“Today was a team effort and were it not for the support of our team mates, the effort of the coaching staff (Denny & Colin), the care of the medical team (Anna & Jo) and the leadership of Nigel, I don’t believe the players could have performed as well as they did.”

Wesley Greenidge (+100kg) will be in action on the final day of individual competition in Zagreb. The judo will start from 0900 UK time with a live stream on the British Judo website and live build-up and update via @BritishJudo on Twitter

First round exit for Greenidge at Junior Worlds Scroll to top
Select the fields to be shown. Others will be hidden. Drag and drop to rearrange the order.
Click outside to hide the compare bar
Compare