You are here: Home / Featured / Howell wins Gold at the Budapest Grand Prix 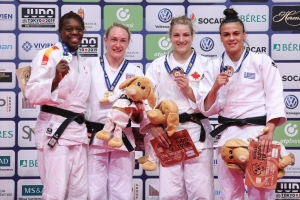 Following an opening round bye, Howell was drawn against Michela Polleres (AUT) in the second round. Despite Polleres being ranked 5th in the world, 19 places ahead of Howell, the Austrian has never defeated the Briton. This trend continued with Howell progressing to round three by a waza-ari score where she faced Gulnoza Matniyazova (UZB), who she again defeated by a waza-ari score to progress to the quarter-final to face Alice Bellandi (ITA). Howell defeated the Italian by ippon score to win Pool C and progress to the semi-final and face world number 6, Maria Portela (BRA). It took Howell less than two minutes to defeat the Brazilian and progress to the final, where she faced Maria Bernabeu (ESP), a former World Championship silver and bronze medallist. With her ground work proving decisive it was Howell who prevailed to claim the gold and her first Grand Prix title. 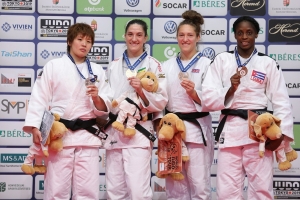 World number 5, Powell, had a bye in the opening round before facing Evelin Salanki (HUN). The gulf in class was evident as Powell progressed to the quarter-finals in a little under 90seconds. Standing between Powell and a place in the semi-final was Karen Stevenson (NED), the Dutch judoka fought hard but was no match for Powell who took victory and won the Pool by waza-ari score. In the semi-final Powell faced world number 7, Ruika Sato (JAP), but was unfortunately defeated and had to settle for a bronze medal match against Patricia Sampaio (POR), the current World Junior Championship bronze medallist. Powell’s experience prevailed as she defeated Sampaio by ippon score after 90seconds to win bronze, her first medal of 2019.

Last weekend’s Montreal Grand Prix silver medallist, Amy Livesey (-63kg) had a bye in the opening round. She defeated Kira Katzenmajer (HUN) in the second round and Anriquel Barrios (VEN) in round three to set up a quarter-final match against Junxia Yang (CHN). Unfortunately, Livesey was defeated by the athlete ranked 1 place ahead of her in the world rankings and was progressed to the Repechage where she faced world number 11, Maylin Del Toro Carvajal (CUB). The Cuban defeated Livesey to progress and later win bronze.

Stuart McWatt (-81kg) was competing in his first competition since finishing 7th at the European Games in Minsk. McWatt had a bye in the opening round before defeating Dorin Gotonoga (MDA) in the second to set up a round three match against world number 17, Didar Khamza (KAZ). The match went deep into Golden Score with Khamza able to find a winning score to defeat McWatt. Khamza later went on to finish 7th.

Jamal Petgrave (-90kg) found himself drawn against the athlete he defeated en route to claiming his European U23 Championship silver medal last year, Bas Van Empelen (NED). Petgrave continued his winning streak against the Dutch athlete to progress to the second round where he faced the current World Championship silver medallist, Ivan Felipe Silva Morales (CUB). Unfortunately, despite the match going to Golden Score, the experience of the Cuban was too much for Petgrave who was defeated. The Cuban later went on to win bronze.

2012 Olympian, Daniel Williams (-73kg) defeated Akylbek Serik (KAZ) in the opening round before being defeated by Jeferson Santos Junior (BRA) in the second round.

Max Stewart (-90kg) was dealt a tough draw facing world number 11, Islam Bozbayev (KAZ) in the first round. Despite a difference of 41 places in the world rankings, Stewart forced his opponent to Golden Score, but Bozbayev’s experience showed as he progressed to the next round and eventually win the Pool, before finishing 5th.

Sarah Adlington (+78kg) had a bye in the opening round and was defeated by Yan Wang (CHN) in the second round.

Chris Sherrington (+100kg) was drawn against Vito Dragic (SLO) in the opening round, unfortunately Sherrington amassed three shido’s and was defeated.

Obituary: Craig Fallon Scroll to top
Select the fields to be shown. Others will be hidden. Drag and drop to rearrange the order.
Click outside to hide the compare bar
Compare