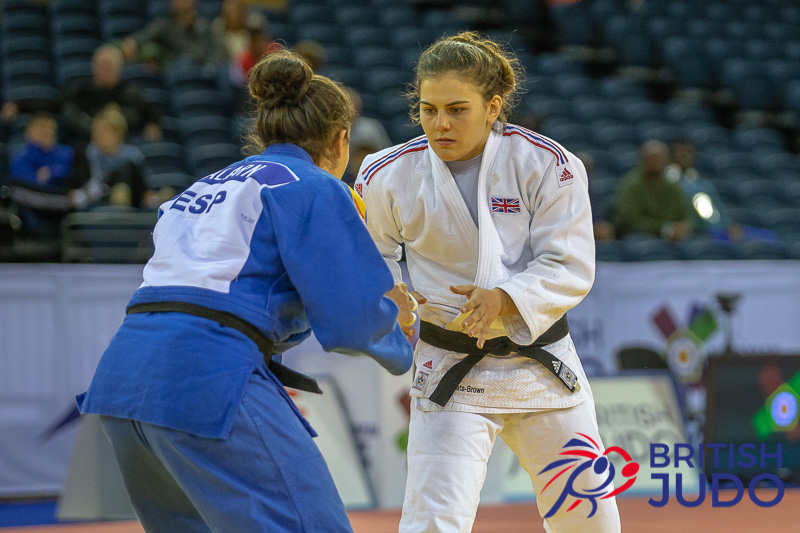 Jemima Yeats-Brown continued her impressive start at -78kg as she finished fifth in a world-class field at the 2019 Paris Grand Slam on Sunday 10 February.

Yeats-Brown has only been at -78kg since May of last year but she has already picked up some impressive results including a fifth at the 2018 World Judo Championships and a bronze at the Tel Aviv Grand Prix last month.

Yeats-Brown’s impressive newaza was to the fore in her first two contests against Unelle Snyman (RSA) and Vanessa Chala (ECU).

She made short work of Snyman as she worked into sangaku inside the opening minute and forced the South African judoka to tap.

She had to wait for her opportunity in the second round against Chala but again she took her chance in the third minute to apply juji-gatame, with the Ecuador judoka having no choice but to tap.

This put her through to the quarter-finals against WRL 2 Ruika Sato (JPN) and after an energetic start by the British fighter, it was the Japanese judoka who took control.

Yeats-Brown took the contest into golden score for the concession of a couple of shidos. The British went for a big attack early in added time and was countered by Sato for waza-ari.

Yeats-Brown dropped into the repechage final and had to take on home favourite and double Olympic medallist, Audrey Tcheumeo (FRA) for a place in the final block.

The French judoka forced a couple of early shidos on Yeats-Brown but the British fighter grew into the contest and managed to peg back a shido in her favour.

The contest looked to be going into golden score but Yeats-Brown put in one final attack to register a waza-ari score and book her place in the bronze medal contests.

There she took on Fei Chen and the Chinese judoka had picked up some good wins over former World Champions Mayra Aguiar (BRA) and Mami Umeki (JPN).

It was a gruelling contest with both fighters having chances to score in tachiwaza and newaza. On multiple occasions it was Yeats-Brown’s impressive agility that prevented Chen from scoring.

This meant Yeats-Brown finished in fifth, but she also gained 360 points towards her world ranking and Tokyo 2020 qualification.

Fellow -78kg judoka Natalie Powell finished seventh at the Paris Grand Sam for the third year in a row.

The 2017 World bronze medallist started well as she threw home judoka Sama Hawa Camara (FRA) for waza-ari twice to book a place in the quarter-final.

She then faced Luise Malzahn (GER) for a place in the semi-finals but after a good start the German judoka threw Powell for waza-ari in back to back exchanges.

Powell dropped into the repechage final and faced Mami Umeki (JPN) for a place in the bronze medal contests.

The British fighter made another good start but Umeki always looked dangerous in newaza and after a number of attempts she was able to secure osaekomi for ippon.

A cagey start saw both fighters pick up two shidos before Tarasova went ahead by waza-ari. Adlington came back well though and threw her opponent for waza-ari before finishing the contest in osaekomi.

Korea’s Minjeong Kim was too strong in the next contest though as the former World medallist showed her strength in newaza to hold Adlington down for ippon.

Weigh In Times Announced for Pre-Cadet & Cadet English Open Scroll to top
Select the fields to be shown. Others will be hidden. Drag and drop to rearrange the order.
Click outside to hide the compare bar
Compare