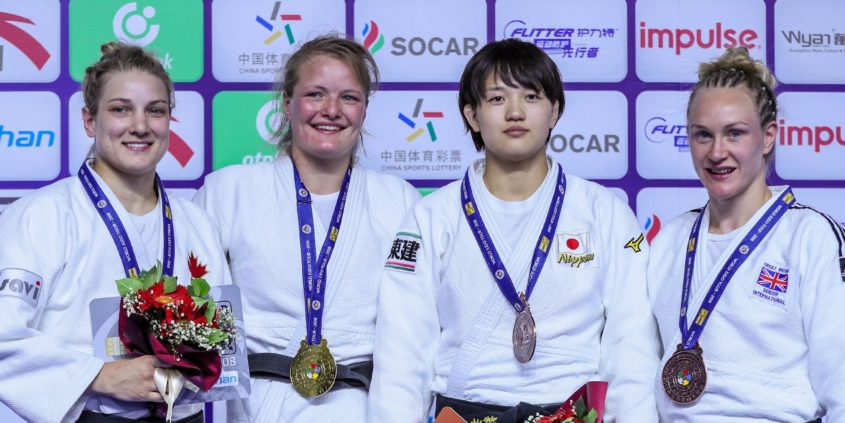 In arguably one of Gemma Howell’s finest days of judo on the mat, she claimed an excellent Bronze medal at the Hohhot Grand Prix in China to back up the Bronze medal won at the European Championships earlier this month.

The draw was not kind to Howell and her route to the Final Block was anything but straight forward but an excellent win over the World No.1 and current World Champion Chizuru Arai (JPN) was the spring board to her claiming the bronze medal.

World No.5 Anna Bernholm stood in the way of Howell claiming the Bronze. Bernholm recently won Gold at the Antalya Grand Prix so has showed signs of recent form on the mat. It was a cagey affair throughout and with the scores level after regulation time, Golden Score beckoned. Bernholm possessed a distinct height advantage over Howell and continually tried to use this to her advantage with her left-handed grip. Howell, however, dug deep and repelled the best that Bernholm could throw at her and with just over two minutes gone in Golden Score, Howell was able to register a maka-komi to hand her a deserved medal.

Howell started the day in quick-fire fashion as she came up against Austria’s World No.16 Michaela Polleres in the -70kg category. It was a battle of the European Championships Bronze medallists and it was Howell who came out on top again as her impressive newaza skills ended the contest in the opening minute. Similar to her victory at the European Championships, Howell worked Polleres onto the mat and worked hard to secure the strangle and after finding a way to secure her opponent, Polleres had no choice but to submit.

The contests would get no easier for Howell as Germany’s World No.33 Laura Vargas Koch awaited her in the second round. As anticipated it was close fought contest between the two as neither judoka could quite find a score to take the lead. With two shidos a piece and entering the final minute of the contest, Howell worked Vargas Koch to the mat and sensed an opportunity. She worked hard in newaza to secure a second victory of the day via strangle.

It would prove to get no easier for Howell as Japan’s World No.1 Chizuru Arai stood in her way in Quarter Final, and in Howell’s most impressive contest of the day, she secured an ippon finish over Arai. To add context to the result, it is the first time that World Champion Arai had not finished in a the top two in a competition that she had entered since 2015!  Both fighters took some time to size each other up and Howell started to ramp up the pressure on the Japanese judoka. Arai picked up shidos frequently and with Howell continuing to attack, she picked up a third shido and handed Howell the victory.

She couldn’t keep up the momentum into the semi finals however, as Holland’s Sanne Van Dijke was able to topple Howell’s bid for Gold ended with a waza-ari defeat. She brushed aside Mongolia’s Naranjargal Tsend-Ayush in under a minute to set up the bronze medal contest against Bernholm.

Daniel Powell continued to build up his experience at Senior level competition as he took on Brazil’s World No.18 Marcel Contini in his opening round contest in the -73kg competition. Contini has a range of Grand Slam and Grand Prix medals to his name and Powell secured an impressive victory over the Brazilian courtesy of a waza-ari. He had to be careful during the closing stages of the contest after picking up shidos throughout but showed admirable contest management to see off Contini.

Russia’s World No.16 Musa Mogushkov stood in Powell’s way in the second round but Powell could not see off the Russian as he fell to an ippon defeat. Mogushkov scored with a waza-ari with a minute gone on the clock and caught Powell just a minute later with a well-timed throw.

Stuart McWatt opened his account in the -81kg competition with an impressive ippon defeat of home judoka Haiyuan Gao in the first round. McWatt dominated throughout against his inexperienced opponent and eventually secured the ippon finish with just over half of the contest remaining. World No.5 Alan Khubetsov (RUS) awaited McWatt in the second round. An early waza-ari score for the Russian proved to be the difference between the two as Khubetsov forced McWatt to the mat and drove hard with his legs to rotate McWatt and pick up the score. McWatt could not respond in the time and exited at the second round.

With Lucy Renshall’s late withdrawal through injury, Lubjana Piovesana was GB’s sole representative in the -63kg category. Piovesana has shown recent good form on the mat following a Gold medal at the Orenburg European Cup in Russia, but after receiving a bye in the first round, she came up against China’s Jing Tang. It was a tight contest throughout with several near misses for Piovesana and when she did connect with a throw, Tang was able to find the rotation to avoid the score. Just under a minute into Golden Score, Piovesana was countered and rolled over to secure a waza-ari for Tang and eliminate Piovesana.

Owen Livesey suffered a first round defeat in the -81kg category at the hands of China’s Lasai Zha, with a single waza-ari proving to be the difference between the two fighters after regulation time.

Tune in tomorrow as Jamal Petgrave (-90kg), Max Stewart (-90kg) and Jemima Yeats-Brown (-78kg) all take to the mat as they look to add to Gemma Howell’s Bronze medal win. Keep an eye on our social media channels for full live event reporting from the Final Block from 9:00am tomorrow morning. 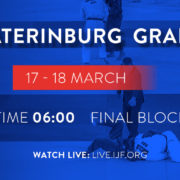 Early Exits for GB on Final Day in Hohhot Scroll to top
Select the fields to be shown. Others will be hidden. Drag and drop to rearrange the order.
Click outside to hide the compare bar
Compare
Wishlist 0
Open wishlist page Continue shopping