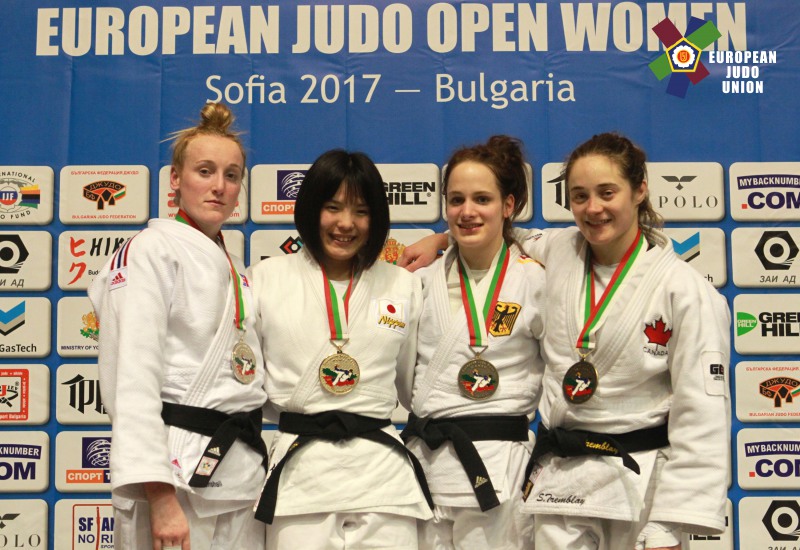 Lucy Renshall (-63kg) made a strong start to 2017 with a hard fought silver medal at the Sofia European Open in Bulgaria on Saturday 4 February.

The SKK judoka had won gold at her previous two European Opens in Glasgow and Tallinn last year and got off to the best possible start as she saw off Lei Reimann (GER) inside the first minute and half as she forced the German to tap out via Sankaku.

Japan’s Shiori Sato had been impressive throughout winning all but one of her contests by ippon and she proved too good for Renshall on the day. Neither fighter could be separated by a score at the end of regulation time and in golden score the Japanese fighter’s superior attack rate saw Renshall pick up a third shido to lose out on gold.

Chelsie Giles (-52kg) impressed as she just missed out on bronze with a fifth place finish in Sofia. The 20 year old picked up the impressive scalp of World No.9 Gili Cohen (ISR) as she came back from going a waza-ari down to win the contest by two waza-ari to one. Giles would just miss out to Ecaterina Guica (CAN) in the bronze medal match, the Canadian having also beaten Kelly Edwards earlier in the day.

Edwards finished seventh in her first competition of 2017 while Kim Renicks (-48kg) lost out in the Shirine Boukli (FRA) in the second round in a lung-bursting content that went to golden score.

Neil MacDonald (-60kg) and Sam Hall (-66kg) were unable to get into medal matches at the Odivelas European Open in Portugal on Saturday 4 February. MacDonald lost to Russia’s Savva Karakizidi in his opening contest while Hall was unable to get past Alexandre Mariac (FRA) in the second round. Max Stewart (-90kg) withdrew due to illness.

There was also medal success at the Belgian Ladies Open Arlon with Gemma Howell and Acelya Toprak both medalling in the senior competition on Sunday 5 February with gold and silver respectively.

Howell, fighting at -70kg, was entered in her first competition since the Tbilisi Grand Prix last year and displayed her superb conditioning on her way to the final as she won two golden score contests in a row with despite having only ten minutes’ rest in between.

At the Vise International Open in Belgium, Owen Livesey (-81kg) made his return to international competition with a silver medal. The Camberley judoka just missed out a gold medal as he lost a golden score contest to Germany’s Dominic Ressel. There was also a fifth place for Andrew Melbourne at +100kg.

Latest update from the IJF on adaptation of refereeing rules

Sport England Launches Community Asset Fund Scroll to top
Select the fields to be shown. Others will be hidden. Drag and drop to rearrange the order.
Click outside to hide the compare bar
Compare