37 GB judoka were in action over the weekend at the Bucharest European Open and Leibnitz Junior European Cup on Saturday 3 and Sunday 4 June. Across both competitions, featuring junior and senior judoka, GB Judo came away with five medals in total including gold for Acelya Toprak in Austria. 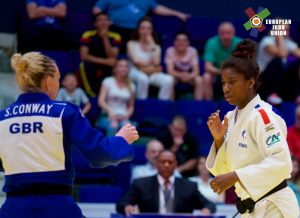 Conway takes on Gahe in the -70kg Final

Rio Olympic bronze medallist Sally Conway (-70kg) made her long-awaited return to competitive judo in Bucharest. The 30 year old showed little signs of rustiness however as she brought her world-class newaza skills out in her first contest against Italy’s Alessandra Prosdocimo, catching her in osaekomi for ippon.

In the semi-final she took on fellow GB judoka Gemma Howell and once it again it was newaza that won the day as she forced Howell to tap out via juji-gatame. France’s World No.5 Eve Marie Gahe was next up and in an exciting contest both judoka were looking to score big. In the end though it was Gahe who took the win as she threw Conway for ippon. 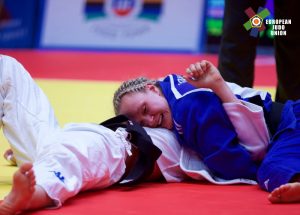 Howell meanwhile dropped into the bronze medal contest against Alice Bellandi (ITA). The two judoka had fought once before with Howell coming out on top of that contest at the Oberwart European Open in February. This contest was no different with Howell taking advantage of a poor attack by Bellandi to transition into osaekomi and secure the win and another podium finish.

There was also a seventh place finish for Lubjana Piovesana (-63kg) as she continues to gain experience at senior level. The 20 year old lost two hard fought contests to World No.11 Andreja Leski (SLo) and Israel’s Rotem Shor in golden score to finish outside the medals. 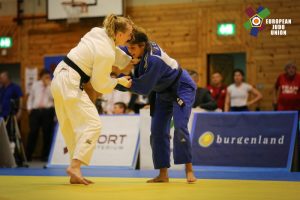 Acelya Toprak’s -57kg gold medal was the standout result from a positive weekend in Austria for the GB junior judoka. The Londoner has had an injury hit start to 2017 but was able to medal at her last tournament in St Petersburg in April.

Toprak showed good contest management as she recovered from conceding two early shidos against Ichinkhorloo Munkhtsedev (AZE) in her opening contest to get two waza-ari on the board and move into the next round. Her next three contests on the way to the final were all won by ippon against Xenia Coban (GER), Anita Cantina (ITA) and Junior World No.5 Julia Kowalczyk (POL). Against Cantina, Toprak showed her conditioning and contest management as she forced the Italian to pick up a third shido in golden score.

Speaking afterwards GB Junior Coach Matt Purssey said: “Very good performance from Acelya today. She was focused and fought with intensity in all of her matches. A deserved champion.” 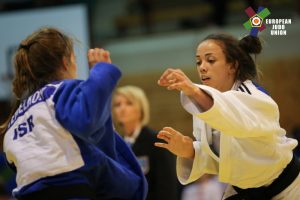 Chelsie Giles (-52kg) just missed out on gold as she lost a close final to Israel’s Betina Temelkova. The Israeli judoka proved to be an awkward customer with Giles unable to get into a rhythm. Despite going behind by two waza-ari Giles was able to pressure her opponent into picking up three shidos. However the final shido was overturned by the commission leaving Giles with silver.

Going into the final the Coventry judoka had been very impressive winning each of her contests by ippon with a good mix of tachiwaza and newaza throughout.

Eric Ham (-73kg) finished on the medal rostrum at international level for the first time since the Gdynia Junior European Cup last year. The Glossop judoka has picked up some strong results at senior level this year but had been unable to bring that to Junior competition. Ham showed his all-round judo on his way to the semi-final winning each contest by ippon. 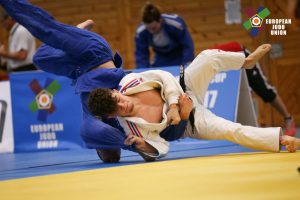 He lost out in the semi-final to Russia’s Alexandr Kolesnik but recovered well for the bronze medal match against Aklybek Serik (KAZ) where he forced his opponent to pick up three shidos.

There was also a fifth place for Wesley Greenidge (+100kg) as he impressed with some big throws throughout the day. However he was unable to get the better of Russia’s Alexander Antonov in the bronze medal match.

Social Media Round-Up: 29 May – 4 June Scroll to top
Select the fields to be shown. Others will be hidden. Drag and drop to rearrange the order.
Click outside to hide the compare bar
Compare