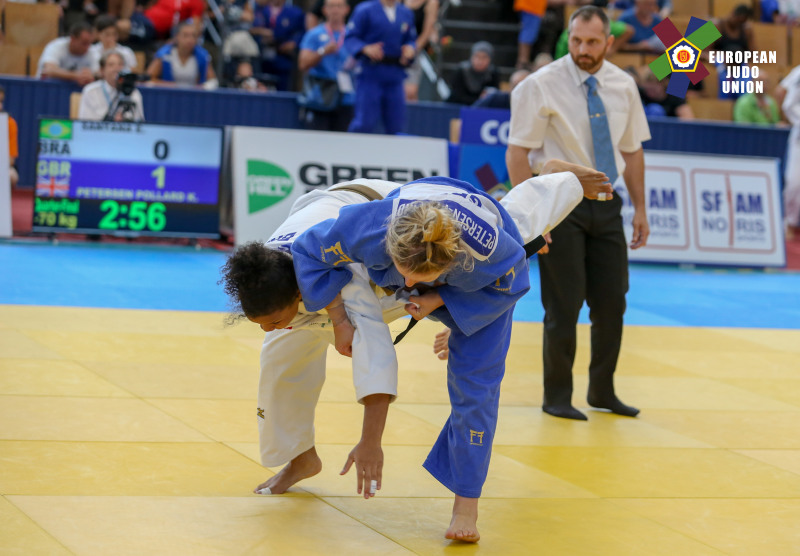 There were no medals for GB Judo at the Berlin Junior European Cup (28 – 29 July) but there were several encouraging performances from British judoka in the German capital.

Kelly Petersen-Pollard and Harry Lovell-Hewitt both finished fifth at -70kg and -90kg respectively.

Petersen-Pollard was too strong for German judoka Marlene Winter in the first round as her newaza skills came to the fore. She followed that up in the second round against Turkey’s Semanur Erdogan as she forced her opponent to pick up three shidos as well scoring a waza-ari of her own.

In the quarter-final she scored an impressive win over Brazil’s two-time and current Pan American Junior gold medallist Ellen Santana, beating her thanks to an early waza-ari score.

Martina Esposito (ITA) was too good in the semi-final with the Italian throwing the British fighter for ippon in the opening minute.

Germany’s Marlene Galandi lay in wait in the bronze medal contest and the fight went into golden score with the British judoka a shido down.

Petersen-Pollard picked up a second shido in golden score before Galandi finished the contest with five minutes and 52 seconds on the clock with an ippon score.

Lovell-Hewitt has had a strong year at Junior level with three European Cup medals so far. He made a powerful start he forced Belgium Karel Foubert to pick up three shidos in the first round followed by a 90 second ippon win over Eduard Serban (ROU).

Russia’s Eldar Allakhverdiev was next up in the quarter-finals and the powerful Russian took the win with two waza-ari scores.

Dropping into the repechage the British judoka ground out a tough win over Mikheili Bekauri (GEO), a single waza-ari proving decisive.

He made short work of Matheus Assis (BRA) in the repechage final, winning inside the first minute to set up a bronze medal fight with Tim Schmidt (GER).

Going into the final minute Lovell-Hewitt had forced the German to pick up two shidos but Schmidt took his opportunity and went ahead by waza-ari with 41 seconds left, a lead he held onto to the end.

There were also strong seventh place finishes for some of the youngest members of the GB Judo team out in Berlin.

Happidojo youngster completes Sho grading scheme Scroll to top
Select the fields to be shown. Others will be hidden. Drag and drop to rearrange the order.
Click outside to hide the compare bar
Compare