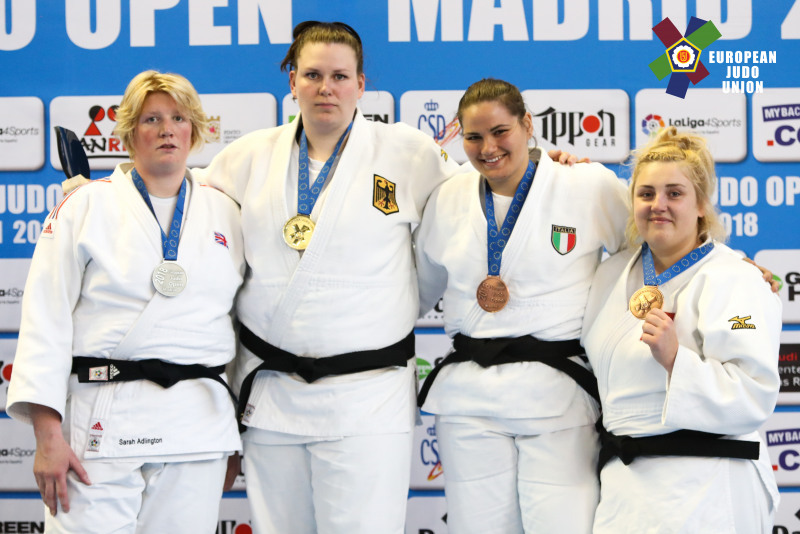 This weekend saw GB Judo take to the mat in Spain and Austria for the Madrid European Open and the Leibnitz Junior European Cup on Saturday 2 and Sunday 3 June.

The Spanish capital played host to the second Olympic qualification event, and the first in Europe as 15 GB judoka looked to make their mark.

The Edinburgh judoka was fighting for the first time since February and she showed all her experience as she made her way to the final at the expense of Sara Alvarez (ESP) and Anna Zaleczna (POL).

Germany’s Kristin Buessow faced her in the final and it was the second seed who took the win with 90 seconds to go. Both judoka had picked up two shidos before Buessow took Adlington backed for waza-ari and went into osaekomi to finish the contest.

There was also a seventh-place finish for Sarah Hawkes, also at +78kg as she lost a close contest to Patricia Ferrer Bartulos (ESP) in the repechage final.

An eleven strong GB Judo Junior team were up against a world-class field in Austria as the Leibnitz Junior European Cup once again lived up to its billing as one of the strongest events on the Junior circuit.

Highland Budokan judoka Josie Steele (-57kg) finished fifth for the third time this year at a Junior European Cup but she showed her class, winning four fights, including wins over Brigitta Varga (HUN), who won -48kg gold at the Cadet Worlds in 2017, and Aiida Karchayeva (KAZ), the current Junior Asian gold medallist at -57kg.

Steele lost out in the bronze medal contest to Jana Ziegler (GER) with an early waza-ari proving decisive.

There was also a fifth place for Shelley Ludford (-78kg) as the Osaka judoka continued her development at her new weight.

The British judoka’s two defeats came at the hands of Junior World medallists Julie Hoelterhoff (GER) and Teresa Zenker (GER) with Ludford unlucky to have a waza-ari taken off in her bronze medal contest against the latter.

However, Ludford continued to display her ability to win in tachiwaza and newaza including a dominant win over Italy’s Betty Vuk, with the British judoka having lost to Vuk at the Lignano Junior European Cup earlier this year.

British Judo backs first ever Coaching Week Scroll to top
Select the fields to be shown. Others will be hidden. Drag and drop to rearrange the order.
Click outside to hide the compare bar
Compare