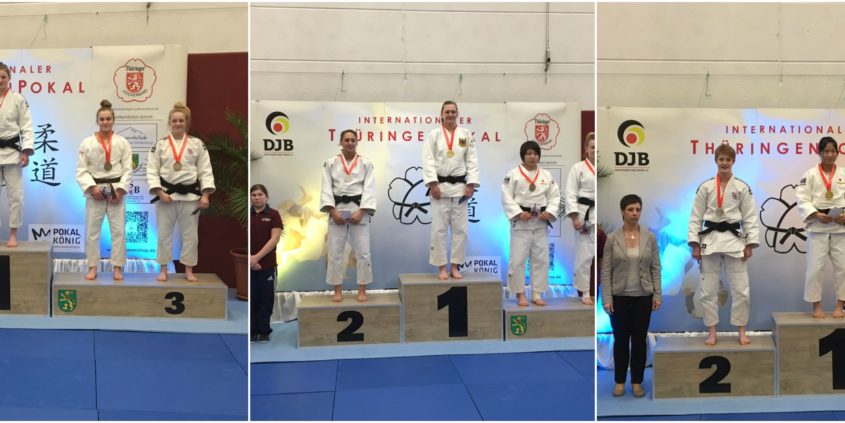 Shelley Ludford and Josie Steele secured the pick of the results over the weekend as both claimed silver in the -57kg and -78kg categories at the International Thuringia Cup, Germany.

Ludford, a Judo Club Osaka athlete, continued her good run of form that has seen her medal at every event since her double Gold medal triumph at the British Championships in December where she scooped both the junior and senior -78kg titles.

She was imperious form throughout the morning session as she despatched all of her opponents via ippon on the way to setting up a Gold Medal contest with Teresa Zenker. Hannah Schatten (GER) was her first victim of the day as Ludford comfortably won with less than half of the contest left, before condemning Christina Faber (GER) to a similar fate.

A impressive semi final victory over Japanese judoka Reina Tanaka set up the final against Senior World N.45 Zenker. She is the current silver medalist from the Junior World Championships and proved to be one step too far for Ludford as Zenker came out on top, winning via ippon.

Josie Steele matched Ludford’s result with a similarly impressive day on the mat in Germany.

Her opening four matches passed at the flash of an eye with none of them lasting the distance. A prompt 36 second opening round win against Maria-Lea Thömen set the tone for the day as she secured four ippon finishes in as many contests.

It wasn’t always straight forward for Steele however, as a gruelling six minute Quarter Final contest against Carla Heyere pushed her to her limits before she was able to secure yet another ippon to progress through to the semi finals.

No ippon for Steele in the semi final, but still a dominant performance against Maryline Louis Sidney that again went to Golden Score, this time “just” a five minute contest before a waza-ari score was enough to set up a Gold medal contest against Japan’s Mizuki Kagawa. The two previous contests had taken their toll on the young Scot though and she fell to an ippon defeat to win a deserved Silver medal.

Darcie Hancocks (-57kg) picked up a bronze medal in the Cadet competition. Similar to Steele and Ludford, she secured a quick fire ippon in her opening round before being pushed the length of regulation time by Maartje Daamen.

She soon made up for that though with a 22 second contest in the following round as she eased past Samira Bock (GER).

Her run of results was eventually halted by eventual champion Malin Fischer (GER) in the Semi Finals which dropped Hancocks in the Bronze medal contest. It was a tough match against Alexe Wagemaker for the podium position but one that was fully deserved as she pushed into Golden Score before securing a waza-ari score.

Olivia Piechota was eliminated in her opening round contest of the -52kg competition.

GB Judo were unable to match Jamal Petgrave’s historic Gold medal from last year as it left Bremen without a medal following a weekend that saw some high quality judo from the 900+ strong field.

In a competition that regularly sees some of the top athletes from around the world taking part, the pick of the results for GB included two fifth placed finishes for Oliver Barratt (-90kg) and Beau Farrance (+90kg) while Max Gregory (-90kg) claimed a seventh place finish.

Alex Paske (-73kg) continued his recent run of placing in competitions by again claiming 7th place at the Buenos Aires Pan American Open. He has now finished in 7th position in his last three competitions.

Destination@BritishJudo Apprenticeship Now Recruiting Aspiring Coaches! Scroll to top
Select the fields to be shown. Others will be hidden. Drag and drop to rearrange the order.
Click outside to hide the compare bar
Compare