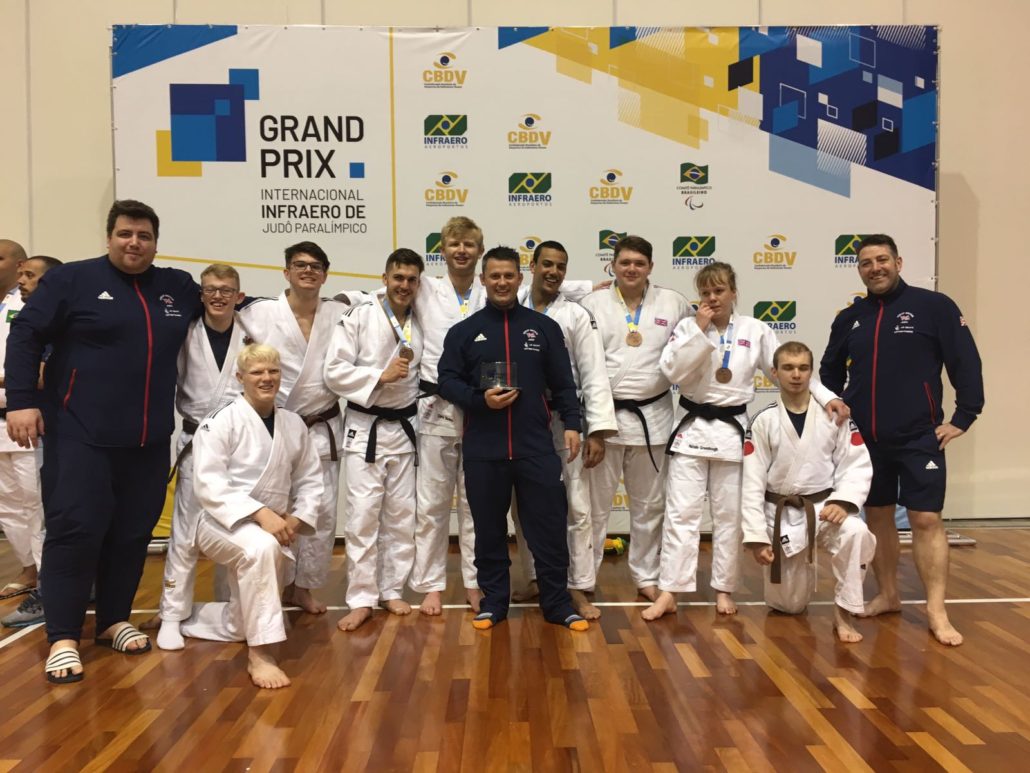 The GB Judo VI Team had a successful day in Sao Paolo at the Paralympic International Judo Infraero GP with a five medal haul including gold medals for Elliot Stewart (-90kg) and Chris Skelley (-100kg).

Stewart was fighting at his first competition of 2018 and he had a tough first contest against Rio 2016 bronze medallist Dartanyon Crockett (USA).

The British judoka threw his opponent with a massive osoto-gari and continued in this form throughout the day, winning each contest by ippon.

The semi-final against Roberto Silva (BRA) proved to be a tough affair as he went behind after being countered.

However, the British judoka showed strong contest management to apply pressure and level the score going into golden score before finishing the contest with an ippon.

In the final he proved too strong for Brazil’s Arthur Silva, as he backed up an early waza-ari with an ippon in the next exchange.

Chris Skelley was also the standout judoka in his weight category and he showed he was in form with two good early wins with his signature tomoe – nage.

The Hull judoka worked his way through to the final where he faced Brazil’s Paralympic legend Antonio Tenorio.

The four-time Paralympic champion made a strong start but the British judoka was patient and took his chance in newaza and forced the Brazilian to tap.

Natalie Greenhough (-70kg) added a strong bronze medal to her collection with her only defeat coming to Rio 2016 medallist Alana Maldonado (BRA) in the semi-finals.

In the bronze medal contest Greenhough dominated her opponent as she threw her for waza-ari before securing a tight osaekomi to complete the win.

Dan Powell (-81kg) continued his return to international competition with another bronze medal. The London 2012 Paralympian had to come through the repechage and faced World No.6 Harley Arruda (BRA).

Powell went behind early on but showed good tactical awareness to secure a rolling strangle which forced his opponent to tap out.

Jack Hodgson (+100kg) also had to make his way through the repechage after losing to World No.1 Wilians de Araujo (BRA). The British judoka made up for that early disappointment in his repechage contests with three massive ippon wins.

There were also highly encouraging and positive fifth places for some of the younger members of the team in Sam Price (-60kg), Connah Anders (-66kg) and Cameron Bradley (-81kg).

Alex Paske finished seventh at the Lima Panamerican Open in the second leg of his South American tour this month.

The -73kg judoka made a solid start as he Lwilli Santana (DOM) by ippon in golden score. This booked Paske a place in the quarter-finals against Julien La Rocca (FRA).

Unfortunately, the French judoka proved too strong in a contest that went into golden score. The British judoka was forced into picking up three shido and dropped into the repechage.

Colombia’s Leider Navarro was next up and once again Paske was taken into golden score. Both men were tied on a waza-ari but it was Navarro who came out on top with a second waza-ari score.

The first Junior European Cup of 2018 saw a young and relatively inexperienced GB Judo Junior team take to the mat in Portugal.

The Coventry judoka won two of her fights on the way to the final by ippon, including a strong win over Junior Pan American Championship medallist Marie Besson (CAN) in the semi-final.

Javadian lost out in the final to Spain’s Nina Estefania Esteo Linne as she was forced to pick up three shido.

The Junior British Champion won each of his fights by ippon on the way to the final including a 13 second win the semi-final against Tom Boneschansker (NED).

Italy’s Andrea Fusco was too good in the final as he won by ippon.

Pinewood’s Olivia Spellman showed her stamina to win a lung-bursting bronze medal contest at -63kg. The 20 year old started the day with two quick wins but was unable to get passed Finland’s Junior European bronze medallist Emilia Kanerva (FIN) in the semi-final.

Her bronze medal contest with Flavia Favorini (ITA) went over two minutes into golden score before Spellman threw her opponent for ippon, to the delight of the GB team in the stands.

Shelley Ludford added a second bronze for GB Judo as she continued her development at -78kg. The Judo Club Osaka judoka lost to Portugal’s Junior World medallist Patricia Sampaio early on and had to come through the repechage.

Ludford proved too strong for the rest of her opponents, winning each contest by ippon with a mix of strong tachiwaza and newaza.

There was also a very credible fifth place for Josie Steele (-57kg) on her Junior European Cup debut.

Destination@BritishJudo Update: Stockton-On-Tees Hub Scroll to top
Select the fields to be shown. Others will be hidden. Drag and drop to rearrange the order.
Click outside to hide the compare bar
Compare
Wishlist 0
Open wishlist page Continue shopping