In a month that sees back-to-back Grand Prix, with Antalya, Turkey next on the schedule in 7 day’s time, GB Judo will be looking to better the two medal haul won by Natalie Powell and Gemma Howell at last year’s Tbilisi event. A total of 262 judoka will be vying for medals over the course of the next three days and the team know that if they are serious about reaching the podium, they must display their best judo and defeat some of the best judoka in the world.

Bronze medalist and World No.6 Natalie Powell (-78kg) sadly has not made the trip to Georgia after failing to recover from a niggling injury sustained during training within the last couple of weeks.

The opening day of the tournament will be a busy one for the squad with five judoka taking to the mat in the hunt for medals.

Neil MacDonald (-60kg) will be making his Grand Prix debut after an impressive junior career to date which sees him ranked the current World No.1 in his weight category. With his previous best seeing him finish in bronze medal placing at the European Open in Glasgow back in October 2016, it is clear that the 19 year old has a promising career ahead of himself. He is due to face Sahib Asgarov (AZE) in the first round with a potential match up with sixth seeded Lukhumi Chkhvimiani (GEO) in the following round.

MacDonald will be joined on the mat by Sam Hall (-66kg), also making his Grand Prix debut, as he looks to better his run of three fifth placed finishes in his last five outings in European competition. The latest of which came just six weeks ago at the European Open in Rome. Hall faces Lithuanian Andrej Klokov in the first round, an opponent in which he defeated at the European Open in Tailinn in September to claim 5th place.

In the female competition, Kimberley Renicks (-48kg), Kelly Edwards (-52kg), Chelsie Giles (-52kg) will be flying the British flag on Friday. Edwards has managed to shrug off injury which saw her miss the Dusseldorf Grand Prix and wants to rediscover the form that saw her medal in each of her last five events of 2016 including a bronze medal at the Abu Dhabi Grand Slam in October, gold at the European Open in Glasgow and bronzes in Zagreb, Tallinn and Germany. Giles has already shown she can compete at senior level with wins over the likes of Gili Cohen (ISR) and Karolina Pienkowska (POL) and goes in having won bronze at the competitive Thuringia Open last week. Renicks will take on Stefannie Arissa Koyama (BRA) in the first round whilst Edwards and Giles, seeded 7th and 8th respectively in the -52kg, will compete against Nazakat Azizova (AZE) and Guidana Almukhanbetova (KAZ). 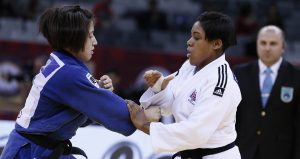 Saturday sees the return to action of Nekoda Smythe-Davis. Following the Rio Olympics, Smythe-Davis decided to have surgery on a wrist injury and following a lengthy spell of rehab she’s eager to return to competitive action in a high class -63kg category. She will take on World No.30 Mungunchimeg Baldorj (MGL) in the first round. Nekoda will be joined by Amy Livesey (-63kg) who is also on the comeback trail following injury and they will have to contend with the likes of Austrian World No.3 Kathrin Unterwurzacher and World No.10 Mariana Silva from Brazil if they have hopes of bringing back a medal. Livesey will have to contend with Khanim Huseynova with 3rd seeded Andreja Leski possibly lying in wait in the 2nd round.

Also on Saturday Aaron Turner (-73kg) and Owen Livesey (-81kg) will make their Grand Prix returns. Turner’s best finish to date includes bronze medals in the Pan American Opens in 2015, while 2014 Commonwealth Games Champion Livesey is making his first IJF world tour appearance of 2017. Livesey is seeded eighth for -81kg and has received a bye in the first round. He will take on the winner of the contest between Bojan Dosen (SRB) and Adlet Missin (KAZ). Turner will compete against Zhansay Smagulov (KAZ) in his first round match.

Birmingham judoka Max Stewart (-90kg) made a successful step up from -81kg in 2016 and he will go in confident of putting in a good showing as the sole British judoka in action on Sunday. Max has experience of competing at these events despite the fact he is just 23 years old and has Grand Prix gold (Qingdao 2016) and bronze (Zagreb 2016) medals to his name already as well as an impressive fifth place on his Paris Grand Slam debut at the start of 2017. Stewart finds himself as the top seed in the -90kg and starts the competition with a bye. His second round opponent will be Archili Gogolashvili from Georgia.

Competition starts at 1000/1100 local time on all days with live coverage via ippon.tv and you can find the full draw at ippon.org. Join the conversation on #JudoTbilisi2017 and follow @BritishJudo on Twitter for live results updates on the British judoka.

REVIEW | Difficult First Day at the Tbilisi Grand Prix Scroll to top
Select the fields to be shown. Others will be hidden. Drag and drop to rearrange the order.
Click outside to hide the compare bar
Compare