The IJF World Tour rolls into Germany for the Dusseldorf Grand Slam this weekend as a host of top GB talent will step onto the mat looking for vital Olympic qualification points as the clock draws closer to Tokyo.

A strong team of 11 British athletes will be competing against some of the world’s best judoka in what traditionally has always been a strong tournament with a world-class standard of judo……and a field size of over 600 athletes!

Nekoda Smythe-Davis returns to the arena where she won her landmark Grand Slam Gold medal last year following a series of strong performances on the World Tour that saw her fully deserve her place on top of the podium. Currently lying at No.4 in the -57kg World Rankings, Smythe-Davis enters the competition as the No.3 seed in a strong division which sees six of the top ten in the world all entered in Germany.

Sally Conway will be looking to regain some momentum in the -70kg competition following her early exits at the Paris Grand Slam earlier this month and the season-ending Guangzhou Masters, both at the hands of Spain’s WRL 16 Maria Bernabeu.

Ashley McKenzie will be looking for his first medal since the Zagreb Grand Prix last July when he steps onto the mat on the first day of competition tomorrow. A near-miss at Tel-Aviv and a third round exit in Paris has seen the Camberley judoka slip to 14 in the World, but a strong competition in Dusseldorf will propel him back up around the World’s Top 10 once again.

He is joined in the male competition by Stuart McWatt (-81kg) and Max Stewart (-90kg) as they look to reach the later stages in Germany. McWatt has demonstrated great form in his last five competitions, placing in all but one. A silver medal at the Odivelas European Open two weeks ago has seen him climb the rankings following an injury-ravaged beginning to his career. Stewart lost in the second round of his previous competition in Odivelas but with a strong -90kg competition including eight of the top ten, he will need to be on his best form to challenge for a medal.

A strong end to 2018 saw Chelsie Giles claim her maiden Grand Prix and Grand Slam medals and gain entry into the season-ending Masters competition. A Bronze at the Abu Dhabi Grand Slam coupled together with a Silver and Bronze medal at the Antalya and Budapest Grand Prix respectively. It looks to be an open -52kg competition with World No.1 Amandine Nordmeyer the only representative of the World’s Top 5.

Amy Livesey currently ranks just outside of the World’s Top 20 in the -63kg competition (WRL 21), and alongside compatriot Lubjana Piovesana (WRL 28), the pair will be looking to make major strides in a strong -63kg category this year which also features several Grand Slam and Grand Prix medallists. Livesey has not competed since November 2018 in which she claimed a Bronze medal. Piovesana has started 2019 with a bang following a silver medal success at the Sofia European Open earlier this month and came after her biggest win to date, the European U23 Championships.

Week by week, the -78kg competition looks an increasingly intriguing domestic rivalry between Jemima Yeats-Brown and Natalie Powell. Powell is the currently WRL 5 and ended 2018 on a high with a bronze medal at the Masters followed by a 7th placed finish in Paris. Yeats-Brown on the other hand only made the step up to -78kg following major injury. Since the change, she has placed in six of the eight international events that she has entered, along with claiming the British title. She looks to be an exciting prospect in the build up to Tokyo as she continues to prove her doubters wrong at this weight category.

Sarah Adlington currently lies at World No. 16 in the +78kg competition following a series of near misses in the back end of 2018. Three consecutive fifth placed finishes in Tashkent, The Hague and World Championships have demonstrated consistency for the Scot but just missing out on the podium places. On paper, it is a strong competition with eight of the top nine athletes in the category seeded.

Catch all of the action LIVE from Germany at www.britishjudo.org.uk from 7:30am on Friday and Sunday morning and 8:00am on Saturday with the Final Block scheduled for 4:00pm on all competition days. 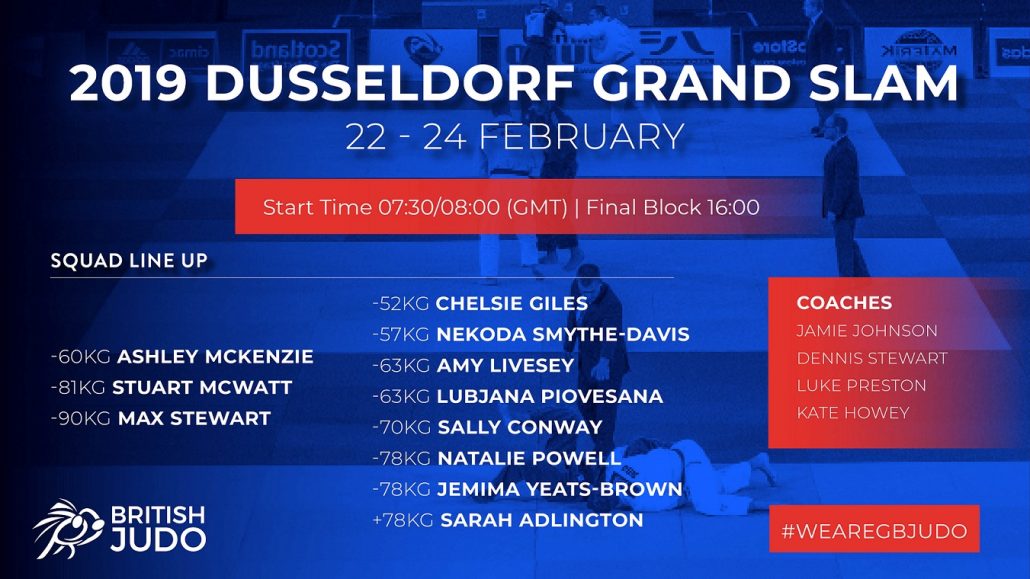 STATEMENT: Change of the number of Senior players per mat per day

Did You Know? You can now submit gradings through “The Dojo”!
Scroll to top
Select the fields to be shown. Others will be hidden. Drag and drop to rearrange the order.
Compare
Wishlist 0
Open wishlist page Continue shopping
We use cookies to ensure that we give you the best experience on our website. By continuing to use our website, you agree to the use of cookies.OKRead our Privacy Policy