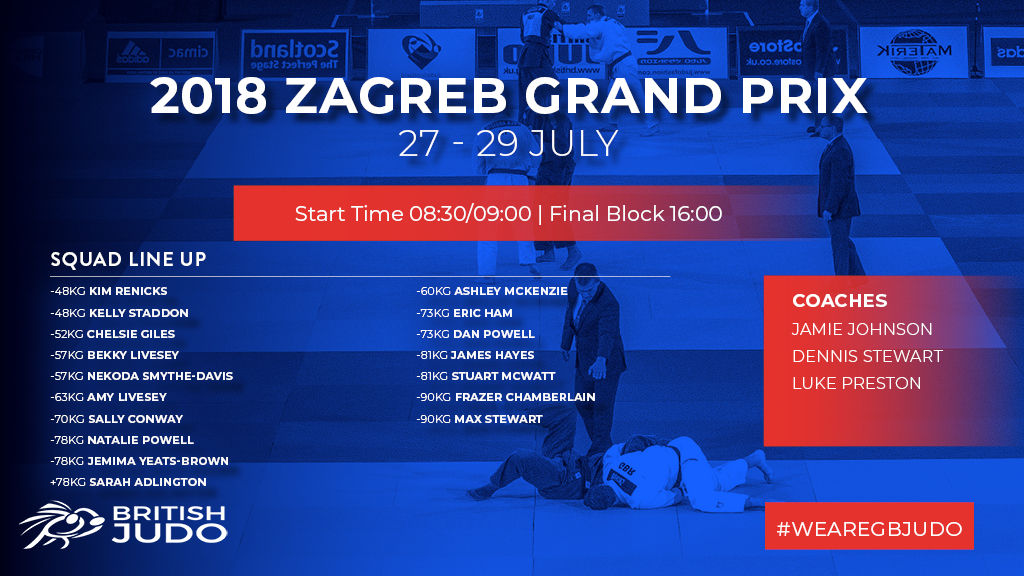 GB Judo will take on a world-class field at the 2018 Zagreb Grand Prix from Friday 27 to Sunday 29 July.

17 British judoka will be stepping on the tatami over the weekend in an entry that is packed full of Olympic and World champions and medallists.

Zagreb is the second Grand Prix of the qualifying cycle and an important opportunity for judoka to move themselves up the rankings ahead of the 2018 World Judo Championships in Baku (20 – 27 September).

Current World bronze medallist Nekoda Smythe-Davis (-57kg) has had a lot of success in Zagreb so far in her career with gold in 2015 and silver last year.

The British judoka faces a tough opening contest though as she takes on Karakas Hedvig (HUN). The Hungarian currently holds a 3 – 1 winning record but each contest has been close with the British fighter winning their last fight at the Dusseldorf Grand Slam in February.

Ashley McKenzie (-60kg) will be aiming to continue a consistent run of form which has seen him medal at the European Championships and Paris Grand Slam this year.

McKenzie takes on Yann Siccardi (MON) in his first fight with a potential semi-final against old rival Bekir Ozlu (TUR) in the offing.

Joining Smythe-Davis at -57kg Bekky Livesey who makes her first appearance at a Grand Prix since The Hague last November.

The SKK judoka won her first Grand Prix medal in Zagreb back in 2016 and she faces Bulgaria’s former World silver medallist Ivelina Ilieva in the first round.

This will be the third time Staddon has faced Costa this year with the Portuguese judoka winning close fights on both occasions. Renicks will be looking to get her first win over Dolgova, having lost their last three contests.

-52kg judoka Chelsie Giles won her maiden Grand Prix medal earlier this year with silver in Antalya and she will be aiming to bring that form to Zagreb. She faces Portugal’s Mariana Esteves in the first round.

Rio 2016 bronze medallist Sally Conway has been another consistent performer in 2018 with medals in her last three competitions including Paris Grand Slam gold and European Championships silver.

The -70kg fighter faces Roxane Taeymans (BEL) in the first round, their first meeting since the Samsun Grand Prix in 2015.

Following the late withdrawal of Alice Schlesinger due to a back complaint, Amy Livesey is the sole GB representative at -63kg in Zagreb.

Livesey is fighting for the first time at a world ranking event since the Tunis Grand Prix in January and she takes on young Israeli judoka Gili Sharir in the first round.

Eric Ham (-73kg) finished seventh at his last Grand Prix in Tbilisi earlier this year and goes into Zagreb off the back of a long block of training camps and European Cup competitions.

The Glossop fighter will face Lukas Reiter (AUT) in the first round, the winner going on to face Olympic silver medallist Rustam Orujov (AZE).

Fellow -73kg judoka Dan Powell goes in off the back of a good win at the Mixed European Judo Championships against Dzmitry Minkou (BLR).

James Hayes (-81kg) makes his Grand Prix debut in Zagreb. Hayes fights for just the third time this year when he’ll take on Serbia’s Jovan Niskanovic. WRL No.6 Aslan Lappinagov awaits the winner in the second round.

Stuart McWatt finished seventh at the Zagreb Grand Prix last year and he will be aiming to better that this week. The Garioch judoka is continuing to build experience at this level comes in off the back of a gold medal at the Saarbrucken Senior European Cup earlier this month.

Morocco’s Achraf Moutii is first up for the British judoka.

Natalie Powell (-78kg) will be aiming to win her first Grand Prix medal in Zagreb since 2014. The former WRL 1 has had a solid year to date with three bronze medals including a third European Championship medal.

Powell faces Croatia’s Karla Prodan in her first contest of the day.

Also at -78kg is Jemima Yeats–Brown in the Ryecroft judoka’s third competition at this weight. The former Junior World medallist won bronze at the Saarbrucken Senior European Cup last time out.

Portugal’s Patricia Sampaio is first up for the British fighter with a potential quarter-final against World champion Mayra Aguiar (BRA).

Sarah Adlington (+78kg) made a good start to qualification with silver at the Madrid European Open at the start of June. She will be looking to bring back the form that saw her win three Grand Prix medals in 2017 as she has home judoka Zrinka Miocic (CRO) in the first round.

At -90kg Max Stewart made his return from injury at the Hohhot Grand Prix in May. The Birmingham judoka has good memories of fighting in Zagreb, winning bronze at the 2016 Grand Prix.

Stewart will take on Finnish judoka Jaakko Alli in the first round.

Frazer Chamberlain will be looking to get back to winning ways in Zagreb. Chamberlain made a strong start to 2018 with fifth and seventh place finishes at the Tunis and Agadir Grand Prix.

GB Judo Weekend Preview: 28 – 29 July 2018 Scroll to top
Select the fields to be shown. Others will be hidden. Drag and drop to rearrange the order.
Click outside to hide the compare bar
Compare